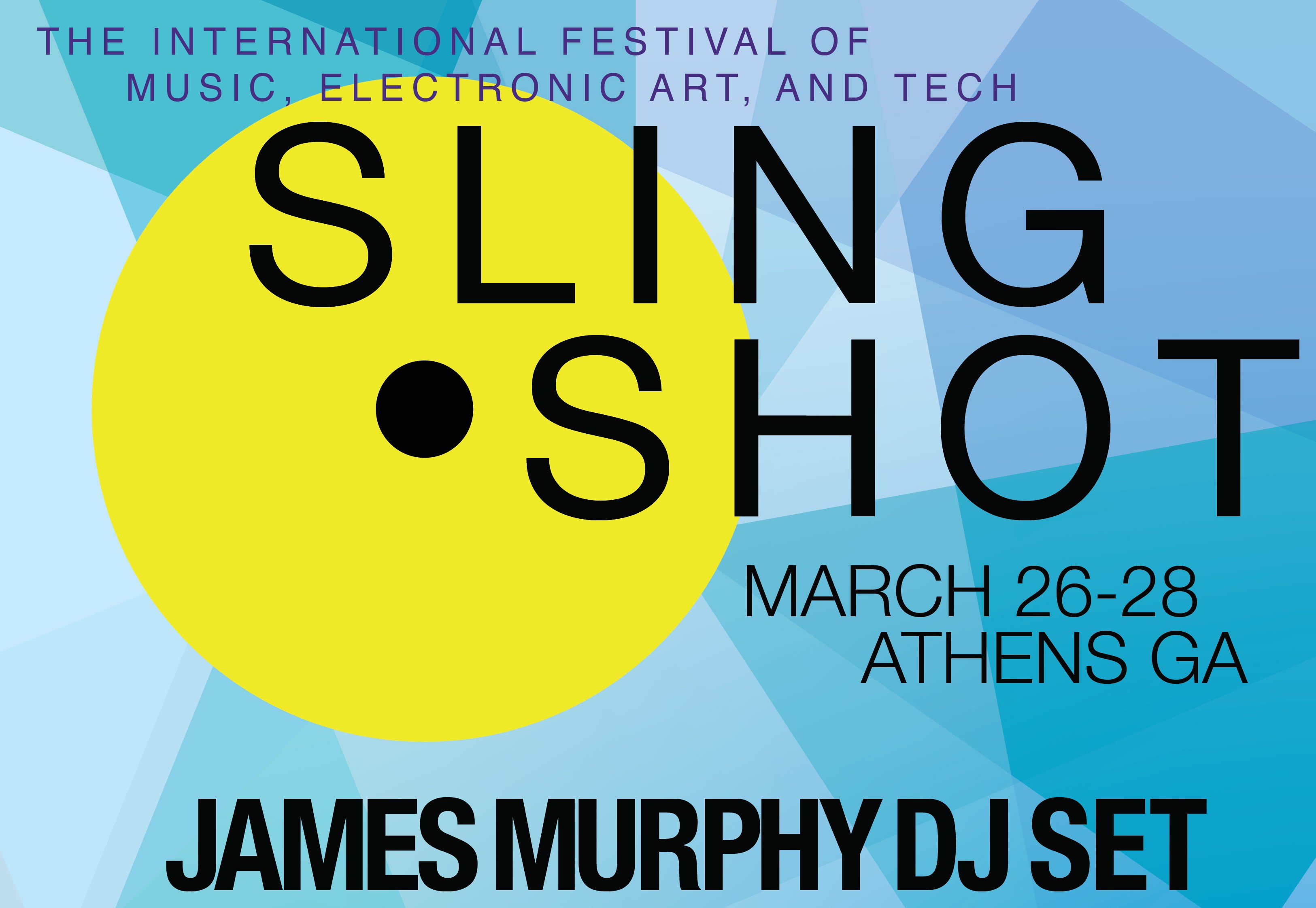 Ahh, spring. That magical time when the freezing rain subsides, the hillsides grow wild with kudzu, and Slingshot slingshots itself back into town. This year’s lineup is as eclectic as it’s ever been, but with significantly bigger names set to fill the marquees of Athens.

Arcade Fire’s Win Butler will be doing a DJ set as DJ Windows 98, as will James Murphy of LCD Soundsystem. Reptar will be playing a Georgia Theatre album release show, and cameos will be made by Jamie XX of the xx and Andy Hull of Manchester Orchestra.

As always, your best bet is to buy a three-day pass. Here are the 15 shows we’re looking forward to the most.

One of the most unique things Slingshot brings to Athens is the wide variety of thought-provoking electronic art installations. Last year saw hand stitched QR codes, weather balloon projectors, and a ton of reinvented psychedelic imagery. Though the installations are spread across downtown, they’ll be somewhat centered around Creature Comforts. Check out the electronic artists page to see what you’re in for.

Athens’ favorite chill pixie dreamgirl Ruby The Rabbitfoot will be playing Hendershots on Friday, in support of her recent release New As Dew as well as even newer material like “Hooky Queen.” She’ll be joined by The Viking Progress, whose appropriately boat-themed songs use the same sad, droning horn sections of Neutral Milk Hotel‘s past.

Though the billing may sound like a picnic gone horribly wrong, don’t sleep on either of these bands. Cottonmouth‘s alien sounds would fit in well with the electronic art crowd – though “avant hip-hop” is thrown in occasionally, this is a group of whacked out sonic explorers. Atlanta-based SEX BBQ are a little more Ath-traditional, with surf guitars bumping up against coy vocals and playful rhythms.

Shehehe are a good time any way you slice it. Whether it’s the straight-ahead punk of “Rollin'” or the Corin Tucker-aping “Hail Vagina”, they are in the lucky position of keeping several punk traditions alive. Little Gold, on the other hand, bring trashy Detroit-inspired rock and roll to the table. But what would an Athenian fest be without some indie psych? To be sure they are (generally) a psychedelic band, and their sound is concise but sometimes hard to pin down. Their recent single “Sleep Is Forget” plays like the Byrds fed through Ian MacKaye’s tube amp.

Speaking of Ian MacKaye, every punk and hardcore band Athens has ever hosted owes much of their sound to the D.C. hardcore scene of the 80s and 90s. Obviously artists like Minor Threat, Fugazi, and Government Issue ring out, but Salad Days digs deeper into the Dischord vault. Check out the trailer here.

Here at Vinyl Mag, we love ourselves some Normaltown, so their showcase on Saturday is a must for those getting overwhelmed by the explorative nature of psychedelic rock. Rootsing things down will be Cicada Rhythm with their particular brand of almost jangle noirgrass, plus the back-to-basics country crooning of (somehow Canadian) Daniel Romano. Athens legend and Man About Town Dave Marr will also be there, so, you know, ’nuff said.

Slingshot also brings the laughs every year, and in 2015 we’re lucky enough to host these big names in alt comedy. That podcast you listen to? Kurt Braunohler has most likely guested on it. And don’t forget his IFC gig hosting the absurd gameshow Bunk!. Ron Funches has rolled through various late night standup corners to muse about Black tuba players and the inherent freakiness of identical twins. Kyle Kinane has guest starred in a ton of shows and movies, and his specials Whiskey Icarus and I Liked His Old Stuff Better show his wide comedic range.

Like the Normaltown showcase, Thursday’s GATH shows will be stripped down and based in purer southern traditions. Roadkill Ghost Choir play a shimmering, steroid-popping type of noirgrass that occasionally slips into War on Drugs territory. Andy Hull of Manchester Orchestra drops the yowling southern shoegaze affectations when he goes solo – most of his songs are him and an acoustic, featuring more personal and plaintive songs about growing up as a pastor’s kid. And Ryley Walker’s Voice Of The Seven Thunders-esque guitar work is a can’t-miss; he’s also something of a vocal dead ringer for Jim Morrison.

Athens being the Classic City, the old is bound to intermingle with the new. This juxtaposition will be in full swing on Saturday with the jazz stylings of our own Kenosha Kid, and Etiene de Rocher, an Athens transplant from the Bay Area. Kenosha Kid are known for modern reinterpretations of stalwart jazz ideas, and they play Hendershots all the time so they’re very comfortable in that space. Etiene de Rocher’s music is a grab bag of 60s and 70s influence, and songs like “Juniper Rose” sound like a newly-discovered section in “Suite: Judy Blue Eyes”.

A hometown Reptar show is a special thing to behold, but throw in an album release and you’ve got grounds for another broken floor (hopefully the Theatre is built better than that.) The Joyful Noise recruits will be joined by Skylar Spence, who are similarly funk-sample laden. And make sure to get there early for Fascinator, whose of Montreal-emulating visuals pair nicely with their paranoid, ravine-jumping, Beastie Boys-emulating sound.

The beach-punk-spazz stylings of Monsoon is probably the best live show in Athens right now, so see them any chance you get. Playing alongside them on Friday at the Live Wire (formerly New Earth) is the Canadian hardcore four piece Single Mothers, who sound uncannily like a pissed off Hold Steady.

Japan Nite 2014 was a festival highlight, so don’t expect anything to change this time around. Peelander-Z are making a colorful return to Live Wire, along with fellow Japanese punkers Tsu Shi Ma Mi Re, Quorum, Bo-Peep, and Zarigani$. The fin. will be there to slow things down a bit, with their melodic M83-influenced plinks. God Bless America and all that, but expect these whippersnappers to remind us what punk started as in the first place. There will be leather jackets, and there will be ‘tude.

3. Night of Too Many DJs feat. Michael Lacowski of Pylon, DJ Windows 98 aka Will Butler of Arcade Fire, and James Murphy of LCD Soundsystem  (Saturday @ GATH)

Okay, when these names are all sharing the same stage, “too many” doesn’t really apply. Deejaying may not be the same as seeing these folks’ full ensembles, but consider the wealth of musical knowledge that will inhabit the Theatre on this night. This will be the dance party to end all dance parties.

Our showcase will be kind of trippy, man, so prepare yourself. Dream Boat do indeed sound like a boat to your dreams – they create experimental, faraway sounding beats that vaguely resemble church bells. Prince Rama are more concerned with melodies, but are similarly characterized by distance – their heady songs have Warpaint grooves and creepiness, with plenty of chanting, obviously. Nightmare Air are what you might imagine an all-werewolf band to sound like – dark, loud, and dangerous, but still pretty compelling.

Mind Brains are one of the latest iterations of Athens’ storied psych scene, featuring former of Montreal and Olivia Tremor Control players. Like its predecessors, Mind Brains have invented a world for themselves; they classify themselves with monikers like “experimental” and “muffins”, and their press kit states thusly: “Mind Brains’ new album drops on Hamuary 666th, 1945, and hearing it is not unlike happening upon a horde of corrupted Gregorians using garbage-picked toys and circuit-bent home-aids to worship at the high pagan monoliths of Silver Apples, Tubeway Army and Chrome.” Nana Grizol use crunchy indie rock to backdrop singer Theo’s sad, emotive lyrics, and while they may not be as quirky as Mind Brains, they’re a little more danceable. Horns and handclaps will be plentiful.