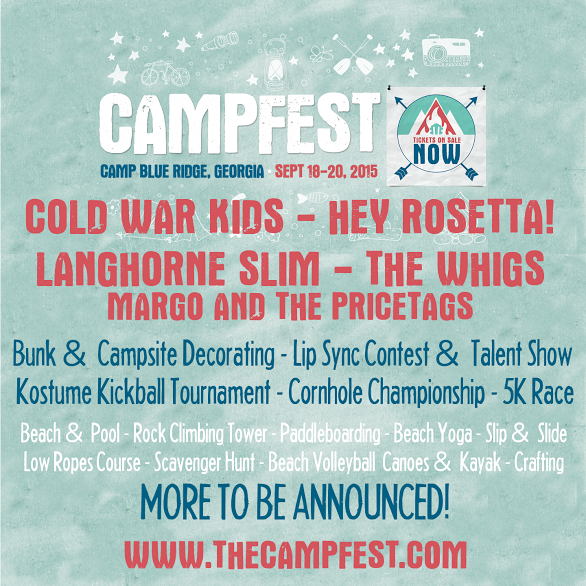 With the recent news that Wet Hot American Summer is getting a Netflix reboot, it’s easy to slip into campy (sorry) nostalgia. Think back to the halcyon days of food on sticks, eau de bug spray lingering in the air, and weirdly intense two-month friendships which end in unfulfilled promises to “totally write to each other like all the time!!” If you find yourself missing summer camp, then boy, do we have good news for you: Campfest. Is. Here.

In the same way that Dave & Buster’s is a Chuck E. Cheese for adults, Campfest is a return to the cherished American tradition of outdoorsy, activity-packed summer camp – with a musical twist. We could tell you about the crafting on crafting on crafting, or the karaoke and cornhole competitions, or even the festival’s preposterously picturesque location at a real summer camp in the Blue Ridge mountains of Georgia. But this being Vinyl Mag we’re gonna tell you about the surprisingly rad band lineup.

Making an appearance at the inaugural event are Cold War Kids, the Whigs, Langhorne Slim, Roadkill Ghost Choir, Hey Rosetta!, and Margo and the Pricetags. What better way to stay warm (as warm as you’ll want to stay on a September night in Georgia) in the mountains than a few great bands playing anthemic, ringing rock and roll?

Indie rock is a broad umbrella. If you’re into the harsher, rawer chord assault side of things (as this writer surely is), the Whigs are your bag – check the nuclear bomb that is “Someone’s Daughter”. And you know we always love giving shoutouts to the hometown heroes. But for the mellower folks out there, Cold War Kids and Hey Rosetta! make what I like to call midnight music. It’s contemplative, heavily reverbed, and is generally good for looking thoughtfully out of a car window at the world racing by. Hey Rosetta!’s excellent 2015 record Second Sight is full of such offerings. Cold War Kids, as most of you probably know, make alternative piano ballads that are the perfect comforting nightcaps after a long day of adult league dodgeball. And then there’s the funk side of things, brought to Campfest courtesy of Alanna Royale and her Dap-Kings vibiness. Goes without saying that this lady has a killer voice.

Alternately, Langhorne Slim (nee Sean Scolnick) prefers the rootsier side of bouncy acoustic rock. Though he hasn’t released music since 2012, his discography goes back nearly a decade and is full of fantastic bluegrass-informed numbers like “Coffee Cups” and “Set Em Up”. Speaking of roots music, you mainly need to get your ass here to see newcomers Margo and the Pricetags. They hail from Nashville and unfortunately aren’t on Spotify yet, but that’s no excuse not to fall in love with her whip smart back-t0-basics country.

It’s worth mentioning that Campfest, which runs September 18-20 in Camp Blue Ridge, GA, isn’t even done announcing its full lineup. Wristbands and day passes are on sale here, but why the heck wouldn’t you want to overnight it?