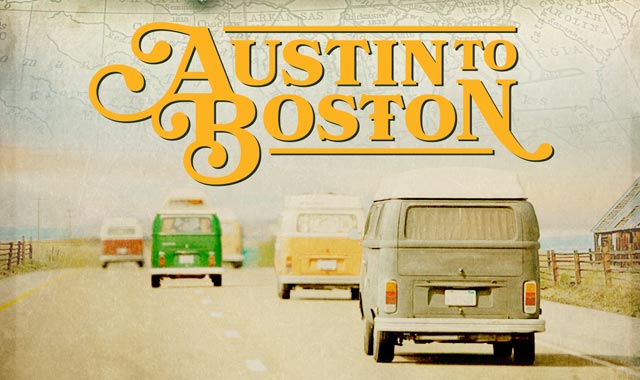 The thrill of a concert comes with the experience to hear and (more importantly) feel your favorite music live and to see your favorite artist in the flesh. Still, there’s the barrier that separates an audience member and the artist from individual, face-to-face interaction. Although we can relate to an artist on a personal level through song, we’ll never get to have a conversation with them, or at least it’s rare.Now on Netflix, Austin to Boston (2014) closes that gap with honest interviews and a look at what goes on off-stage. And, although we can’t ask the cast of Austin to Boston any questions, James Marcus Haney brings us closer to them in his second music documentary, his first being No Cameras Allowed, which followed Edward Sharpe & the Magnetic Zeros and Mumford & Son.

Gill Landry of Old Crow Medicine Show narrates the documentary in his fluid, Louisiana tone. 5 Volkswagen camper vans carry the cast, among which are producers Ben Lovett and Ty Johnson, as well as director James Marcus Haney, along with 4 bands: Ben Howard, The Staves, Nathaniel Rateliff and Bear’s Den. Leaving from Austin, Texas, the gang travels in a zigzag across America, playing at venues along the way. Their final destination: Boston. Landry introduces each band. Ben Howard, a singer songwriter from the UK, not as well known in the States but still his songs are familiar and his performances energetic; The Staves, a trio of sisters also from the UK, whose voices are hypnotic in their simple harmony; Nathaniel Rateliff, his music an open door to his heart; finally, Bear’s Den, a group of fun-loving guys playing great music.

Each band is different, but talented in their own ways. Although 3 thousand miles takes a toll on even the best of friends, the bands find common ground and friendship in their art, and eventually grow to be a family, all for the sake of memories and music.

Austin to Boston is now streaming on Netflix.