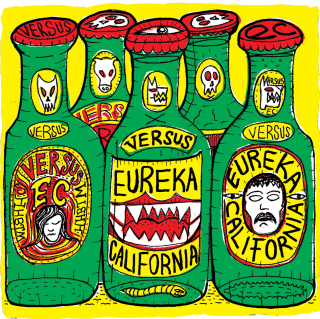 Eureka California is a hidden gem of Athens, Georgia. While the music scene in The Classic City presents a plethora of dreamy sounds and echo effects, the indie rock duo exudes a sound that samples from the 90’s rock style and references classic authors and musicians alike. With lyrical spin-offs of Simon & Garfunkel and Martha & The Vandellas, Eureka offers a refreshing sound. The duo consists of guitarist, Jake Ward and drummer, Marie A. Uhler. While they’ve been playing together for five years and may be a relatively new band in the Athens music scene, there is no doubt that this pair is comfortable in their own skin.

Eureka drops their new album, Versus (HHBTM Records), on March 25th, but they’ve been kind enough to give Vinyl Mag an early preview. Versus was recorded at Suburban Home Studios with MJ of Hookworms. The album opens with “Eureka California’s Night In.” The music video features Ward and Uhler walking to Athens’ own Little Italy for a slice a pizza and ends with a night on the couch watching what can only be an endless vortex of cat videos. Stylistically, Eureka is energetic with a hint of cynicism. Ward’s powerful vocals and stark guitar melodies are amplified by Uhler’s merciless drumbeats.

Lyrically, Versus embodies the isolation that comes with the uniformity and calamity of living in a cityscape. Eureka cleverly combines lively melodies with lyrics about passing up a night on the town for a quiet night in the house. Ward sings about the pageant that is Athens nightlife, although this can be applied to any city with a string of bars dedicated to millennial past-times, “I’m much too slow for a social animal.” In a city where 2 a.m. beckons the “final call”, you ask yourself, “Where did my time and money go?” Consequentially, you believe your night would’ve been better spent indoors, as Ward explains, “When I turn on the TV it makes me feel like someone’s home.” How often do we feel a strong sense of closeness to the voices coming through our televisions? There’s a strange comfort that comes with the mindless drone of advertisements in a city where nightlife conversations consist of platitudes about college majors and an uncertain future; it certainly can make you feel like “the only living boy in Athens, Georgia. However, it would be unjustified to deem Eureka as “recluse,” in fact, it seems that they also know how to have a good time, as Ward explains a typical night on the town, “Wearing clothes that I found at the bar, and I’m sobering up in the back of your car…Summer’s here and the time is right for getting black out drunk in the street.”

While the city harbors a sense of romance and unity from an outsider’s perspective, Eureka California seems to transport their listeners through the shenanigans that come with warm weather to the underlying loneliness that comes with being in a large crowd. Eureka can hang, but they also know the importance of solitude and self-awareness. Versus is dance inducing, fun and cohesive, but Eureka’s identity comes out in the lyrics. A smart listener should appreciate the modern rock group’s energy and be able to peel back the layers of their upbeat sound to find Eureka’s ability to reference reality in a subtle stream of lyrics.