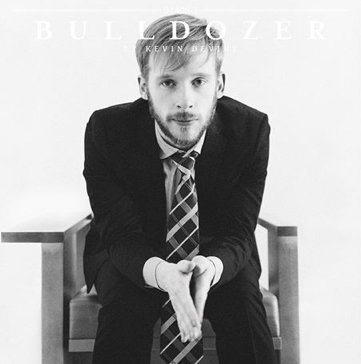 Recently got to chat with Kevin Devine for our SECOND interview (I LOVE this job).  In addition to catching up about what he’s been up to since our last interview, we talked about his current tour, his new label Devinyl Records, and the release of his two new albums, Bubblegum and Bulldozer (if you haven’t listened yet…come on…get it together).  Enjoy.

Vinyl Mag: How have you been the last year?

Kevin Devine: I’ve been good, making a record, tending to home life, and getting together for all the stuff this year.

VM: When did you start writing both records, Bubblegum and Bulldozer? Did you write them separately?

KD: I wrote most of both between December and March of this year – all of Bubblegum in that time – and there were a couple of songs off Bulldozer that were ideas. I finished them and wrote a bunch of other songs in that same time frame, though.

VM: Tell me about Devinyl Records.

KD: It’s really not much of an enterprise to talk about yet; we just really wanted to have something to put on the records and something that could be a name to put on any music from this point forward. We don’t know much beyond that. We’re going to put our name on things we like and help artists we like at least have access to our audience. Essentially all it means right now is running it through our social media and putting it out to press people that have a label association. It’s really me and three other guys that manage it, and we’re running it out of their garage. I don’t know what it will become or won’t become, but it is nice, for now, to let it be what it is.

VM: When did you decide to go that route?

KD: I was tired of trying, and I didn’t feel like the label was interested at all. I felt like if a disinterested label could help the record perform in the marketplace, then I could make it myself. At least I’m not putting the armor on getting ready to have a boxing match. We have enough of a fan base that we can go through the people and figure out how the get the records out in the world and somewhat heard. I knew it wasn’t an enormous risk. It wasn’t like starting up and trying to do it. I think the risk was more about whether or not we would be able to take operational steps forward. I kind of thought we weren’t; I thought we were going to have to put the record down. In a secular record label, there’s a bunch of people working there. When you just have three people, that’s not the case, but it was one of the best rolled out albums we’ve ever had. I don’t know if that speaks well of our efforts or poorly about the labels we’ve dealt with; it seems like so far, it’s the most visible we’ve ever been.

VM: How has the response been to the album?

KD: Gratefully, it seems like people have really liked the album. There is a level of excitement that was not present last time. It seems like we are getting some interest from people who were maybe not interested prior. It’s always nice when you’re this far into your career to have new people coming in; it’s not a given. I look at these records as an 18-24 month project, actually more like 30-36 month, from the writing and conceptualizing to where it actually ends. I’m really grateful for the response, but I’m also trying to conserve energy and just put one foot in front of the other. We need to try and sustain some kind of momentum for a while, and my effort needs to be as unflagging as possible. I’m really excited with how it’s come out of the gate, and now it is just trying to keep our blinders up and not worry too much.

VM: What made you decide to release them simultaneously? Did it just happen that way?

KD: No, it was planned from the beginning that way. They were written at the same time and recorded consecutively. To me, it represented a specific time in my songwriting and in our band’s song development. We needed to have them out at the same time to kind of act as counterpoints to one another. They’re very different albums, but you can tell they came from the same time. It’s kind of fun to do something there is not a precedence for. If I had gone into a record label and said I wanted $100,000 to make two records to come out at the same time, they would have scoffed and said no. I think it’s the fun thing about doing it this way – why not? Just do it.

VM: How do you choose which songs go on your solo, and which ones go with the band?

KD: It seems pretty obvious to me which ones went where. I don’t really know, except that there’s something about the chord and voice and the feeling of the songs. You know how there’s up tempo stuff on Bulldozer, and the ‘I-don’t-care-about-your-band’ stuff on Bubblegum? It just seemed like they fit. I think the Bulldozer songs is more about how they were written; with the power chords, it’s just a little more straight up. That stuff was apparent to me as it was getting worked out. The only song where I had two ideas was “She Can See Me”, and I thought Bulldozer was going to have more of a Belle and Sebastian sound, so I took it that way. It ended up going a different way, with the one on Bubblegum having a Nirvana cover sound. They both went different directions even though they’re both pretty up tempo.

VM: Jesse Lacey [Brand New] produced Bubblegum, and I saw in another interview that you said it would have been totally different without him. What inputs did he have on the record?

KD: I think anytime you make a record with anyone, the record would be very different without them. I think it is from collaborating with people. I think the record is very suited to Jesse’s tastes and strengths. We benefitted greatly from him being a “song doctor” who obviously has a lot of experience with the catchy, internalized rock music. He knows how to write rock pop songs that also have brains. There’s a critical difference between punk pop and pop punk. I think Jesse and I saw eye to eye on what I wanted, and I think we got there. It’s fun, bouncy, loose, and wild, but also feels smarter than it could have been.

VM: I saw the “Bubblegum” video – did you come up with the concept?

KD: The director who made the video, Daniel Ralston, came up with that concept. He’s a really funny dude, had this idea, and I thought he executed it really perfectly.

VM: For the lyric video for “Private First Class”, did you have involvement in that?

KD: I kind of think that lyric videos are kind of stupid, but I also thought initially that Kickstarter was stupid. I’m often wrong about things. Just because something is done wrong by a lot of people does not mean you can’t try to do it right. I thought it was an opportunity to use some footage and have it be something interesting. I’m really happy with how it came out.

VM: You’re going to be at The Stuffing this year [in Atlanta]…how did you get involved in it? I know Manchester Orchestra hosts it.

KD: Yeah Manchester Orchestra hosts it – it’s their festival. I’ve been friends with those guys for almost seven years. We obviously did Bad Books together, and we’ve done however many Bad Books tours together. It was basically them asking if I wanted to do it, and the next year, they said they were doing it again. I opted to not do the main day, and am doing the acoustic day. It’s kind of a pain in the ass to be there ’til one in the morning on Thanksgiving and then flying back to New York exhausted. I also usually spend half of those holidays in New York and half in Boston, so it’s a lot of exhaustion and travel. So I had to tell them I wasn’t doing the main day.  I also have a show at Asbury Park in New Jersey the day before Thanksgiving, but since it’s more local I’ll be slightly less exhausted for Thanksgiving.

VM: Besides The Stuffing, what is next for the band?

KD: We have about three weeks left of this tour, all the way from California through the deserts through Texas up the eastern seaboard. Then, in January and February, we tour the UK and Europe. So that’s the plan.

1 thought on “Catching Up with Kevin Devine”