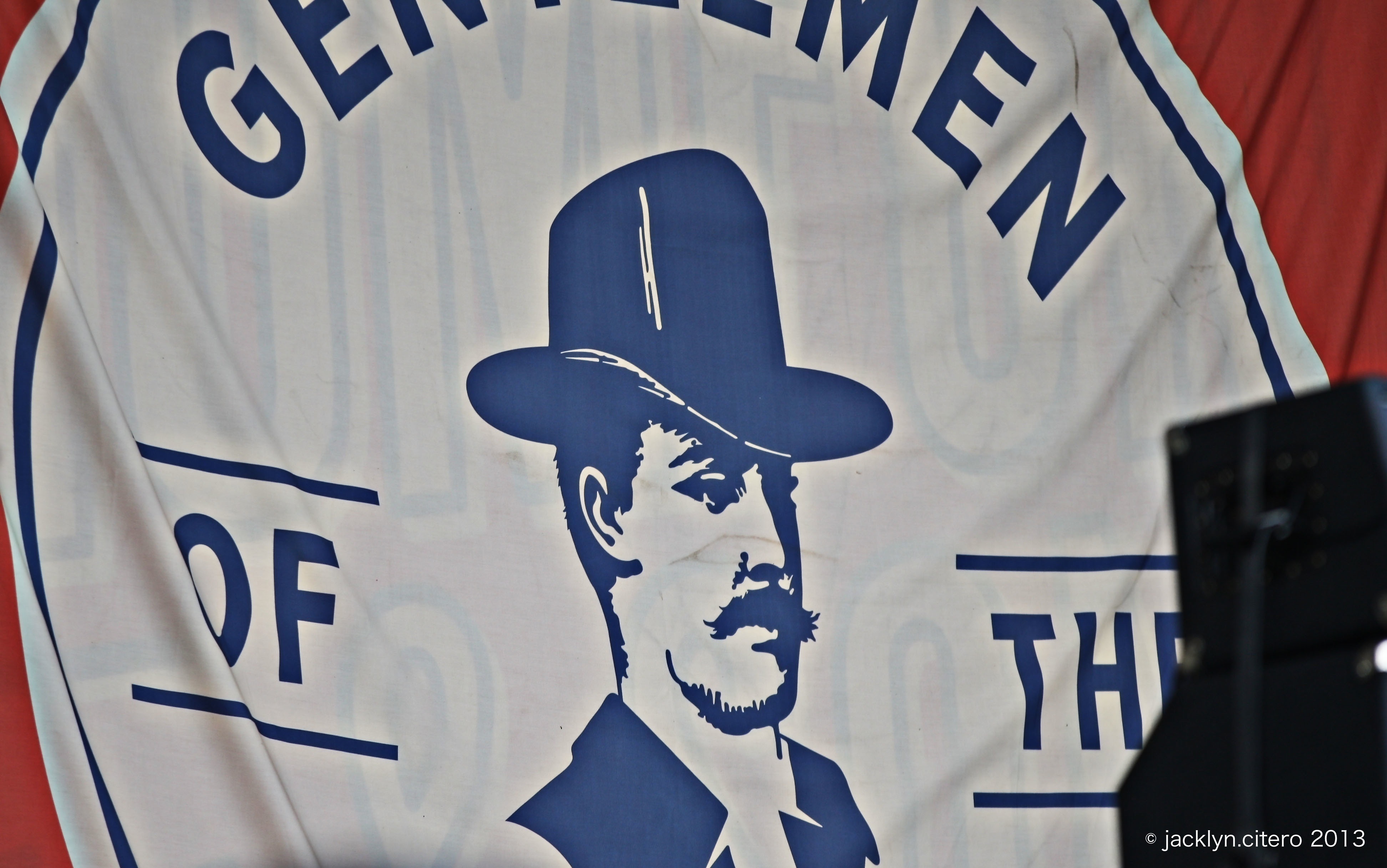 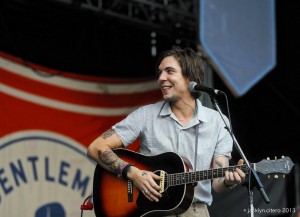 The sweltering heat that arrived with the second day of Mumford & Sons’ Gentlemen of the Road (GOTR) St. Augustine Stopover was the type of weather that made an air-conditioned hotel room seem like paradise. Knowing that the ocean was less than a mile away, it was hard to resist the beckoning surf and white sand while I made the sluggish trek to downtown St. Augustine and Francis Field. If it wasn’t for my love of music and The Hyppo, a local gourmet popsicle shop, and their stand within the festival I’m not sure I would have survived the day.

My arrival came right as Canadian indie rock band Half Moon Run was finishing up their set and just in time for American singer-songwriter Justin Townes Earle. Earle is best known for his artistry with folky lyrics with blues and country melodies, his father, alternative country artist, Steve Earle, and, perhaps after his Saturday performance, his semi-snarky and “calling it like he sees it” disposition. Astonishment and a “Who the hell does this guy think he is?” swept the crowd when he addressed the fact that he does not take song requests during any of his shows since he stopped playing for tips. He also added, “ You would know this if you came to any of my shows.” His cynical tone didn’t sit well with the audience after that commentary and many replied, “I won’t be coming to any of your shows with that attitude!” If I was on stage, I’m not sure I would have said that to a 10,000+ audience, but then again I don’t think I can really blame Earle. 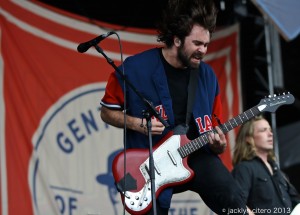 The sun was beginning to set behind the single main stage and crowds were still piling into the festival as The Vaccines took the stage. The English indie rock band seemed to bring a new life and energy to the festival as frontman Justin Hayward-Young poured his entire being into his red guitar and vocals. Putting it lightly, he rocked the shit out of that stage. His thrashing stage presence was reminiscent of gritty punk show you would only find in a seedy, black walled and graffitied club. Although The Vaccine’s sound was not as edgy, their set was more of a post-punk revival fuzed with pop rock.

The Vaccine’s solo set would not be the only time they had on the GOTR stage that evening. They would later share the stage with Mumford & Sons, but they also filled in as backing for fun.’s replacement, Mr. John Fogerty, former Creedence Clearwater Revival frontman. We can all appreciate fun.’s catchy tunes and bubbly performances, but there is no comparison to such an American legend and I must say this replacement choice was an upgrade. In addition to The Vaccines, Fogerty shared the stage with his son Tyler Fogerty and Mumford’s Winston Marshall. We were immediately served up the CCR classic “Susie Q,” followed by Fogerty’s “Old Man Down the Road.” Next up was a “Fortunate Son” that Fogerty and The Vaccines played with such ease you would have never known the efforts it took for all artists to get to this point. To fill the slot, Fogerty took an overnight flight from L.A. and spent the hours leading up to set rehearsing. 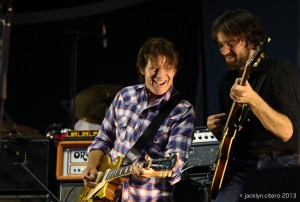 Without any surprise, Mumford & Sons came out for the remainder of this memorable set. Mumford and Fogerty collaborated on fan favorites “Down on the Corner” and a fitting swampy “Born on the Bayou.” As the lightening in the navy blue sky began to flash overhead, “Bad Moon Rising” rang out over Francis Field; Mother Nature could not have planned her light show more perfectly. A 25,000 person sing-a-long to “Proud Mary” concluded the set and as Fogerty left the stage festival goers cheered and pounded the air with their fists begging and screaming for more. At this point any, and I say this as if there even was any to begin with, disappointment with fun.’s cancellation was a very distant memory and Fogerty proved to be an absolute incredible choice because, as Marcus Mumford stated, “ John Fogerty was fucking awesome!”

Something between a captivating theatrical performance with a climaxing finish and a photographer’s nightmare unfolded as Mumford & Sons took the stage and performed “Lovers’ Eyes” to a packed out dusty field of thousands. Musicians and audience were immersed in total darkness as Marcus Mumford’s vocals struck the heartstrings of those in earshot. As the song intensified, particularly when Mumford roared the end of the chorus, the signature stringed lights that hung from stage to soundboard and stage lights would momentarily illuminate the faces of Marcus, Ben Lovett, Winston Marshall, Ted Dwane, and the 25,000+ in attendance. Although frustration could be sensed within the photo pit, under normal circumstances photographers usually only get the first three songs of performances to get their shots so the loss of one song was what I call a pain in the ass, I was nothing but impressed with the showmanship and grasp Mumford held on crowd; it was hard to not be hypnotized.

Thunderous stomping and dancing came with a blazing delivery of “Little Lion Man” and a raw emotional “Whispers in the Dark” filled with torment of uncertain loss followed. From a “I Will Wait” full of fervor to the comforting spiritual of “Timeshel,” Mumford produced a divine awakening within all who were in attendance. Mumford’s performance can only be defined as a revival of the soul.

The set finished out with more fan favorites, but they seemed to save the best for last. Gathered around one microphone and stating that it “Needs to be fucking quiet,” Mumford started the encore with a sweet and delicate acoustic cover of Bruce Springsteen’s “I’m on Fire,” followed by an a cappella round, almost too quiet for those in the very back of the field to hear, of “Sister.” After a serious start to the encore, The Vaccines and members of the band Bear’s Den joined Mumford on stage for an uplifting and sing-a-long promoting Beatle’s “Come Together.” For those seeing Mumford for the first time on their 2013 tour, this encore excited and entertained, but for anyone who was able to catch one of their shows, either in Atlanta, Georgia, or Simpsonville, South Carolina, earlier that same week, the encore was beginning to sound familiar and repetitive. The final songs of the evening were, of course, “Babel” and “The Cave.” Up until the encore I was absolutely enthralled in the music, but soon became disappointed in the standard and predictable set it had become.

This is what music that appeals to the masses has become; a regurgitation of songs that sound nearly identical to that being played on our radios, Pandoras, and studio recorded albums. Even down to the order of songs in the encore, practically everything about this show was the same as their performance in Atlanta only four days prior. Maybe this is just my jaded perception from going to countless shows over the years and becoming spoiled from performances that have hardly ever repeated songs in a similar fashion, let alone the same encores in exact song order as previous shows. Don’t get me wrong, Mumford & Sons is and always will be in my top artists I listen to. It is my recognition of them as outstanding artists and masters of their craft that allows me to know they are more than capable of producing cookie cutter sets.

Exhaustion and a need to escape the inebriated crowds started to set in as Mumford left the stage for one last time. As the mass exodus began, Australia’s Yacht Club DJ’s provided a 30 minute set of energetic mashups that seemed to give the extra oomph needed to walk the mile back to the hotel. With the curtain closed on the 2013 GOTR Stopovers, The St. Augustine Stopover proved to be one grand finale. From the beautiful host city to the extraordinary music and once in a lifetime collaborations, this momentous weekend will provide a lifetime of memories for all those who were in attendance. 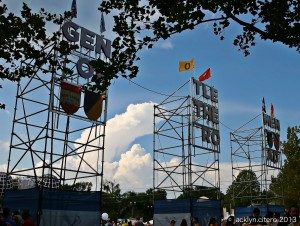 1 thought on “Gentlemen of the Road: Day Two”