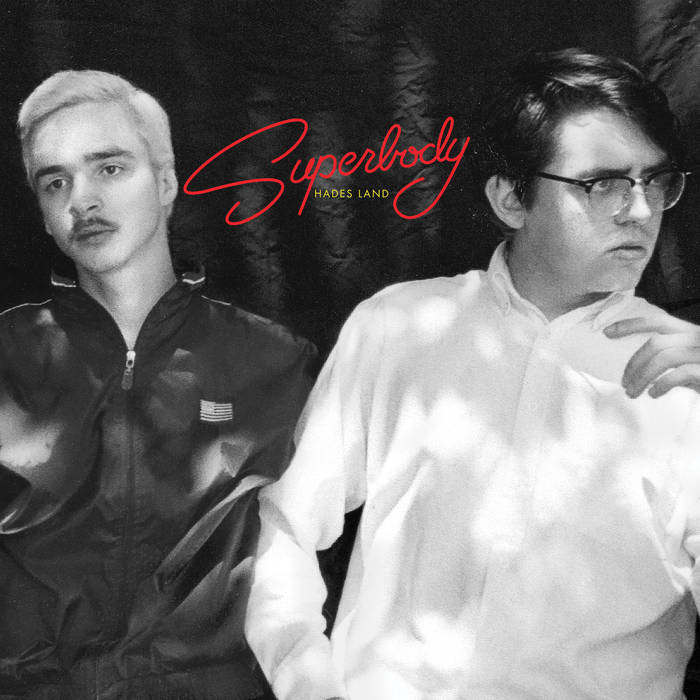 Superbody was born in the mountains of Chattanooga, Tennessee, the brainchild of Robert McCurry and Caleb Dills. The duo has only just begun; after 5 months, the band has produced their first full length album, Hades Land.

Vocalist, McCurry, brings the deep, pop vocals of the 80’s, while Dills softens the sonorous voice with dreamy indie sounds. The album opens with “Call Me That.”  McCurry’s baritone voice flows over a harmonizing layer of twinkling melodies. The video was directed by Athens’ own, Vann Johnson. The video really embodies the band’s ethereal persona, as McCurry wakes up in a world of surrealism, surrounded by montages of plastic toy animals and magazine clippings. McCurry walks through this world with a feminine poise, which lightens the low tone of his voice and adds a bit of humor to the colorful dream.

“Hands Up” employs a more industrial, noise style with a haunting melody, but the chorus comes through with airy “ooh’s” and an uplifting riff. “Wings 4 Two” follows with sweeter sounds and lyrics. This track definitely exhibits an 80’s pop sound, with samples from a female voice, “I don’t really care where we go, baby. It could be Paris, London or Little Rock for all I care…” The synth utilization is similar to that of Desire and Chromatics. Superbody exhibits the same ambiance, but continues to include a subtle and deep, indie sound that makes it all their own.

“5678” takes on a more upbeat sound with a funky riff and more synthesizer beats. Finally, “Fools Gold” completes the debut album with a rough, rock sound combined with a dreamy synthesizer melody.

Superbody has been born, and they’re definitely a band that we’re definitely interested in watching grow. It’s rare that a band comes along and creates something new. No doubt Superbody will continue to change their sound as they evolve, but we hope they remain constant in their originality and creativity. Imagine their live shows! Check them out at the Flicker Theater on October 7th and/or the 40 Watt on November 6th.