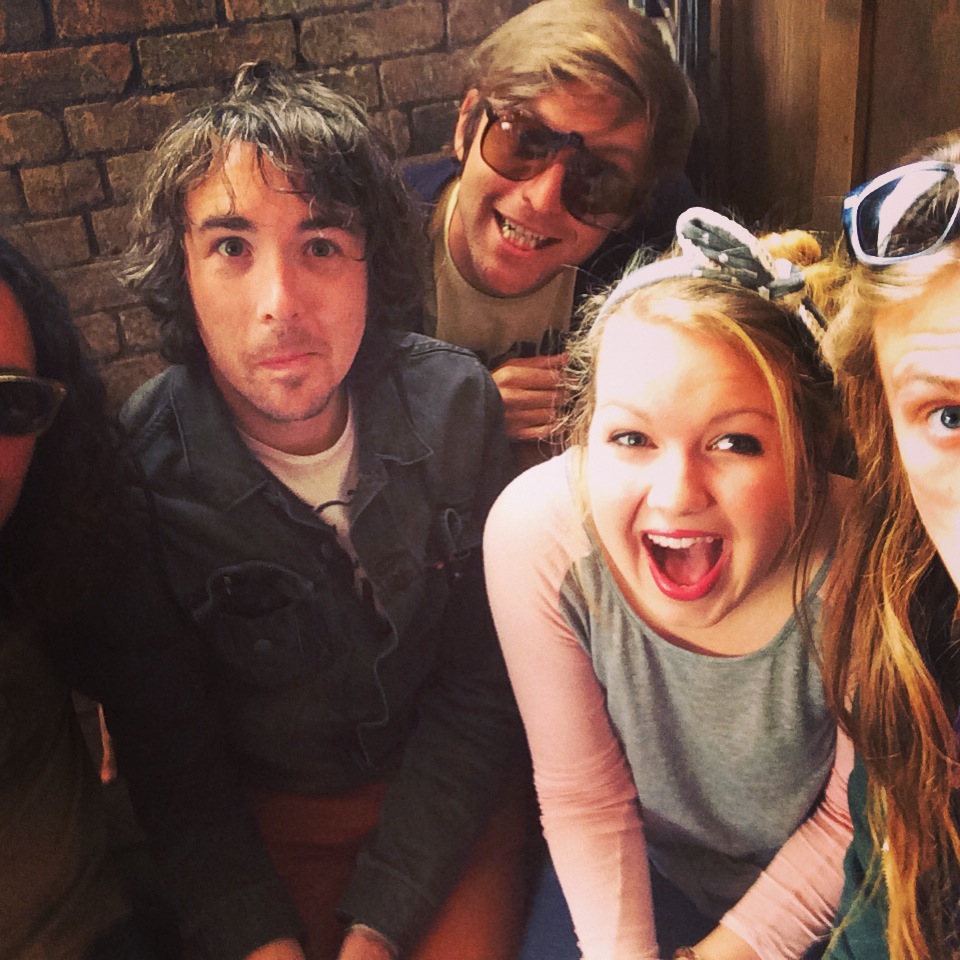 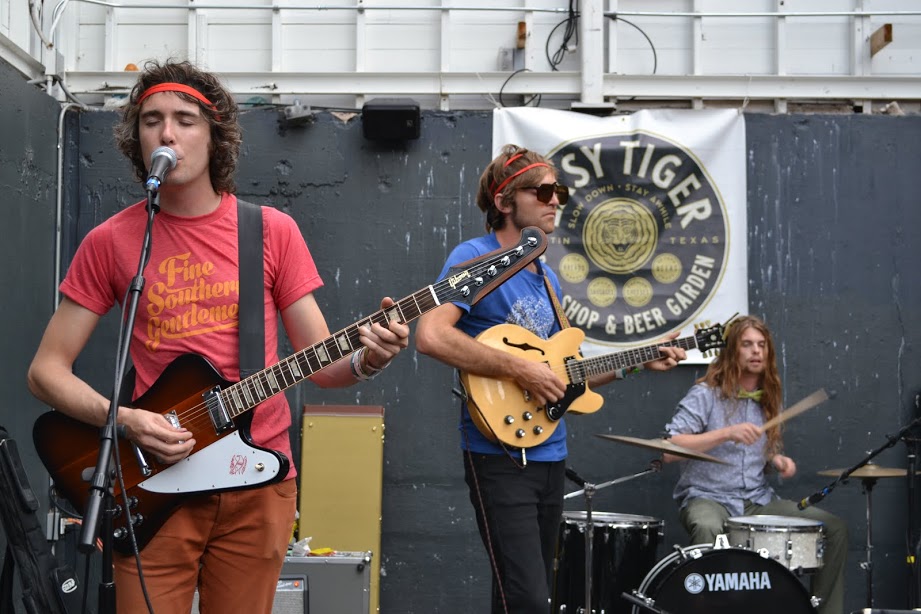 With an obscene total of 12 shows in five days, it’s a miracle that Cheers Elephant was still breathing when I saw them on the last day of SXSW at the PBR showcase. But they weren’t just conscious – vocalist Derek Krzywicki, bassist Travelin’ Mat, lead guitarist Jordan del Rosario, and drummer Robert Kinglsy were all full of energy when they played on the outdoor stage at Easy Tiger like this was their last (though far from it – they still had two more to go that same night).

I was certainly glad they were playing so many different events, because otherwise I would have never gotten to see what might be my favorite discovery of the week. Okay, I admit describing a band as having a “happy sound” is incredibly cliché.  But honestly, I think that might be the best way to describe this four-piece group originally from Philly. The crowd, including myself, smiled all the way through their creek-side set that was brimming with psychedelic pop rock guitars and Beatles-esque vocal harmonies that were like candy to the ear.

The crowd favorites “Leaves” and “Doin’ it Right” are testaments to the talent this group has of making quintessential road trip songs that can be played over and over without growing old, and sounding even better and more full of energy live than recorded. A contagious blend of The Strokes and The Kooks, this band is a must for any indie rock lover’s music collection. We had the great opportunity to hang with the band earlier in the week to ask important questions about their hairstyles, the origin of their band name, and more important stuff like that. Read on.

Vinyl Mag: You guys relocated to LA from your home in Philly. How has the transition gone? Has anything been particularly better or worse?

Derek Krzywicki: Around there, yeah. But it’s wonderful. We don’t have winter, so that’s great. [Leaving friends behind] was definitely a downside to moving though.

Robert Kingsly: We had a really close group of friends back in Philly, which we still have. That’s probably the biggest thing we miss about the east coast is our friends and family that are over there, but other than that everything’s been wonderful since we have been out on the west coast.

VM: You guys just dropped the lyric video for your song “Peoples.” Who was the visionary behind the project? How so?

Travelin’ Mat: It was just footage that our manager was taking on our tour last summer through a couple of really nice places like Maine, and the island off Maine. So it was just a lot of beautiful shots strewn together with lyrics on top of them.

VM: You guys have been at SX a few days now. Any other artists that have really impressed you guys?

Jordan del Rosario: Black Angels were really cool last night, but I think that is the only band we have really seen. Oh, and J Roddy was cool. We hope we see Train Conductor as well.

DK: But we are performing so much this year that we don’t really have a bucket list of bands that we want to go see. But if we do have free time, who knows, we might be trying to get some sleep.

VM: Any favorite moments yet of the festival or any showcases you guys are super pumped to perform?

DK: Oh yeah, tonight is going to be great, at 1 a.m. at the soho lounge – that’s our official showcase. But we are also playing Rachel Ray’s Feedback that has free beer and free food.

VM: Would you say your music has evolved since the formation of the band, and if so how?

JR: It’s gotten more mature and polished throughout the years. We were pretty young when we first started and didn’t really know what we were doing. But now we are pros.

VM: How did you guys agree on the band name Cheers Elephant?

DK: Kingsley is good at telling the story. But we didn’t all exactly agree.

RK: It all came down to the first elephant to come over to America, and along the way the boat ran out of wate,r because they underestimated how much they would need. All they had left was barrels of ale, so they gave that to the elephant. But once it got to America, it refused to drink water anymore, and it would only drink beer. So, of course, it turned into a Coney Island sideshow where you could pay a nickel and come watch the elephant uncork the beer, put it back. Hence Cheers Elephant, America’s first alcoholic elephant…

VM: What is your favorite venue you have ever played?

Travelin’ Mat: Summerfest was a fun festival that we played…it’s two weeks long, so its technically the biggest rock music festival in the world.

VM: What would you say your biggest influences are?

DK: Beatles, The Kinks, but everything and all sorts of music. Ethiopian Jazz to Train Conductor; it’s all the there.

VM: So you guys have won all of these really impressive awards, including best indie haircuts five years running. So how do you manage to keep your hair looking so not mainstream all of the time?

RK: You know, the key is to not over think it. Just let it happen.

TM: What everybody else is doing – just don’t do it.

VM: I know all of your loyal fans in Philly are dying to know – any chance you guys are headed back anytime soon?

DK: Maybe when it warms up a bit we will consider going back.