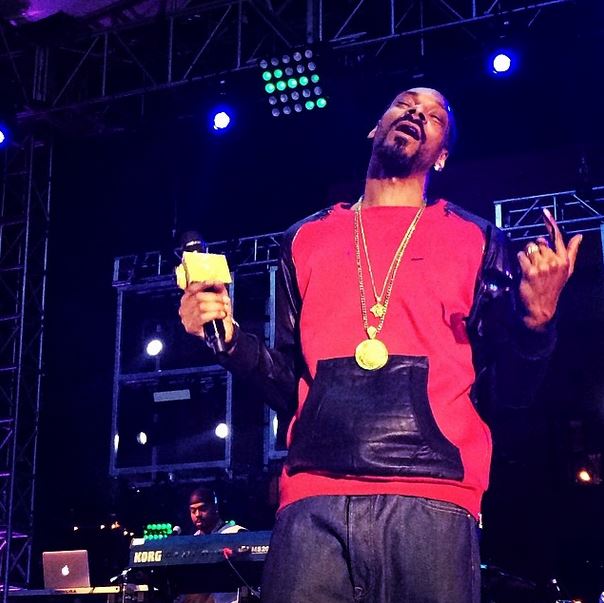 It had finally arrived. My last night of South By Southwest.  The lineup was as stellar as the venue. The stage was set up on top of the rooftop of the Starr Building in downtown Austin and loomed high above my head, an impressive structure that looked like it belonged on TV.

And on TV it will be, thanks to Guitar Center and DIRECTV who collaborated to film three entire days worth of great music not to be missed. The shows filmed at SX will be shown for the 8th season of GC Sessions, to air Sunday nights at 8 p.m. on DIRECTV’s Audience (channel 239) starting May 4.  And they were certainly ending with a bang, stacking the Saturday night bill with Phantogram and Snoop Dogg. 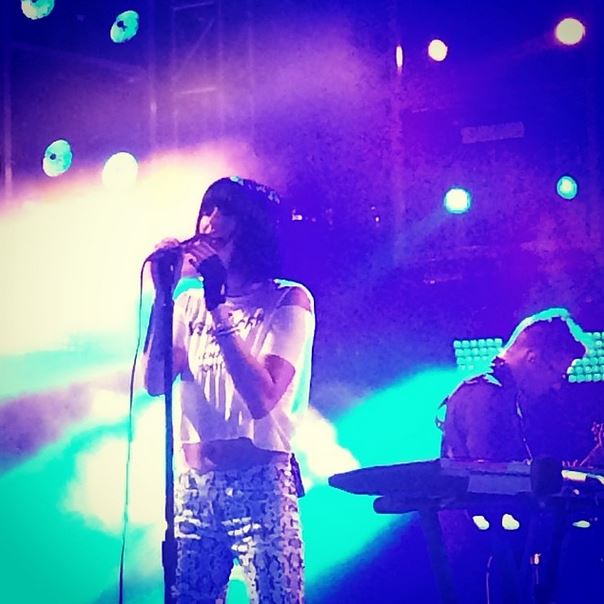 Up first, Phantogram dove right into what they know best — pop-synth rock at its most infectious and surreal.  The duo opened their set with “Nothing But Trouble,” the headlining track off their new LP, Voices. Sarah Barthel immediately grabbed the crowd’s attention with her stone cold power stare as she sighed, “I’m nothing but trouble, I’m losing my mind,” echoing into the crisp Austin air. The drum beat of “Black Out Days” sped things up a bit. Barthel’s voice rang out powerful yet eerily beautiful; she looked almost as striking as she sounded as her jet-black bob rocked along to the music. Her breathless vocals rang clear over the synth beats of the single off Voices, “Fall in Love.”

Yet, Barthel was not the only one singing. Josh Carter showed of his vocal chops on “I Don’t Blame You” resting effortlessly over a trippy back beat and the ethereal back vocals of Barthel These two shared a moment when Barthel’s mic failed, and Carter came to the rescue; the chemistry and tension was palpable. These two claim they are only friends, but I am not so sure….but whatever they are doing, we at Vinyl Mag hope they continue because it is certainly working.

There was a dramatic change of pace when Snoop Dogg took the stage.  Beats no longer swirled around the stage with smoke spewing from machines but came at us full force with a heavy dose of bass. An unexpected headliner for a show put on by Guitar Sessions, yet I can say that the most fun I had all week was three rows from the front of the stage on that roof singing along as Snoop rapped, “Bowowow yippy yo yippy yay.” Working both the crowd and the camera like a professional, Snoop Dogg (or should we say Snoop Lion, no Snoopzilla…ugh, we will just refer to him as Snoop for the sake of clarity), strolled across the stage with an ease that reflects his many years of experience.

The crowd sang along in full force as Snoop D-O-Double-G took it all the way back to 1993, “sipping on gin and juice, with my mind on my money and my money on my mind.” Snoop continued to keep the crowd going with his early 2000s hit, “Drop it Like it’s Hot,” as he danced with the life-size dog flaunting a rather large joint as he boasted, “I roll the best weed, because I got it going on.”

Snoop ended with quite the bang and crowd favorite “The Next Episode,” leaving us grinning ear to ear for what was the best possible way to end South By.

*Check out our Instagram video of Snoop emerging from the “backstage” area below!

If you weren’t actually present for the show, don’t feel bad – you’ll be able to experience it for yourself when it airs on DirecTV! Schedule below!

*Check out the incredible Soundgarden performance at the Sessions here!