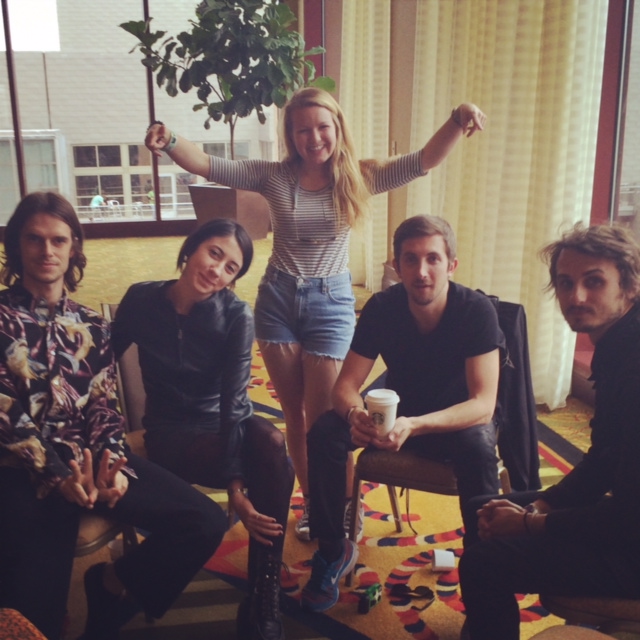 We here at Vinyl are not quite sure how to classify Hundred Waters. Are they indie? Are they electronic? Are they alternative? Perhaps their unclassifiable and refreshing sound is why we like them so much. Based out of Gainesville, Florida, all four members completed their self-titled album while attending the University of Florida (I guess we will let that slide this time. Go dawgs). This debut album garnered a significant amount of buzz, as producer and artist Sonny Moore (Skrillex) took notice and signed the up and coming group to his label, OWSLA. We met up with Nicole Miglis, Trayer Tryon, Paul Giese, and Zach Tetreault on the quiet third floor of the Austin Convention Center one sunny afternoon during SXSW to chat about their past year, their bucket list, and their evolving sound.

VM: 2013 was a big year for you guys, touring the US and the UK with acts such as Alt-J and The xx. How was that experience?

Nicole Miglis: It was a super incredible experience, and you learn a lot too, because you are opening for a band. And you are also like, this thing that you made in three months – this record that we made – we have had to stand behind for so long and learn how to adapt it to different situations. But meeting them was super inspiring, and they were really inspiring people to know and be around. It was incredible.

VM: You guys have a really unique sound that doesn’t really fit under a genre title. How would you guys describe your sound?

VM: Has your sound evolved since the beginning?

Paul Giese: Yes, quite sufficiently. Our first album was made before we knew that this was going to be our everyday and before we knew we were going to be playing it live especially. This new stuff comes from two years of only thinking about music and only thinking about what it means to be doing this and meeting all of these inspiring people in music, instead of having to divide between school and work and what not.

NM: Yeah, it’s a full time thing now for sure.

PG: We are like 100 percent into it, whereas before the world was dividing us.

VM: How did the band form?

Zach Tetreault: We have all played music in different projects like for forever. Trayer and Paul were in a band in early high school, and I started playing with them at the end of high school.

PG: Awesomely, we were called Awesome.

ZT: Yeah, their band was called Awesome. Then we had a little project called We Are Trumpets, and then in college we met Nicole at university, and I would always go see her do solo shows, because she has an awesome solo project that no body knows about.

ZT: Because she doesn’t let anybody know about it. And then we all joined this group together in college called Levek and toured with that, and then it sort of evolved into this. That’s the short of it, but yeah school and music bound us.

VM: So you guys have already performed here in Austin, TX for South by Southwest. How was that experience?

PG: Yeah, it was fun. We drove a long way and then flew and almost missed the flight. The show was all the people that were around most from where we drove. It was kind of funny, but it was good. It was a good beginning show, because it was really hard and rough, so it made us feel alive.

TT: It was our label showcase, which is OWSLA, which is like a lot of dance music mostly. And we don’t get to do a lot with them, because we aren’t really similar to most of the acts. This is one of the few things we have done with that family, so it was cool to be a part of it.

NG: Tonight, we are playing the Portal Showcase with Angel Olsen and Mark Kozelek, who I was obsessed with in high school, so I am super excited to play a show with him. He was like my first real music crush. I am super honored to be on that bill.

VM: Any particular show later in the week you are really looking forward to performing? Or anyone that you have already seen that really impressed you?

NM: We are trying to see Empress Of, but she is playing right now.

TT: We wanted to see Ms. Gaga, but we just missed her. We are standing right where she was.

VM: If you guys could perform at any venue, what would it be?

NM: I don’t know. I don’t really know enough venues to be honest. I feel like the most exciting thing to do would be to play at your own venue, like set up your own thing somewhere. I don’t really have any venues that I idolize or anything like that.

TT: You don’t really know venues until you play them.

VM: Who would you say your main influences are?

VM: If you guys could perform with anyone dead or alive, who would it be?

NM: I don’t know to be honest. The people that I know are the people I enjoy most being around and touring with and watching, because I know about their life. It means more to me when I see them perform.

PG: Let’s pick one. Let’s pick a dead fella. But how about watch instead of play. I think John Coltrane would be great, because it would be kind of sacrilegious to stop any time spent with him talking.