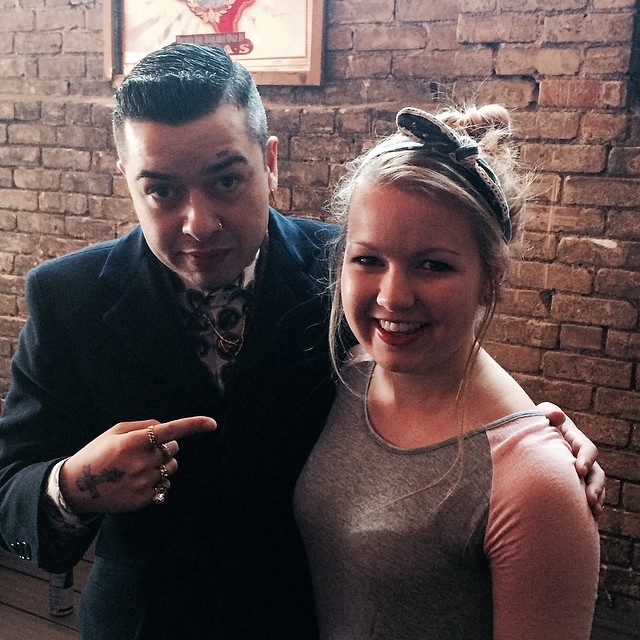 UK alternative punk-ska rapper iTCH has caused quite a stir overseas and is making serious headway over here with US tours with big names such as AWOLNATION and Black Gold. During the magical week that is SXSW, we were able to chat with him at the Chuggin’ Monkey in downtown Austin about his solo career, lyrical inspirations, and his new album coming out on March 26th.

VM: You used to be the front man of the ska-punk band The King Blues; what made you go decide to go solo?

iTCH: After 10 years of doing the same thing and people expecting that of me, I decided to do something a little different. During the early days of that band, there was always a threat of danger, and the police would come shut down the gigs, and it was edgy, and I got off on that danger in a perverse way. After awhile as it got bigger, it just got stale, and I stopped enjoying it as much.

VM: Your Current EPs The Manifestos are different from your old bands sound and instead infused with hip-hop and dance music elements. Why the change?

iTCH: Towards the last two King Blues records, were pretty much a mixture of hip-hop and punk rock but done from a bands perspective. But what I wanted to do with my solo work was take that to the next level. What I have tried to do is mix the lyricism, storytelling, and political background of hip-hop with the anger and energy of punk rock.

VM: I love that title of your 1st EP The Manifesto Part 1: How to F*cking Rule at Life. How did you come up with that; did you just wake up one day and decide that should be the name of the EP?

VM: So you signed with Red Bull Records, an independent record label that has had some pretty big names come through, like AWOLNATION and Black Gold. How has the experience of working with the label been?

iTCH: It’s been great. It’s the fourth label I have signed to, so I have been on DIY labels, indie labels, major labels, and I actually feel most at home here, like I have the most support and freedom to do what I want. I was speaking to many different labels, and they were the ones that really got my vision and wanted to bring it to life.

VM: Your song “Homeless Romantic” has almost 150,000 hits on YouTube; how does that feel?

iTCH: Awesome! Like, weird that that many people would bother watching it. But, obviously it’s really humbling, and it’s a nice feeling.

VM: Last year you teamed up with AWOLNATION for a segment of their tour; how did you guys get along?

iTCH: We definitely got along; it was cool, and it was really fun. It was actually my first tour as a solo artist, so I was definitely finding my feet and figuring out what to do, so it was nice to get to do that with them.

VM: The lyrics of your songs share a common theme of frustration towards politics and the government. Why is that?

iTCH: In the society that we live in, I think that political music is made to be a very confusing thing. And politics is almost a dirty word that seems very boring and dull. My lyrics are very simple, and I believe politics in general are very simple. People try to use big words and strange concepts in order to confuse us and leave the decision-making to them. But what it comes down to is you either believe people are equal, or you don’t and believe there should be very few at the top and the rest of us working and scrambling to keep them up there, or you don’t.

VM: What would you say are your main influences?

iTCH: For me, who I look up to the most is everyone from The Clash through to Public Enemy back to Woody Guthrey, Jimmy Hendrix, John Lennon – artists where it
wasn’t necessarily about how they sounded or what genre they were in.

VM: What can we expect from iTCH in the future?

iTCH: A new album coming out [on March 26th called The Deep End]; I am going to be touring the hell out of it. After this, I am going straight up the west coast, and I will be here until April.