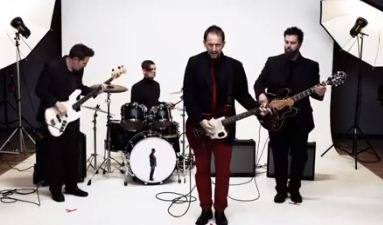 I received a vinyl copy of The Mike Benign Compulsion’s third album, Here’s How it Works. The record is a timeless medium and is slowly recovering. The cover of The Mike Benign Compulsion’s album is minimal. It is clean and completely white except for the title and a bald man standing on the right side. He’s watching you pull the record out; I think his face emotes something like approval. The record is as clean as the cover, but black. I’ve never seen a new record, most of the time they are used and deeply grooved. This one is smooth and classy, much like Mike Benign’s persona.

Benign’s recent release of the video for “Haley Daley” (check it out below) shares a similar style. The members are presented in front of a white canvas wearing mostly black, except for the Mike Benign’s fun-colored burgundy pants. I guess it’s true you that should never judge a book – or a record – by its cover. I thought The Mike Benign Compulsion would feature soft rock or something close to classical. I was wrong, and I’m sorry.

The album opens with “Mrs. Kean”, and I feel shallow. How could I have been so quick to judge? The Mike Benign Compulsion is way more lively than classical; in fact, they have a more pop-rock sound, which makes sense considering the members are pop-rock veterans from The Woolridge Brothers, The Yell Leaders, Blue in the Face, Arms & Legs & Feet, and Dorian Gray. At times, especially in “Haley Daley,” the harmonization has a Beach Boys feel.

Let’s talk about Haley. She follows “Mrs. Keane” and “You Say It’s Over” with a bubbly and poppy attitude. I know immediately that this is the song that will inevitably get stuck in my head. Benign’s melodic voices pairs nicely with the rhythmic, quick guitar strums, as he sings, “I’ve got a feeling you’re gonna crumble Haley Daley.” Then there are slower songs, similar to a lullaby, like “Bay Window”. The Mike Benign Compulsion doesn’t have to do much to change their tempo. They show that a band doesn’t have to be “experimental” to be talented.

Sometimes simple can be just as beautiful.