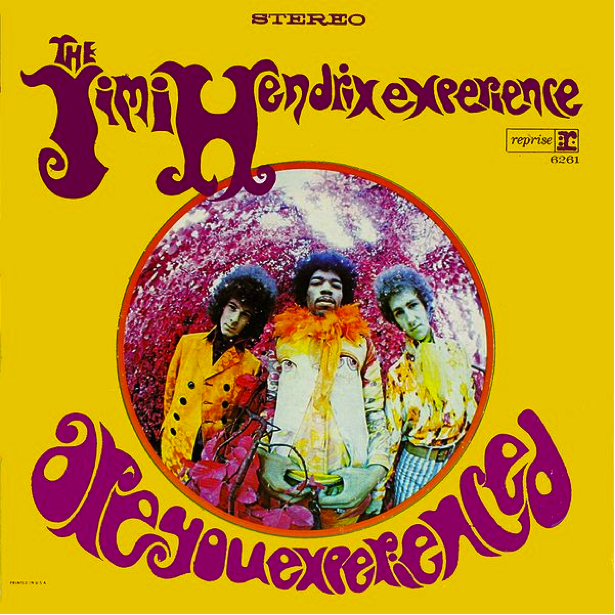 Our generation has been called the hippies of the new millennium; pot is legal, alternative couples can marry, and love and music are abounding in our culture and in our lives. And just as history repeats itself, so does fashion. Styles come back around and gypsy clothing has seen a new era of popularity. Who better to take fashion tips on that style than the man who led the Band of Gypsies himself? Jimi Hendrix truly pioneered the psychedelic look.  Yet while styles come back around, they change and adapt; they take on new meanings and new variations to reflect the new people that are wearing them. Danielle Jordan, sales associate at American Threads, and I put together some modern looks inspired by the big man himself. 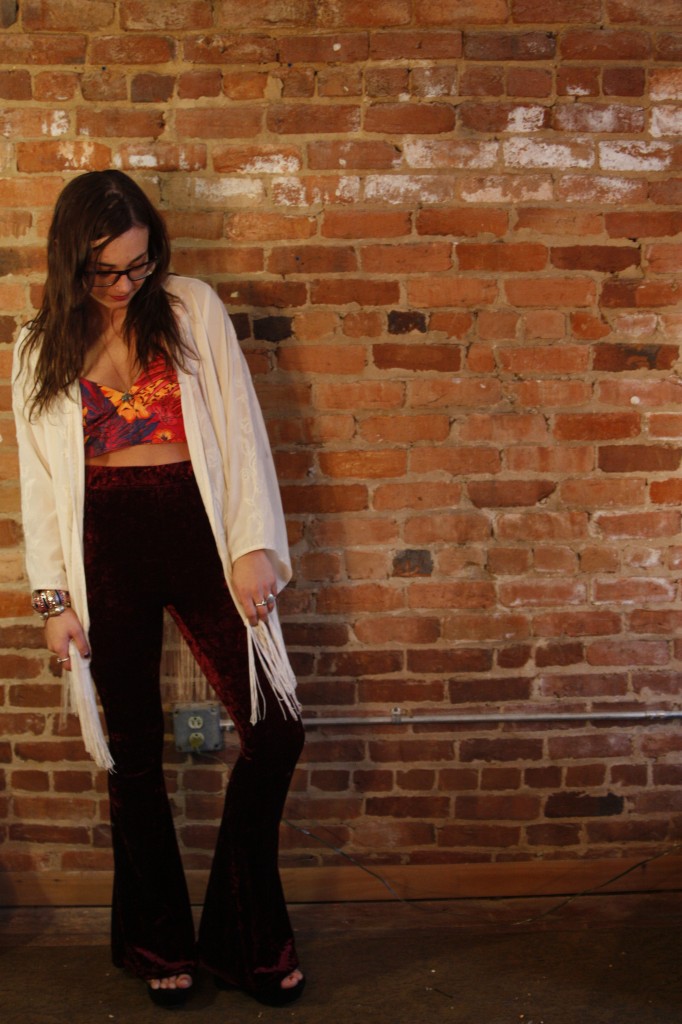 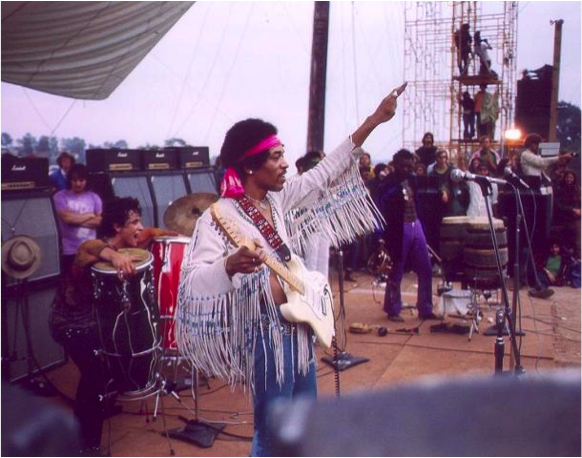 There’s no doubt Mr. Hendrix was the king of bright colors and fringe. This first outfit was inspired by Jimi’s outfit at the legendary Woodstock Music Festival. We paired this cream fringe kimono and velvet bell bottoms from American Threads with a brightly colored crop top from NastyGal.com to create a look that is equally prepared to take the stage at Woodstock or go out on a Friday night. Don’t be afraid to mix colors and prints that don’t traditionally go together. If people had never mixed musical instruments that did not “belong” together, we would have never had rock and roll.  Get your grandmother’s fashion rules out of your head. She may make delicious cookies but I’m betting she never lit a guitar on fire in front of thousands of applauding audience members. 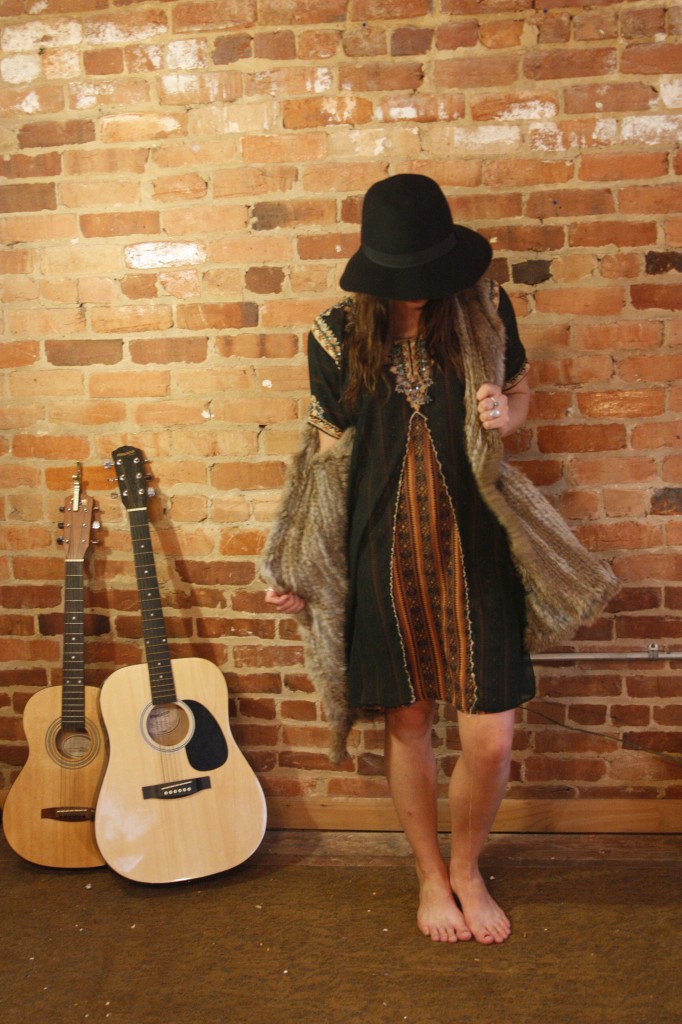 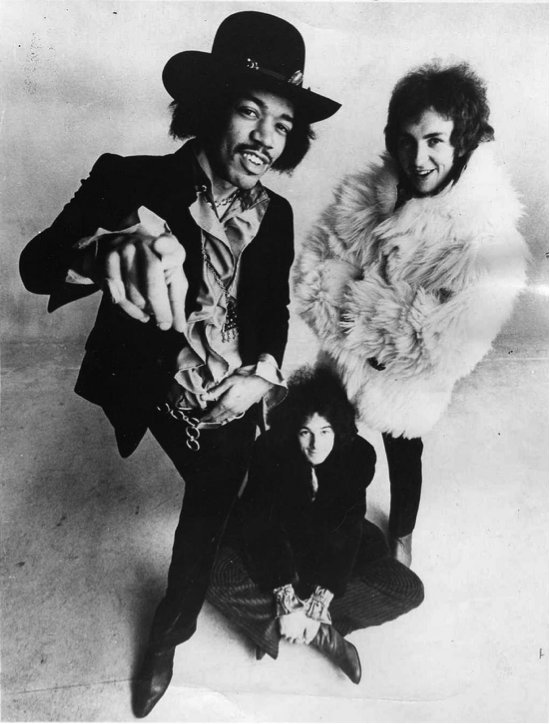 This next look was inspired by Hendrix’s passion for fur and hats. We layered a fur vest on top of a vintage dress (both found at Goodwill!) and topped it off with a black hat from American Threads. Bad hair day? Throw on a groovy hat and fix everything while looking totally cool. So simple. The shape of the hat is a bit more feminine and updated than the traditional top hat Jimi loved to wear, but it brings a bit of a contemporary feel to the outfit. Layering is imperative for the modern woman. You can wear as much or as little of it as you want based on the temperature or vibes of the day as it progresses. 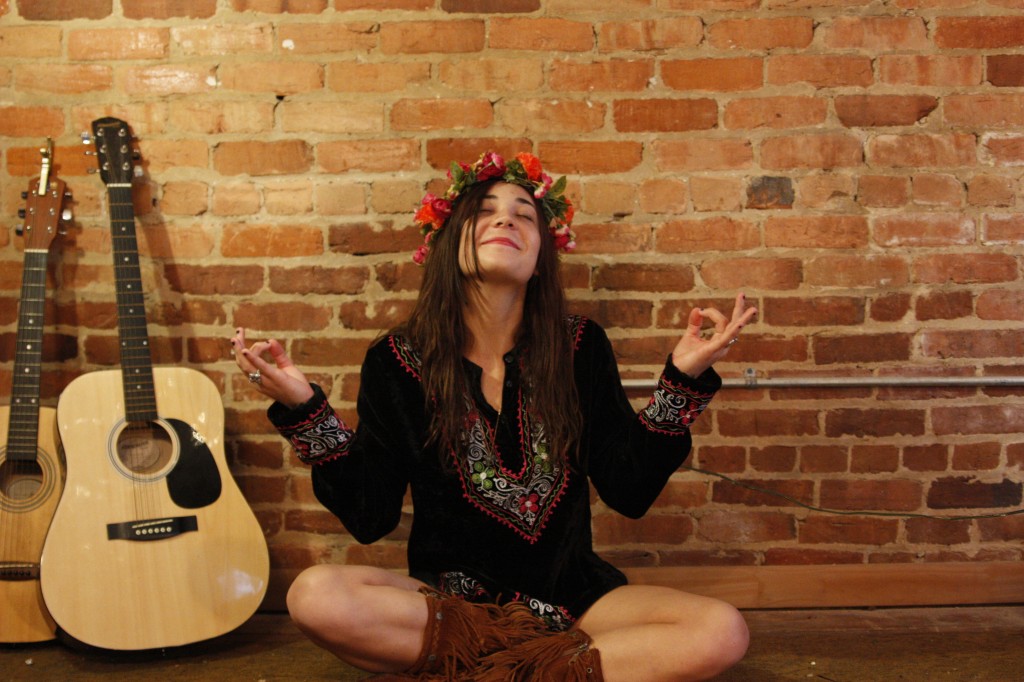 The top in this next outfit is a total original. Danielle found it at a shop during Hulaween Music Festival last fall. Luckily, we found some similar dresses and tops on StyleHive.com. The shirt paired with homemade jean cut-offs and Minnetonka moccasin boots is pulled together by the flower crown atop Ms. Jordan’s head… that she made herself. Head to Pinterest.com or Google to find tips on how to make one of your own. With the fringe, brightness and flower-child halo, Jimi would certainly have been proud. 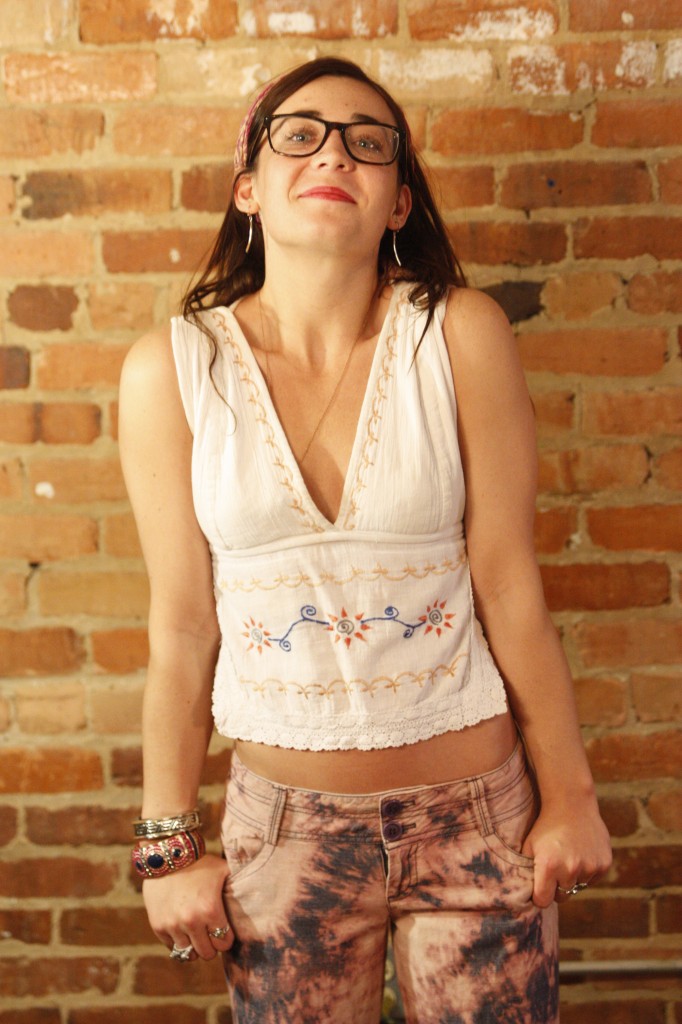 The last outfit we put together was one inspired by Hendrix’s use of earth tones and, of course, tie-dye. These bell bottom pants were another unique creation of Danielle’s. She started with white pants and tie-dyed them before bleaching the bottoms. However, if you don’t have the time or creative energy to tie-dye a pair of pants yourself, you’re in luck; we found a similar style on ThreadSence.com. The handmade bottoms went perfectly with the white linen, embroidered top. The shirt was my Mom’s from “back in the day” and of course, she has no idea how she came across it. However, a little searching on Etsy.com came back with a bunch of similar tops. We topped it off with a totally radical headband from American Threads and plenty of rings and bracelets. 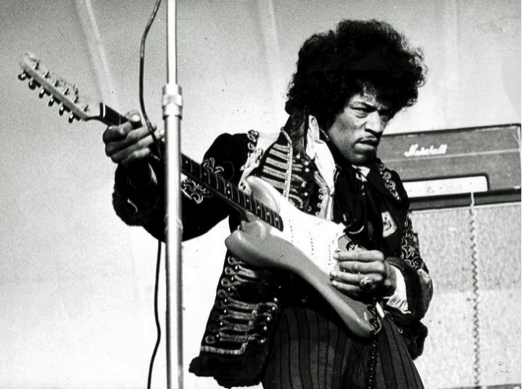 Hendrix’s love and talent for music made him a legend; his style made him an icon. Whether he was playing an extended psychedelic version of the “Star – Spangled Banner” or shredding on his Fender Stratocaster while it was behind his head, he was always decked out, head to toe, in bright colors, far out patterns, fur, fringe, and tie-dye. His style was completely original and, in the end, timeless. Inspired by his appearance and mixed with a bit of modern fashion sense, you can be a real “Foxy Lady.”