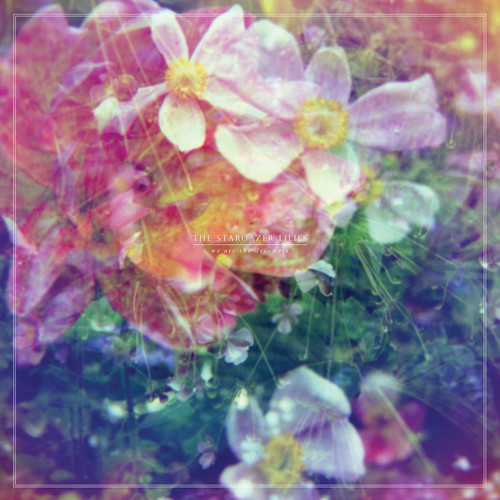 The Lilium ‘Stargazer’, or the Stargazer lily, is an oriental lily characterized by its vibrant pink color and very fragrant aroma. And as far as The Stargazer Lilies are concerned, it seems to be the musical equivalent of the poppies from the Wizard of Oz; once under their influence, you don’t feel like doing much of anything but laying staring at the sky, wafting gently along as if in a dream.

Previously of Soundpool, John Kep and Kim Field have left the faster tempo of their previous shoegaze tunes behind them while stripping and slowing down the sound to create The Stargazer Lilies, self-described as “butterfly wings, slowly beating guitars enveloping the listener, ethereal breathy female vocals floating on a melody, rocked out bossa nova beats and bad ass bass throwing down the rhythm.”

The We Are the Dreamers album cover is made up of lilies and leaves, with a misty, hazy gossamer filter. I spent a good amount of the time I was listening to the vinyl gazing at the cover itself. Inside is a similarly flowery page in bright pastels and organic hues overlaid with the whimsical and pensive song lyrics that make up the album. The record itself is a rich pastel-pink with the signature lilies in the center.

“We Are the Dreamers” starts the album off at a leisurely pace with an ambling melody and hypnotic vocals, singing “with stardust in our eyes, the clouds are at our feet, we are the dreamers, wide open are the skies.” The tune is soporific, as is the majority of the album, and feels like taking a trip to the land of the Elves in Middle Earth (hoping everyone gets my Lord of the Rings reference.)

“Del Rey Mar” continues the dream sequence of the album with a psychedelic, more acoustic number reminiscent of the 60s or Xanax daydream in a field of lilies.

The album doesn’t have much in the way of variety and is more like one long dream sequence than anything, with the exception of the slightly more upbeat “Light of Day,” which sees a slightly faster tempo and slightly heavier guitar.

Don’t make plans to be active while listening to “We Are the Dreamers;” you’ll more than likely end up laying on your couch thinking of some field somewhere in some hazy utopian forest clearing. It’s optimistic and introspective, and definitely soothing. Its angelic vibe rocks like a lullaby, gently soothing and warmly embracing the soul with some talented guitar work thrown in. Honestly, while it may not be the catchy music you get ready to on a Saturday night, it’s the perfect jam for a Sunday morning hangover.

“We Are the Dreamers” was released in late 2013 via Graveface Records, and you can catch it at your local vinyl store.