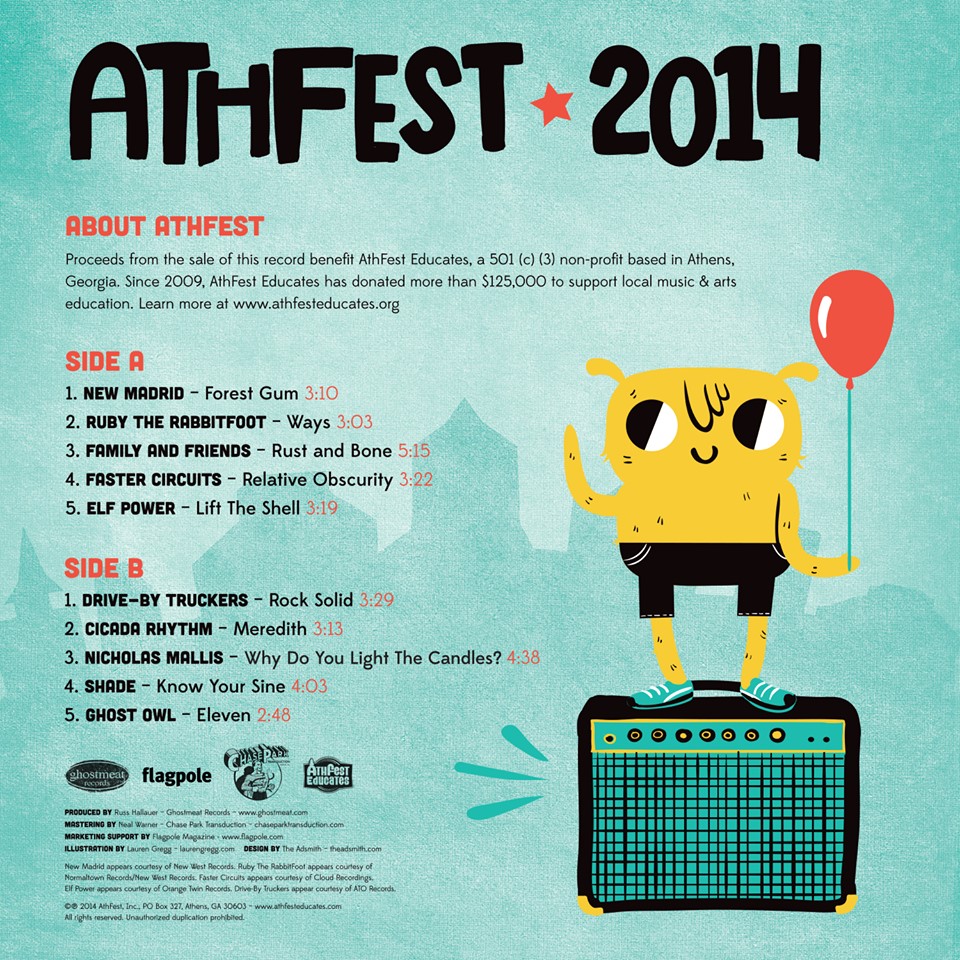 June is upon us, which means, Athens readers, that AthFest is right around the corner. AthFest Music and Arts Festival is like Christmas in June for the plethora of music lovers in the Classic City, a weekend of more music than you thought possible, with 14 venues and two outdoor stages hosting bands spanning every genre, most of them calling Athens home.

Every year for the festival, AthFest releases a compilation album produced by Ghostmeat Records (David Dondero, Drive-By Truckers), the proceeds of which go to benefit AthFest Educates, supporting art and music education in the Athens area. This year, however, the album will be released exclusively on vinyl—a first for the AthFest compilation.

I had a chance to grab a first listen, and saying I enjoyed it would be a vast understatement. Every year, AthFest reminds me how lucky I am to live in a city filled with such amazing art and music, and this compilation album is a testament to that.

Ruby the Rabbitfoot takes over next, with “Ways.” Unsurprisingly, this song is instantly catchy, as Ruby croons over the acoustic guitar, universally appealing, but maintaining the down-to-earth indie vibe that has made her an Athens favorite.

“Rust and Bone” by Family and Friends starts slow by way of acoustic guitars, a violin and some heavy drums, and then builds with incredibly intensity, exploding with such pensive lyrics as “wondering if there’s a better way to live or at least a better way to die.” The song picks you up, whirls you around and sets you back on your feet, reeling from the trip.

Faster Circuits is groovy and psychedelic and evokes a good amount head bobbing with their psych-pop jam, “Relative Obscurity.” Indie rockers Elf Power do the same with their tune “Life the Shell,” singing, “and no one’s ever home when you ring the bell, and nothing’s ever there when you lift the shell.”

Of course, the Drive-By Truckers make an appearance on the album, with their raw and mellow “Rock Solid” tune from their Record Store Day EP release, Dragon Pants. The boys do what they do best.

Somewhere between Amy Winehouse and Billie Holiday lie the enchanting and unique vocals of Andrea DeMarco, complemented by the clear voice of David Krislis on the folksy “Meredith” by Cicada Rhythm that redefines the folk sound.

Nicholas Mallis and his deep, booming voice ask, “why do you light the candles when the storm hasn’t happened yet?” on his moody track, “Why Do You Light the Candles?” while Shade remains as capricious as ever on “Know Your Sine” with a mix of rock, punk, noise-pop, and indie music that is uniquely their own.

Ghost Owl closes out the album with “Eleven.” Ghost Owl is three quarters of the disbanded Athens legend and AthFest veteran band, Perpetual Groove, and although I have heard the name many times, I hadn’t had the chance to sit down and listen to them. They are a complete departure from the organic jams of P Groove and sway towards the indie rock genre, heavier, with a greater tendency towards electronic sounds and effects and a much more epic sound that builds throughout the song.

The AthFest 2014 compilation album makes me proud, as always, to be an Athens resident, a member of a community so rich with new and unique sounds, constantly pushing the boundaries to create music that the rest of the world can only imitate. And as someone who has seen about half of these bands live, I can assure you the festival itself will be just as exhilarating as the album. One thing is for certain, you DO NOT want to miss out on buying this record, and especially attending the festival.