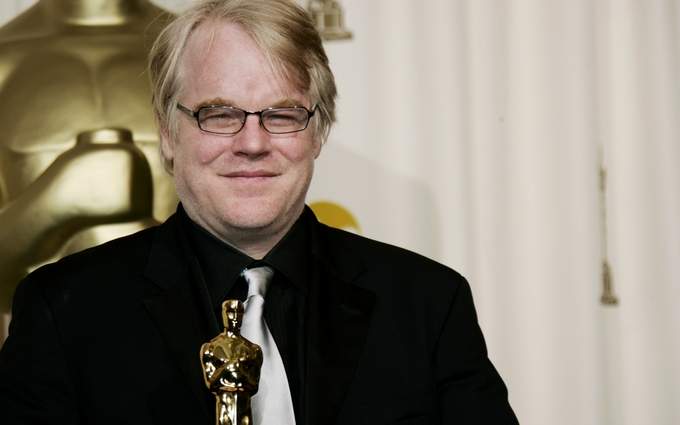 In a Sunday, March 5, 2006, file photo, actor Philip Seymour Hoffman poses with the Oscar he won for best actor for his work in “Capote” at the 78th Academy Awards, in Los Angeles. Philip Seymour Hoffman was found dead in his apartment on Sunday Feb. 2, 2014. He was 46 years old. (AP Photo/Kevork Djansezian, File).

“Not mine, sir” the Count replies, after being told that his work on the pirate radio ship is finished due to British laws. “I’m an American citizen, and I don’t give a hootenanny g*ddamn about your nitpicking limey laws. I intend to broadcast from this ship 24 hours a day until the day I die. And then for a couple days after that.”

Philip Seymour Hoffman, as the Count in Pirate Radio (released as The Boat That Rocked in the U.K.), electrified the screen, yelling into the microphone, refusing to stop broadcasting rock and roll to all of England even as everything from the British government to jagged rocks threatened to sink their vessel into the North Sea.

Pirate Radio was merely a movement in the symphony that was Hoffman’s acting career. Before the age of 40, he had won an Academy Award for his performance in Capote. From The Big Lebowski to Almost Famous to The Hunger Games, Hoffman never failed to invigorate the audience, completely morphing into each character he embodied, losing himself in the role. Consequently, the audience continuously lost themselves in him.

Born in Rochester, New York, in 1967, Hoffman’s love for acting found its roots as early as high school. He attended the Tisch School of the Arts at New York University to further nourish his passion, and after landing the role of Scotty J. in Boogie Nights, his career took flight. From that moment onward, he became a symbol of out-there movies, often playing quirky roles with vibrant characters and exuberant emotion.

Hoffman truly believed in the importance of his job and the solemnity with which he approached each character was the mark of a truly dedicated actor. As he told TIME’s Michael Krantz in a 1999 interview, “Actors are responsible to the people we play.” But Hoffman did not just “play” people; he completely transformed into them on both the stage and the silver screen.

As is often the price of fame and fortune, Hoffman struggled with a drug and alcohol addiction. Although he sought treatment multiple times, he relapsed in 2012 and was found dead in his Greenwich Village apartment on February 2, 2014, from an apparent drug overdose.

As an aspiring music writer myself, I will never forget the way Philip Seymour Hoffman portrayed Lester Bangs, legendary music critic, in Almost Famous. His brash, bold demeanor and cheeky, impertinent attitude lit up the screen as he gave advice to Will, a hopeful young music journalist. I guess in a way, I imagined him talking to me, advising me as he did Will, about rock stars and the lifestyle they lead. He called it the “industry of cool” and gave some of the best advice I have ever heard: “you have to make your reputation on being honest, and…unmerciful.” His words resonated with the journalist inside of me.

“Music, you know,” Hoffman says, playing Lester with vivid expression, “true music – not just rock n roll – it chooses you.” Gesturing wildly with every word as he speaks into a radio microphone, Hoffman continues, “It lives in your car, or alone listening to your headphones, you know, with the vast scenic bridges and angelic choirs in your brain. It’s a place apart from the vast, benign lap of America.”

The world lost a magnificent individual who possessed a remarkable ability to evoke from the people who watched his films every emotion from smirking laughter to woeful tears. In a world of fakes and temporary fads, his authenticity and timelessness will be greatly missed but not forgotten.