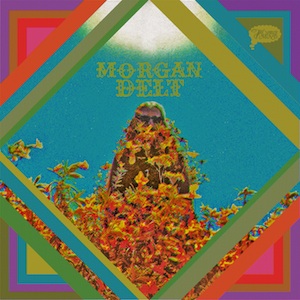 Drop everything, lie down, and immerse yourself in the swirling ambient tunes of Morgan Delt’s first full-length album, set to debut on Tuesday Jan. 28. The self-titled effort brings to mind the wispy vocals of Simon and Garfunkel, mixed with the psychedelic qualities of Tame Impala heard in slow motion, nothing short of pleasant.

The album, made available by Chicago Label Trouble In Mind, will contain five additional tracks to accompany those already on the EP, Psychic Death Hole, released last year in true hippy fashion: by cassette-tape only. Fortunately, the full-length effort will be released in a more accessible medium, available now to pre-order on iTunes or for vinyl pre-order via Trouble In Mind Records.

The album boasts a wide range of sounds that reverberate through the multiple layers of audio and trippy effects that have been cast in a beautifully complex way. The complexities become immediately apparent in “Make My Grey Brain Green,” the first track on the album that certainly does not beat around the bush to reveal Morgan Delt’s signature sound of rich psychedelic pop/rock.

Highly pitched guitar riffs slide right out of the speakers during the stand out track, “Barbarian Kings,” resembling a slow meandering river of sound.  A similar effect can be heard on “Obstacle Eyes,” almost reaching the same level as the pleasing rising and falling sensation of sound blossoming from the latter.

The pace picks up slightly with tracks “Beneath the Black and Purple” and “Chakra Sharks,” in which Delt ironically croons “I’m gonna ruin your meditation.”

Things begin to turn slightly eerie and melancholy during “Sad Sad Trip,” an aptly named deeper cut off the album. The eeriness lingers through “Backwards Bird Inc.,” characterized by an inaudible voice that echoes in and out of the foreground, building until finally crashing into a downward spiral of heavy guitar.

The echoes continue throughout “Tropicana,” as multiple voices are layered over each other in melodic fashion, complimentary to the ear. A ghostly sound that resembles an organ fades out onto a set of foot steps walking away, a brilliant finish to a carefully composed track.

“Main Title Sequence” rounds the album out quite nicely, returning to the wistfulness of the first tracks, suggesting repetitive listening as a compelling possibility.

Delt’s self-titled album does not easily lend itself to be played in the background. Despite its easy listening tracks of psychedelic rock/pop, it demands our attention from start to finish.

Morgan Delt comes out January 28th on Trouble in Mind. You can pre-order your copy here.