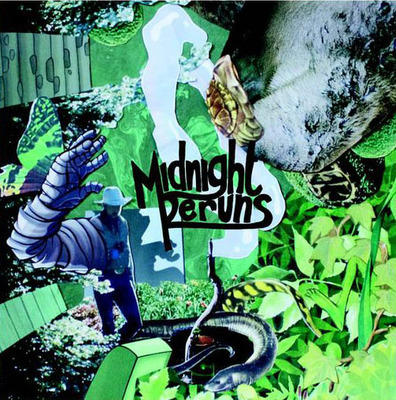 With a 90’s garage-band punk sound, Midnight Reruns opens with energy in “Going Nowhere”, in which Graham Hunt sings, “I’m here for you and no one else…I ain’t going nowhere without you.” It’s as if Hunt exclaims his longing and promise to his restored project from 2010. Singer, songwriter, guitarist, Graham Hunt retired his position as guitarist of Trapper Shoepp & The Shades to dedicate his time to Midnight Reruns (both are Milwaukee-based). With the contributions of Karl Giehl, Brady Murphy and Sam Reitman, Midnight Reruns has proven to be quite versatile and layered.

The band has an expansive capacity for layered sounds and moods. For example, in “T.V.Z” and “Basement Guy”, a piano sets the tempo that the rhythmic drums work well with. Likewise, in most songs, two guitars can be identified, both very strong and harmonic, to create a somber mood, as in Grand Slam, or a sprightly sound, as in “King of Pop”. Although most of Midnight Rerun is upbeat, there is no lack of soft sounds. In fact, some of the most upbeat songs on the album start slow, like “King of Pop” and “Stop Lyin’ Down”. “Interlude” is the best example of this dream-like, lullaby sound. One would definitely be mistake to consider Midnight Reruns a flat sound, instead they force you to rethink your judgments and listen more than once, as stated in “Pharmacy Eyes” when Hunt sings,  “Don’t look at me with those judging eyes, I can tell you’re sick of me.”

Moreover, Midnight Reruns brings about nostalgia, hence the name of the band, a message of replaying and feeling comfortable with past midnight mishaps.  Hunt sings of memories, misadventures, and future ambitions (or lack of). “Grand Slam” relates of heartbreak, loneliness and tears, while Hunt reminisces in “Summer Smoker”, “I go to a place where I can smoke or get high…can we all just go back to that day in July”. The album ends with “Basement Guy”, which seems to be a reply to the monotonous and vague question, “Where do you see yourself in five years?” Apparently, “scarfing down on Cheetos”, being complacent, and never leaving the basement. Midnight Reruns is Dazed and Confused.  It is high school. It is regret. It is contentment. And it is available November 12th.

FOR FANS OF: Superdrag, The Replacements, Weezer, Mean Jeans