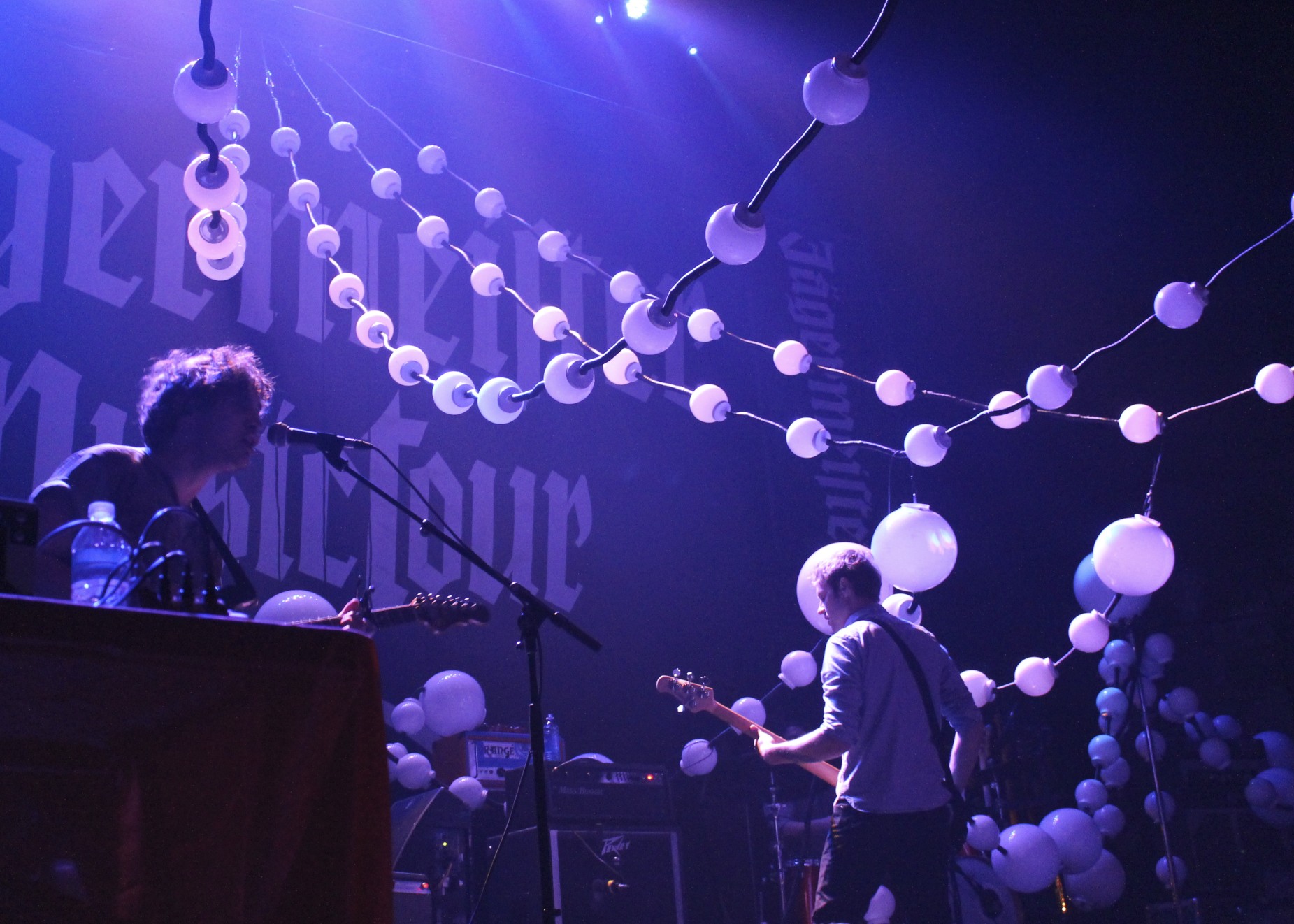 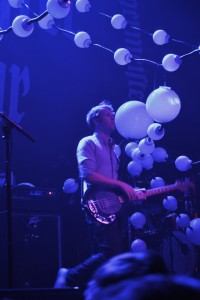 The Lonely Forest is a lovely indie rock band based from Anacortes, Washington (I swear, some of the best bands come from Washington, don’t they?) that is relatively new to the music scene.  I attended a show at the Georgia Theatre in Athens where they headlined for Portugal. The Man on the Jagermeister Music Tour.  The stage had strands of white, unlit, round lights (later to be revealed as an amazing and colorful light show from Portugal), and the stage was set a calm blue. Everyone was itching with anticipation; the crowd was growing. Being up front to take photos was so personal as the guys finally came out and everyone cheered.
They put on a great show, and I vividly remember a guy that shouted out a song request for “We Sing In Time” and John, the lead singer, taken aback, saying, “Wow, someone actually knows our stuff- that’s awesome!” My favorite songs- and the ones that were most profound- were “Woe Is Me… I Am Ruined” and the requested song “We Sing In Time”.  They got down like no one’s business, and it was definitely awesome to watch them get so into the song and play from the heart… and as cheesy as that may sound, I’m being serious!
Arrows dropped on March 22 and was produced by Death Cab for Cutie’s Chris Walla on his label called Trans Records. I’ve given “Arrows” a thorough listen, and I must say, if you don’t have it, you NEED it- like, Turn-Off-This-Song-And-Go-Out-and-buy-the-album need it. It’s a great sunny day, sunny summer album.
They have promised to return to this fabulous little town of Athens, saying they enjoyed themselves and the crowd’s enthusiasm. But to hold you over, here’s a little interview I was able to have with frontman John Van Deusen.

JF: What do you love about music?

JVD: I enjoy connecting with the people through music and relating to them. My sisters were involved with classical music, and I was “forced” to listen to it. I grew up with whatever was playing.  At age 11, I was interested in drums, piano and guitar, and around age 14 I stared playing with others. During 6-8th grade, I played with my dad a lot.

JF: Was this something you’ve always wanted to do? How did you get signed to Chris Walla’s label?

JVD: It was a childhood dream. I’ve always liked rock, and I wasn’t sure how realistic it was to play music, but I always wanted to do it. It felt right. I was good at it, I guess. I definitely dreamed of this since I was young. It’s fun; it’s a good job. You’ve just got to find the right people and be at the right place at the right time to get signed. I’m a huge fan of Death Cab, and got backstage. I jokingly asked if he’d produce it, and he said yes. There are a lot of terrible bands out there that are popular and get signed just because they are easy to digest. You have to work hard; it’s chance and hard work. You’ve got to know what you’re doing.

JF: What is the writing process like? Specifically Arrows– is there a theme?

JVD: I’ll write out some stuff on an acoustic guitar or piano, like the chorus, then I bring it back to the band, and they write their parts and it got easier. No theme, just a group of songs. The writing process is fast. I wrote quickly, finished them, and the band expanded them. Chris helped with production.

JF: What’s the audience’s feedback like? I know at the show a guy requested a song and you seemed surprised. Is the response not usually this big?

JVD: I didn’t expect that reaction in Athens, because we don’t have one really big song.  National feedback is much more laidback.  It’s quite unlike other crowds. They usually come to hang out and drink and see shows so they can be kind of quiet. We are used to quiet shows; it’s part of growing as a band, but we also had numerous shows where the crowds were awesome.

JF: How was it collaborating with NOW, NOW for the Record Store Day? How did that come to be/ have you played with them?

JVD: NOW, NOW is another band that Chris is working with. They used any two bands from Trans Records, and it’s got an alternate version of our song “Woe Is Me… I Am Ruined”. We’ve never played live with them, though.

JF: How did the Go Outside Guitar Lesson Video Contest on YouTube happen?

JVD: (laughs) People submitted covers, and we didn’t know it was a contest. It’s the marketing team’s idea; we had no idea it was happening. I made an instructional video to anyone interested in learning how to play it.

JF: What’s in store for The Lonely Forest?

JVD: After the tour, we are going home. It’s all been very tiring! We’ve been selling records and playing for a lot of people and been having a blast. We’ve been doing everything ourselves. I know I will have fond memories of this time in my life.

3 thoughts on “Exclusive interview with The Lonely Forest!”