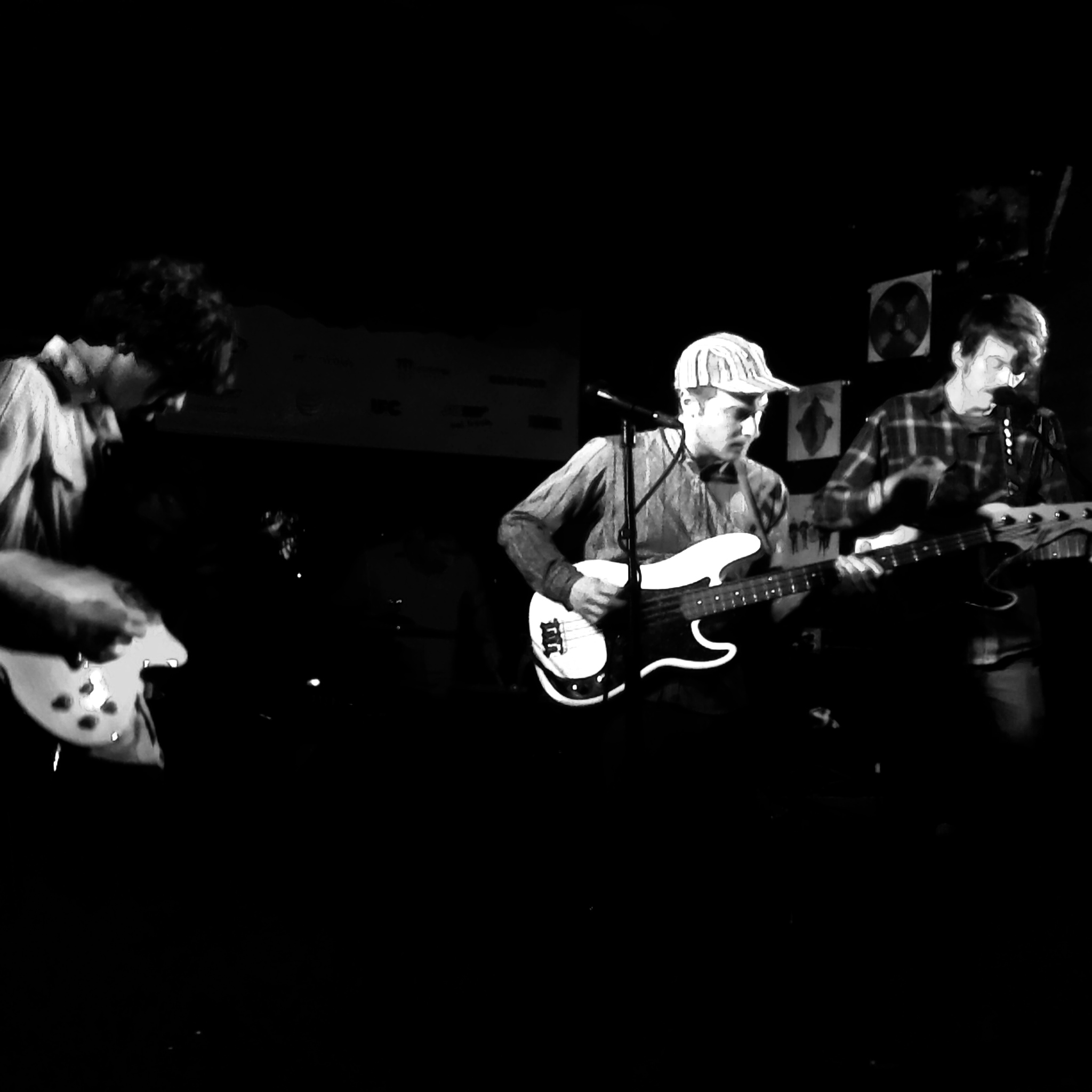 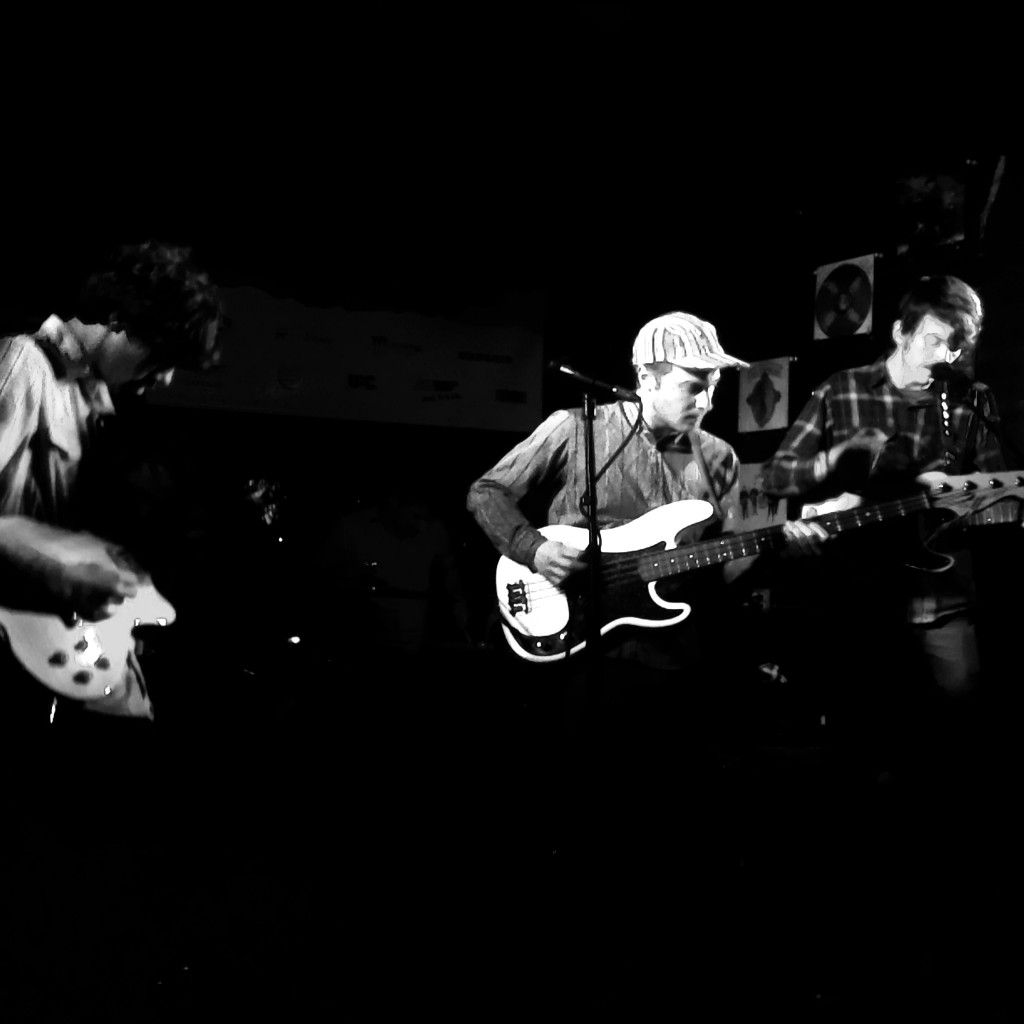 As a seasoned SXSW attendee (two consecutive years constitutes as seasoned, right?), I’ve come to realize that – while not many – there are a few things you are guaranteed take with you from your experience.

You will, without a doubt, always leave with a full backpack-worth of “swag”- koozies, stickers, matches, sunglasses, t-shirts, CDs or whatever else was shoved in your hand as you were cramming a taco into your face while power-walking through the masses to get to Red 7 by five minutes ago.

While those things are all good, great and dandy, the last thing you are guaranteed to take away is probably most relative to what brought you to this week of SXSW in the first place – you came for the music, and without a doubt, you left with at least one new band that really, really did it for you.

For me this year, that band was SW/MM/ING.  SW/MM/NG is a five-piece from Arkansas that makes whimsically dreamy tunes that put you somewhere between the California coast and the year 2004 in your mind. Following their showcase at Valhalla, we were able to catch up with some of the guys and find out completely relevant things like where they were eating and potential lawsuits they were witness to. Read for yourself, and then download their demo “Feel Not Bad” (if you’re into things like ear candy and good feels).

Vinyl Mag: Tonight was your first showcase, correct? How do you feel it went?

Jared Hennessey: Yeah, it was our first showcase and first show with Jack on pianos. It went pretty well, I think.

Jack Paul: Well, I’ve been with the band playing drums, but I’ve assumed a new position, because we got a better drummer.

VM: Right on! What has been memorable for you thus far [during SXSW]?

Brian Kuppillas: The Portals showcase was really cool, though. And actually, a great set we caught was Trash Talk, and it was right outside of Beer Land. It was nuts- the cops were called; people were jumping off of the roof and falling out of trees. There was a huge mosh pit in the center of the street, and the cops rode up on their ATV’s with their sirens on during a song, and it just made the song so much cooler. Other than that, we’ve just been partying with buddies.

VM: I noticed you had a substantial amount of people at your showcase tonight who knew you guys- were those real- life friends or fans?

JP: A lot of people move away from Fayetteville, and Austin is pretty close, so they come here. We have friends all over, so they come to support.

JH: We actually have no fans – just a lot of friends.

BK: Arkansas is a good place for leaving, so they all head to bigger cities.

VM: I noticed when trying to google the band that you’re actually very hard to google- is that an intentional thing?

JH: No, we’re working on it. We’re thinking about it pretty hard right now.

BK: Can we talk about the story behind it?

VM: I would love to talk about the story behind it.

BK: So, there’s this UK band called Swimming, and they called Jared up one day around 8 a.m. while we were in Virginia Beach on our first or second tour. They went on with some ‘manager of the band Swimming’ stuff, and I was like, ‘No, we don’t need a manager, but thanks for the call’ or whatever. Meanwhile, he had this ridiculous accent, so I had no idea of half of the stuff he was trying to say. It pretty much came around to him stating that he was calling because he might sue us if we didn’t change the name.

VM: So, this is how the slashes in the band name came about?

JH: Yeah, that’s how that started. But there’s also this band in Australia with the name Swimming, so we may as well just call ourselves Swimming.

JP: Their main concern was that it would be too hard to tell apart in iTunes, so now we just write it differently.

VM: Well, I guess this segways nicely into another question of mine- I saw that you [were on] a list of ‘Worst Band Names of SXSW’- how do you feel about that?

JH: Well, there’s a good point to that that a friend of mine mentioned- you can literally take any of the ‘best band names’ and put them on the ‘worst band names,’ and it all still works. They’re all easily interchangeable.

BK: For example, I think Perfect Pussy is a fine band name. But as far as how I feel about it, I love that we made that list.

VM: To be honest, the name is what drew us in to check you guys out, so I guess it’s all relative.

BK: Well, that’s awesome. It could always be worse- like, The Goo Goo Dolls or something.

JP: Can we be all of those people? Because we’ve already done both of those today.

VM: What exactly have you done today?

BK: The Bearded Lady and Austin Daily Press. They’re both dope places to eat, so check them out. They literally have the best hush puppies, and I hate hush puppies.

VM: Where were you when the accident happened in front of the Mohawk?

JH: Still in Fayetteville, actually. We didn’t even hear about until we were driving down here. It was really weird pulling up here and knowing we’re right beside where it all went down.

JP: I was texting my girlfriend on the way down here about how I was worried about the energy we would be coming into, but the vibes have been really good, all things considered.

VM: What’s currently playing in your tour bus at the moment?

BK: We’re all obsessed with the solo record from Kevin Morby, who is the guitarist in Woods.

JH: I’ve listened to it four times in the same day, and I never do that with any record. I’m obsessed with it- you let him know that.

BK: Our drummer is obsessed with The Zombies, so we listened to a lot of that, also.

BK: I’ll never understand it, but there was this dude who said we sounded like Hootie and the Blowfish. I’ve also gotten the guy from Dashboard Confessional, and I don’t hear that one, either.

JP: My girlfriend always says The Cure, and we’re all totally down with that.

VM: In that same token, what’s the weirdest thing anyone has said to you about their thoughts on your music?

BK: So, this dude named Buffalo once told us that our music took him to the spirit realm, but he was tripping really hard, so I’m not sure how much of that was musically-induced or drug-induced.

VM: Do you ever have those moments where you get those vibes off of your own music?

BK: There are times when you think about something too much that it doesn’t seem real anymore. You can do it with a word, even. If you say ‘orange’ over and over again it becomes meaningless; it’s easy to feel that way when you’ve played something hundreds of times. But, there are those times when you realize that you’re essentially five strangers, and everything worked out so well that you ended up together, and now you’re all playing the same song, and you’re very much in tune with one another. That’s what usually pops in my head and throws me out of it for a second.

JP: Because I live in Little Rock and not Fayetteville, I come to things a little bit later, so I have more of that outside perspective where I listen to the music and can really appreciate what’s being made.