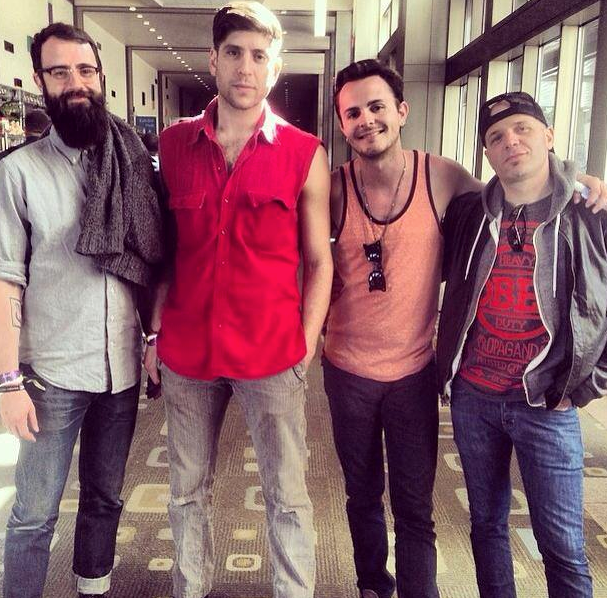 There are many factors that go into scheduling interviews during the chaotic week that is South by Southwest; luckily, the scheduling aspect is completely taken care of by the brains behind this whole operation, Emily McBride.

Upon receiving my schedule and reviewing it thoroughly, my interview with Spirit Animal stuck out for a few different reasons, one of them being that the location was listed as “The Shred Shed” – fast forward to mass confusion and a hefty realization that the “Shred Shed” was an exhibit at the Austin Convention Center that didn’t really even exist until the following day. After sorting out the details with lead singer Steve Cooper, we settled on a completely appropriate and professional meeting point – let’s meet up at the condiment table, somewhere between Exhibit Hall 1 and 3…

Besides the appeal of its location, this interview also stood out to me because of the band itself.  Upon first listen, all of us at Vinyl Mag instantly knew that this is a band to look out for (and not just because Steve Cooper’s voice makes me think of Anthony Kiedis sometimes…is anyone else getting that? Especially on “I’m Around”…).

The guys of Spirit Animal have been known for their on-stage energy, and upon meeting with them, their off-stage energy does them just as much credit. In between their many performances, we snagged a few precious moments with Spirit Animal to ask them about their latest hit, “The Black Jack White,” Beyoncé and their summer plans.

VM: Is this your first experience at SXSW?

VM: Your hit song “The Black Jack White” has begun to take off- are you actual fans of the White Stripes?

Paul Michel [bass]: I mean, yeah, we’re fans. We’re not like crazy about them or anything. It just fit as an appropriate title.

VM: What is the writing process like? Does the music or lyrics come first?

SC: We don’t have a solid method down, but usually the music comes first. We work together to form something, and however it comes about is how it comes.

VM: A big thing for music this year – and always – is Beyoncé. Are you a fan of the new album?

SC: I mean, I woke up like this! No, but really, we’re huge fans. That new album is sexy and awesome.

VM: How do you feel that MTV’s Buzzworthy has helped in getting your name out?

PM: It’s been really awesome to have them airing our music video, and of course just reaching all kinds of audiences that we wouldn’t necessarily have reached otherwise. We were really excited to have them air our video.

VM: What showcases have you wanted to catch while at SXSW?

SC: Young the Giant, for sure. Also not only do we get to see Parade of Lights, but we get to play our showcase with them. That’s really awesome and exciting for us, because we love them. But like – Young the Giant.

PM: We took it pretty serious this year and made actual spreadsheets of who we wanted to see while we were down here; you can’t mess around when it comes to SXSW.

VM: What’s next for Spirit Animal once South By comes to an end?

COOPER: We have a song we plan to release in May and will probably go on tour for a bit. We have a whole archive of new songs we’re excited to put out, but we’re planning on playing our cards right and just seeing what’s best for us.

*You KNOW you wanna see these dudes live. But seriously. You do.