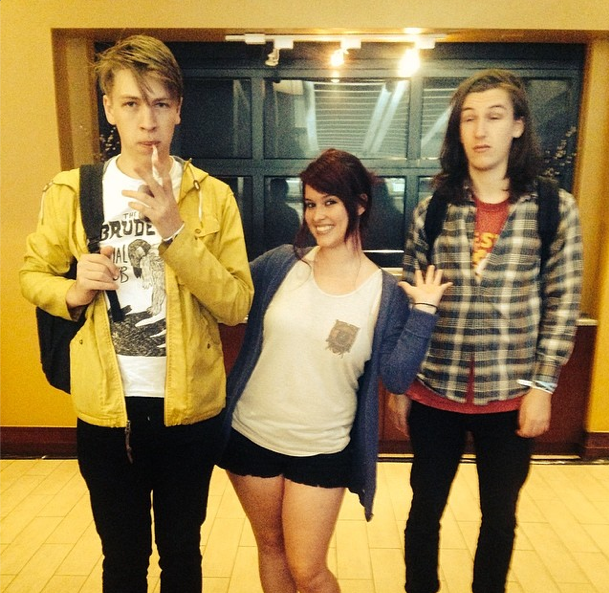 Drenge, a post-grunge brotherly duo from England, sat down with us during the week of SXSW to talk about things like music, American culture, and their obsession with Game of Thrones (that’s the second one this year— we can’t stop talking about it!). If you’ve ever held conversations with a couple of English lads, you understand where I’m coming from when I say there’s nothing more endearing than an authentic English accent. Check out what the guys had to say to Vinyl Mag below (and try to read it in proper English vernacular if you’re feeling really wild)

Vinyl Mag: When did you guys get into town? Have you played any shows yet?

Eoin Loveless: We got in late last night and played a show this morning at Red 7.

VM: Have you played South by Southwest before, or is this your first year?

EL: No, this is our first time.

VM: So, what are you excited for or hoping to take from this week?

EL: Well, the main reason we’re in town is to go to the Game of Thrones exhibition – really excited about that. All we really want is to find a way to be asked to do a song for the fifth series of Game of Thrones.

VM: Are there any completely American/Texan things you want to try or do while you’re in Austin?

EL: Well, I’m pretty into root beer right now, which seems to be American. We would like to have a proper barbecue, as well, but I’ve actually heard that Kansas is the place for that. Granted, I heard that while in California, and I had one of the worst burritos I’ve ever had there, so I’m not sure how much I can trust that statement. Also, I’ll be watching True Detective tonight, which seems pretty Texan.

VM: How old are you guys? Are you old enough drink or what?

VM: How old were you when you started taking your music seriously?

Rory Loveless: I don’t know if that’s happened yet. Maybe one day.  It would be nice to take it seriously.

VM: Do you feel like being not only a two-piece, but brothers as well, is an advantage or disadvantage?

RL: I don’t think it’s one way or the other, honestly. Maybe when we do start taking it seriously, we’ll get stand-in’s, or something.

VM: How much of a culture shock is it to play in the States versus playing in the UK?

EL: It’s fine. We’ve grown up on a lot of American culture with movies and television and whatnot, so it just feels like instead of it happening in a small box in front of us, it’s happening in real life.

VM: Were you excited to find out the lineup that you will be accompanying for the Reading and Leeds festival? There appear to be a good bit of acts playing that are actually playing SXSW this year as well.

RL: We played the festival last year on a smaller stage, but it was raining while we were playing, so everyone just came into the tent; there were about 4,000 people and two circle pits going, so it was a pretty intense show. People seem to really take to our music there.

VM: How much of an influence do you feel that Tom Watson was in the notoriety of Drenge?

EL: He kind of just introduced our music to a lot of people who didn’t really care, like political writers of national newspapers and whatnot. It does come up in every interview, so we do have that to thank him for. I don’t think him mentioning us boosted album sales or made people want to buy tickets to our shows, but in terms of the media, he did kind of put us in the spotlight.

VM: After this week, what’s going on for Drenge?

EL: Just a bunch of recording and writing and touring; nothing too different than normal.