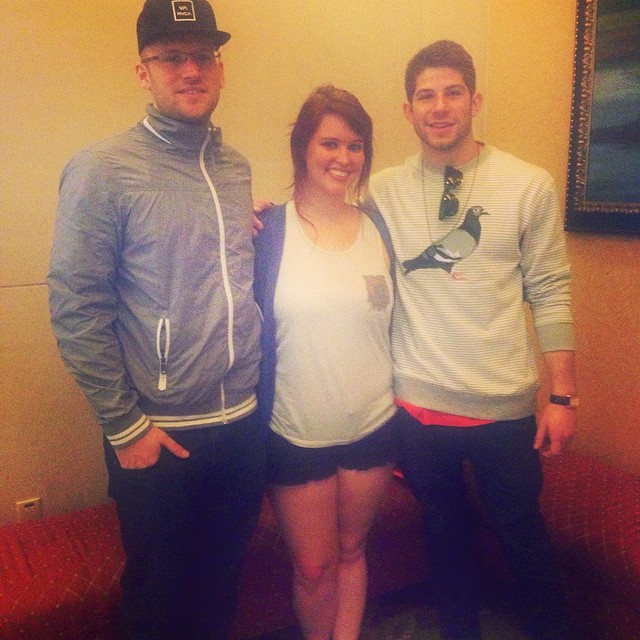 New-age hip hop duo, Aer, is comprised of Boston natives Carter Schultz and David Von Mering. Having just released their sophomore album earlier in March, the evolution in their style over the years is not only prevalent, but pioneer-style impressive. During SXSW, and (literally) hours into their arrival in Austin, we sat down with the two to pick their brains and find out what’s going on in their world. Give it a read, and follow that up with giving them a listen (I recommend “Feel I Bring,” but note that it’s been in stuck in my head for weeks now, and that’s a commitment in itself).

VM: It appears March and SXSW are the beginnings of an extensive tour for you two- what is the ratio of time spent on the road as opposed to off?

Carter Schultz: I’d say about 65 percent  on the road and 35 percent off. It’s definitely what I prefer; I get stir crazy when I’m home in Boston.

VM: Are there any artist comparisons that you frequently get that you’re over hearing about?

CS: Anything “Frat Rap” – get out of here with that. I hope you didn’t have all of these bands you had compared our sound too…

VM: Well, I did have one in mind, but I wouldn’t consider Gym Class Heroes “Frat Rap.”

CS: Oh, no, I’ll take Gym Class Heroes any day. I just hate being put into that pool of college rap, or anyone who is just doing it really “normal.” If you really listen to our music, it’s clear how different it is than that, but I honestly think the real comparison solely comes from our age. We are of the typical college kid age, but that’s as far as it actually goes.

VM: What are you most excited to see and/or do, being that this is your first year at SXSW?

CS: I want to go to Iron Works; I want to see The Felice Brothers, and I’m really excited to be playing the same showcase as Dom Kennedy and Casey Veggies.

VM: Do you feel like you’ve had a breakthrough moment into the industry yet?

CS: I feel like we’re not even close. We’ve had our moments where we’ve had sold out shows where it felt a little surreal, but I wouldn’t say there’s been a “break.”

DVM: It’s funny, because I feel like five years ago the big “break” was just signing a deal, and now deals aren’t really prominent or even normal. I wouldn’t say we’ve had a break, but the “Feel I Bring” video did a lot for us.

VM: Currently, what are your favorite releases of 2014?

CS: I’ve been bumping Satellite Flight (The Journey to Mother Moon) by Kid Cudi a whole lot lately, and obviously the new Arctic Monkeys has been on replay non-stop since it came out.

VM: Are you two hands-on with your own social media accounts, or does anyone handle that for you?

DVM: Our manager usually does boring, dry announcements, but other than that it’s one of us.

CS: I think it’s so important to give that personal interaction. It takes tweeting, “Haha thanks” or a little smiley face, but that means so much to the fans. I’d say that we owe most of our success to the tools on the internet.

DVM: I’m not totally satisfied with my Twitter, personally, but I’ll get there. The thing with that is you can tweet one thing, and it gets totally misconstrued into something else. I do love Instagram, though, and all the photos from artists that I follow- I like that sh*t.

VM: Have you ridden in a pedicab yet?

CS: A bike cab? I have not, but our hotel is like seven miles away, so maybe they can take us that far. It’d probably take like eight hours or something insane like that. I did see this beautiful girl today who was a pedicab driver, and she had these leopard pants on- I may have to find her later.

VM: Do you both participate in songwriting, or is one of you more prevalent than the other in that aspect?

CS: David is the one who is most prevalent, because he produces all of the music that you hear. But in terms of songwriting, we each collectively come up with a concept, and I’ll write my verses to the concept, and David will write his hook to the concept. So I’d say we each have our respective duties, but David takes on the bulk of it.

DVM: Our songs usually start with instrumentation, so I usually try to let that dictate where I personally go with it. Also, if I have an idea but Carter doesn’t like it, we scrap it or vice versa. But definitely instruments come first and play the most part.

CS: Over the summer, we are touring the UK, and later in the summer we’re going on another tour that’s still in the works. In the fall, expect videos, more music, and just more.

DVM: This is just the beginning, kind of like one of those sitcoms like Seinfeld or Friends; there’s still a lot more to come from us.