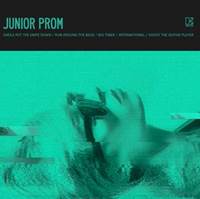 After making waves last fall at CMJ, just fresh off of tour supporting Panic at the Disco, an EP released a couple of weeks ago (Feb. 4), working on their full length, and preparing for SXSW, Mark Solomich and Erik Ratensperger are two very busy individuals. Mark and Erik formed the Brooklyn-based music duo Junior Prom after grinding in bands, rehearsal spaces, and venue halls across the city. Their single “Sheila Put the Knife Down” and the 2013-2014 ESPN College Basketball anthem “International” are both included on their debut Junior Prom EP.

With so much going on, we’re grateful these two took time out of their busy schedule to talk about their EP, the Panic at the Disco tour, and their enjoyment of pop music- no guilty pleasures here!

Check out the interview below, right after you check out their newest video for “Sheila Put the Knife Down” here!

Vinyl Mag: I’d love to start off and hear about your creative process for this EP.

Mark Solomich: In essence when we started, it was about a year of writing and playing together before we ever played a show, before we played for anybody really. So it took us a long time, trying different things and experimenting. Over the course of that time we made a whole album and scratched it, and then we made this EP. We made this EP after having written and recorded almost thirty songs. It really was a process of trial and error until we finally came across a sound we liked. We were trying to do something new, but really it was a matter of playing in rehearsal space, taking it home and trying different things on the computer, and really experimenting with the sounds; trying to make the guitars not sound as hard and some vocals not sound like vocals. It was a lot of fun and it was free because at the time we did not have a label yet, and we hadn’t booked a show yet.

Erik Ratensperger: And on top of that it was just us instead of a traditional band. It was just the two of us  working on this and trying to figure it out. We both come from bands, we’ve played in bands all our lives, and we’ve arrived at this point where we decided to take things in this direction and this presented new challenges for us on both the live and the production end.

VM: “Sheila Put The Knife Down” and “International” are getting a lot of recognition, I’m a big fan of “Run Around The Back,” I think it’s a great song- Do you guys have any tracks you are particularly proud of or tracks that are your favorites?

MS: When you play songs live, you feel like “I know this one really brings out people.” So that kind of makes you enjoy that song more, but I think like the song “Big Timer” people really react to that song because it’s neat and just the vibe of it. And that wasn’t my favorite track before we started playing out live, but it might be now, but it really changes day to day.

ER:  I feel the same way, it does change from day to day. Like Mark said, I don’t really think we expected “Big Timer” to be a stand out live song, but we noticed over just playing it live that people are reacting to that one. It’s a song you can just bounce around to. I think “Run Around The Back” is also a really natural jam. I think it’s hard choosing a favorite. I feel like I look at the EP as a whole as representation and a culmination of what we have been up to for the past two years; just laboring over these songs and now we’re to the point where we can kind of see how other people are responding, and that’s exciting.

VM: Do you think the city and Brooklyn have an influence on the music you are producing?

MS: Yeah, it does. Maybe not in an overt way where we’re trying to write songs that appeal to people in New York only. I think [being in the city] it can help with the multiculturalism and just what you hear when you walk into a bodega or hear what someone is pumping on their stereo on the street; you’re going to hear different things. So I think it definitely has influence, subconsciously more than overtly.

ER: I think that holds true for any environment or any city that you are in; it has an effect on what your music is, whether instrumentally or lyrically. As Mark said, I think being in a crazy multicultural city, that would definitely have an influence on sound. You know the stigma that comes with being a Brooklyn based band and I don’t think we ever deliberately set out to be positioned like that type of band.

VM: Who would you say are some of your biggest musical influences, who did you grow up listening to, and what are you listening to now?

MS: I think we have a common thread on what we grew up on. We definitely come from rock and we like punk music and played in punk bands as kids. That’s the bedrock of it. Really, ultimately it is the great songwriters, like The Beatles; we love great songwriting. As far as nowadays, I really don’t even listen to rock anymore, I pretty much listen to reggae, like Bobby Womack and Freddie McGregor, and a lot of funk.

ER: I’m on the same kick. I think that’s one of the reasons why Junior Prom works because of our creative collaboration. I think Mark and I listen to a lot of similar music and that streamlines the flow of our songwriting. And I’m sure we’re both familiar with every song on pop radio and what is very popular right now – and I enjoy it too. I don’t believe in guilty pleasures and I’m enjoying pop music. I think it’s a really interesting time to be an artist when there are people topping the charts who aren’t cookie cutter.

VM: I’d love to hear how touring with Panic at the Disco manifested.

MS: It’s a little bit of a murky thing, but from what I believe their management put us up for it, so it worked out well.

ER: I know their management is in New York and they might have seen us a couple of times. We got emails from our booking agent saying “Do you want to go on tour with Panic at the Disco…” Obviously, yes. We had not idea what to expect and we knew it would be big shows, but we didn’t realize that every night playing in front of 2,500 people would turn into just meeting an overwhelming amount of people who were there just for the music and who genuinely just wanted to enjoy themselves, see live music, and have no judgement or anything. Their crowd and their fan base is incredible and we were very lucky to play for them.

VM: You guys have definitely made a splash playing on tour with Panic at the Disco and you were a hit last fall at CMJ, do you guys have any plans for SXSW this year?

MS: We’ll be there but we just don’t know our schedule yet. We’ll definitely be playing some shows down there. We’re excited and we love Austin. We were just there a week ago and it’s hard to leave every time.

VM: What can we expect from Junior Prom in the next year or so?

MS: Definitely expect more show dates and we’re working on our full length right now. We don’t know exactly when it will come out, but we’re hoping the full length will be out by the end of the year, and of course more touring surrounding that. More online- we’re always trying to get stuff out for people to get into online, but the main focus right now for us is to do more touring and to wrap up this full length that we’ve been working on.