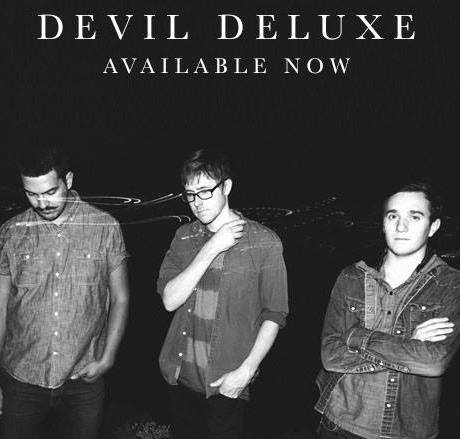 Leighton Antelman of Arizona-based band Lydia is arguably one the most talented (and ridiculously good looking) singer/songwriter/musicians in the indie scene right now. Lydia was formed in 2003, and has since created musical masterpieces like nobody’s business. Lydia released their latest album, Devil, back in March of 2013 with great fan response. Devil Deluxe (B-side edition) was released mid-October while the band was on tour with The Maine and Anberlin. We got to catch up with Leighton at their show in Jacksonville during their last week of the tour. If you’re now thinking to yourself, “I wonder if he’s just as friendly and amazing as I’d imagine him being”, quell your curiosity and take my word for it- he is. If, like us, you’re interested in what exactly Leighton had to say about the past, present, and future of Lydia, check the interview below to find out, and then head over to iTunes and download Devil Deluxe (neither of which will leave you disappointed).

VM: How is the tour going so far? Tonight marks a new ‘leg’ of the tour, correct?

LA: We just finished the last show with The Maine and Anberlin last night in Orlando, and now we’re just playing and headlining 5 more shows on our way back home. It’s not really a tour; it’s kind of just fall headlining shows.

VM: Is there anyone that makes this tour more special than the last (aside from a stop in Jacksonville this time)?

LA:  Haha, yeah that’s true. I mean, this is the first show, so I can’t really say anything special about it…..so far. Maybe tonight it will be super special. We’ve been playing 30 minute sets for the past month and a few days, so we get to play new songs finally, which is cool. We usually play the same set, but we get to play 6 or 7 more songs now.

VM: Let’s take it back a bit- what happened in between the decision to do the Farewell Tour and the release of ‘Paint It Golden’?

LA: The guy who started the band and I had started parting ways, and that was the reason that we did the Farewell Tour. About a week before we left for the tour, he just…disappeared. We didn’t know what happened to him. Our relationship was the only reason I wanted to stop the band. We still did the Farewell Tour, and I had planned to hold to my word about stopping Lydia, but about 6-8 months after the Farewell tour, [the band] convinced me that we really should keep playing music. I really enjoy playing music with those guys and I didn’t really ever want to stop, it was kind of just a one-person thing. After all of that was gone, we all still wanted to play music together. It was kind of just a sketchy thing that happened, and I wish it had never had to happen, but it is what it is.

VM: Will any of the songs off of the very first demo ever surface again, or are those just dead songs?

VM: Oh you know, the ones literally titled “Demo One” and “Demo Two” that were really terrific…

LA: Haha, nah, those were just…demos.  I don’t know how they made it on the internet.

VM: Well, they’re terrific and I’m glad they found their way on the internet.

LA: Come on, they weren’t terrific. Some of the parts were cool. They never were meant to make it on the internet, but they did and I guess they’re there forever.

LA: Lately in the van we’ve been jamming a whole lot of country mixes.

VM: Is it because you’re in the south and you feel like you should?

LA: No, no, the whole tour! It’s just been a thing that we’ve all been into on this tour; kind of along the lines of Top 40 country. I can’t really do the honky-tonk stuff, though.

VM: Is the band still in contact with Mindy White? Has the set list decision process seem to have been affected since her absence?

LA: I’m absolutely in contact with Mindy- we talk on the reg. And I guess it affects it a little bit; some of the songs she sang too much on, so it’d be weird to play those particular songs. At this point we have enough songs so it’s not hard to fill a set. We’re definitely still friends though- she’s a great gal.

VM: Have you ever felt intimidated by the pedestal that so many people seem have to put ‘Illuminate’ on when it comes to writing new music?

LA: Eh, I would say no just because I won’t let myself do that. It’s just a terrible thing to do if you’re trying to be creative and artistic. I feel like you should always be trying move forward and create new and exciting things. It just seems like a weird way to go about creating something- holding yourself to a thing you did in the past. I already did that, I don’t want to do that again. And then there are those people who are like “Oh, it’s not as good as Illuminate” or “It’s better than Illuminate”; I’ve learned to not let the affect how I want to write the next album. It’s not that I don’t care, it’s just…I guess I don’t care. And you shouldn’t care, really.

VM: With that said, have you been pleased with the fans response to ‘Devil’?

LA: Absolutely. I’ve been very impressed with the response. I’ve had so many people tell me that it’s their favorite record, which is cool because I don’t want to be that band that keeps putting out shittier and shittier records.

VM: Will there be another Holiday cover release this Christmas?

LA: I haven’t thought about it, to be honest. Did you really enjoy the last one?

VM: I did! I made this little video montage of my family at our Christmas festivities and I used that track as the background music.

LA: Yeah? Thank you! I just really have always loved that song. I love Holiday music; there’s some that is too much, but there so many good Holiday songs. I might need to do another one.

VM: Have your band members supported your endeavors in regards to The Cinema, and is there anything new coming from that in the near future?

LA: Yes, absolutely. They all love it, as well. We are about 90% done with a new album, and about a week and a half after we get back home I’m going to fly out to Atlanta to put the finishing touches on the record. It’s going to be out probably in January.

VM: My past experiences at your shows have proven to get rather intimate- would you consider doing a house show tour to keep the intimacy a real thing for Lydia shows?

LA: We’ve talked about doing a house tour before. To be perfectly honest, I’m not really sure why it hasn’t gone through. There’s definitely been talk about it because it’s a really cool concept. A lot of my close friends have done house tours, and it just sounds like a really good time.  A lot of bands seem to be going that route, and I can understand- they don’t have to pay anybody, all of their fans can get in, they don’t have to deal with a venue. We’ve definitely talked about it, and we’ll probably do one, I just couldn’t tell you when.

VM: Right on! If you want to come to Georgia I’m sure we could make something available for you.

LA: Yeah, totally. If we do the house tour it’s going to be a nationwide thing, we just don’t have it in the works right now. I’m glad you brought that up, though, because I’m going to bring that up again.

VM: What’s your favorite venue that you’ve ever played?

LA:  We played it on this tour, but in general it’s the House of Blues in Chicago. It’s just really cool. It’s like this three-tiered thing and its right on this river that goes right through downtown Chicago. It’s really old, but not in a bad way.  It may not be my absolute favorite, but it’s definitely one of them.

VM: What’s the next plan of action for Lydia when tour wraps?

LA: We’re probably just going to take a month or so off, and then we’re doing another headlining tour in April.

VM: Will that be in the states or no?

LA: Yeah, in the states, and probably the UK, as well. It’s all still in the works, but we’ll definitely be back through the states in the spring.

1 thought on “Catching up with Lydia”