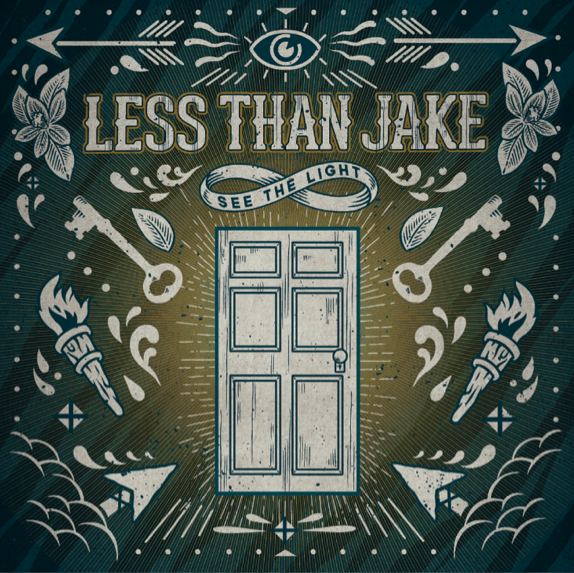 For the first time in five years, Less Than Jake is dropping a full-length album (THIS MONTH), and to say that there’s much anticipation as to what to kind of musical magic these guys have created wouldn’t even scratch the surface.  Less Than Jake has become a timeless staple in the punk/ska scene, with a fan base literally ranging for multiples of generations. The new album, titled See The Light, is without a doubt a back-to-the-basics project that worked in all the right ways. Vinyl Mag got a first listen to the album, and we decided to share our thoughts with you guys…

The 13-track album kicks off with “Good Enough”, a track deeply seeded in Less Than Jake’s ska roots, setting the tone for – presumably – a feel good album.

“The Loudest Songs” is the fourth track on the album and what I would consider the anthem of the album. “Do you really think summer can save us?  Do you think the loudest songs can be the cure?  I believe it’s possible that words and chords can make us strong and make you feel alive- the loudest songs.”

By the time “Bless The Cracks” comes on, the one thing that really comes to mind is that this album is shaping up to be a reflection – almost a tribute – of the past two decades of LTJ’s sound; not a whole lot of the “now,” but ample amounts of “then.” And we’re not complaining.

As I’m making my way through this album, another fact I’ve found noteworthy is the distinction between each of the songs. Each is either predominantly ska-based, punk-based, etc., and the fact that you can pinpoint these influences in each song makes it a really fun listen.

With that said, track 10, “Give Me Something To Believe In” really embodies their ska sound, and the very next song, “Sunstroke”, goes in the complete opposite direction and takes on the punk rock sound.

“Weekends All Year Long” is the last track on the album, hyping the energy back up to level 10 one last time before the album is over, and you inevitably play it again…I certainly did.

As a product of the later generation of the punk-rock days, I can honestly say I missed out on a good bit of the Less Than Jake glory days; but I can say that I truly appreciate what’s happening in See The Light, no to mention the blood, sweat, tears, and years these guys have put into the making of this.  The album drops November 12th, and the band will be touring the states through December- act accordingly, Vinyl viewers!

*Vinyl Mag will also be INTERVIEWING these guys at their show at the Georgia Theatre in Athens, GA on November 6, so get ready – and Athenians, we better see you there!

1 thought on “Less Than Jake: See The Light”