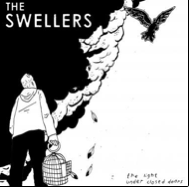 Contrary to what their last album may have led you to believe, The Swellers have not, in fact, ran out of places to go. The band released their latest album, The Light Under Closed Doors, earlier this month, and Vinyl got a first listen. Were we impressed? Definitely. Surprised? Not in the least.

As a devoted Vinyl follower (you are, right?), you already know that Vinyl has a deep appreciation for these guys (see previous interview from 2012). This album has proven us right about The Swellers once again.

The first song on the album, simplistically titled “Should”, kicks the album off with a bang. This is where they catch my attention; this is where I begin to get excited for what my ears are in for throughout the rest of the album.

The second track, “Big Hearts”, picks up the pace a bit and gets back to the roots of the age-old “punk rock problems.” Perspective is easily lost when it comes to what any band trying to make it actually goes through, but this track reminds you of the heart that goes into the lifestyle. Carry on, you wayward souls, because you’re efforts are not going unnoticed.

“Got Social” is the third track, and one that I feel I (and probably you guys, too) could really relate to. You know that fairweather friend/ex/whatever that decided they were too cool and, essentially, forgot where they came from or the ones who were there for them along the way? Those guys suck- this song does not.

The next three songs kind of fell under the radar a bit in comparison to the album, but not nearly enough to sway my affection from what is really going under those closed doors.

Another song that really caught my attention was “Designated Driver”.  I again found myself relating to the lyrics “Last night proved to be an adjustment/ against my better judgment/ cleaning up for drunken friends/ I must have slipped your mind again.” This track is full of catchy symbolism, and yes, I’m a sucker for that kind of writing.

The Swellers cleverly cap the album off with “Call It A Night”, a track singing of knowing when to give up and when to just say when.

All in all, this album had me feeling like I was discovering The Swellers for the first time all over again. Like a fine wine, these guys just keep getting better with age. The Swellers are touring the states throughout the month of November, and if you value our Vinyl opinion as much as I think you do, catching their set wouldn’t be a bad idea.