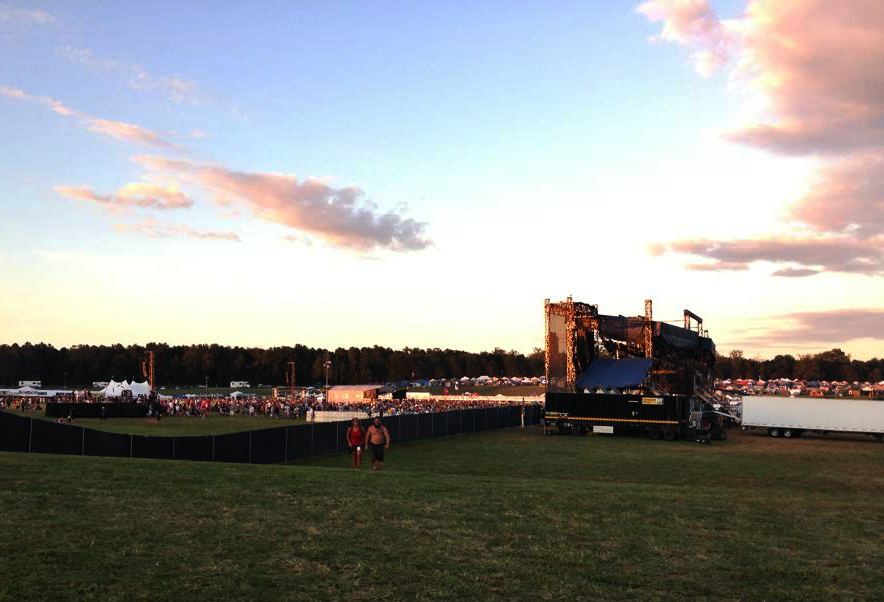 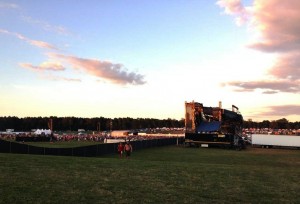 The last day of a four day festival is always that day when you know you are completely exhausted and perhaps just totally burned out, but any fatigue is suppressed by the notion that there are great music and vibes to bask in for just one last day. Although “Sunday Funday” was about to commence at Lockn’, there was nothing fun about what was going on in the car camping fields. Despite the fourth beautiful morning and waking up to blue skies and the sun just touching above the mountain backdrop, a repugnant stench from the deplorable provided porta-johns, which had never been cleaned once over the entire weekend, wafted through the camping field. After twenty-four hours of pleas to staff and to Lockn’ via social media which started on the previous day, alleviation from this overlooked logistic for campers came around 5:00PM Sunday. My gratitude still goes out to the men who had to clean those those plastic stalls of something that can only be described as a defecation hell.

With images and stenches that I hope to never see or smell again behind me, Sunday did in fact prove to be one hell of a finale to what was truly an amazing and momentous weekend. The music started off with yet again another local Charlottesville bluegrass band, this time being the Hackensaw Boys. The set was a perfect start to the day and set the crowd up for the second act of the day, Col. Bruce Hampton & Friends w/ Oteil.

From the fabrications that Neil Young would in fact make an appearance at Lockn to the speculation surrounding why/how Trey Anastasio had been added to the lineup, Lockn’ was somewhat of a rumor mill and Col. Bruce’s set just added to the disillusioned hopes. Although a very plausible assumption considering Jeff Snipe, Oteil Burbridge, Jimmy Herring, and of course Col. Bruce Hampton were all present at Lockn that Sunday, it had been anticipated that a possible Aquarium Rescue Unit reunion would take place. As much as crowd members hoped for the reunion it did not occur, but that doesn’t mean Col. Bruce Hampton & Friends’ set was a flop, quite the opposite actually. In addition to Snipe and Burbridge joining the set later on, Eric Krasno, Soulive and Lettuce guitarist, also found himself on stage that afternoon.

Fresh off an album release, the Tedeschi Trucks Band band took to the stage next and delivered a set chock full of collaborations. Off of their new album they delivered “Made Up Mind,” “Do I Look Worried,” and “Part of Me.” Remarking that this was one of her favorite songs written by band guitarist Mike Mattison, Tedeschi sang a beautiful soulful “Midnight In Harlem.” Krasno accompanied TTB on a version of John Prine’s “Angels from Montgomery” that included a “Sugaree” tease. Just when you thought the set couldn’t get any better, Chris Robinson, Bob Weir, Jackie Greene, Burbridge, and Krasno all sat in on celebratory “Sing A Simple Song > I Want To Take You Higher.”

Robinson greeted the audience to the beautiful Sunday afternoon with “Seeing Things” followed by “My Morning Song > Stare It Cold > My Morning Song.” In addition to Black Crowes’ classics such as “Garden Gate,” Nonfiction,” and “Shine Along,” notable covers included Joe Cocker’s “Space Captain” and The Velvet Underground’s “Oh! Sweet Nuthin’” with Robinson’s brother Rich Robinson on lead vocals. The Tedeschi Trucks Band returned to the stage to collaborate on Ray Charles’ “Let’s Go Get Stoned” and they remained on stage for the last song of the set, Bobby “Blue” Bland’s “Turn On Your Light,” which included an appearance from Bob Weir.

The sets full of guest performances and collaborations continued with Widespread Panic’s second set of Lockn. This sunset set kicked off with “Conrad The Caterpiller” and “Please” into an ode to Neil Young with a fiery “Mr. Soul” that highlighted what Herring does best with his guitar. The always favorite instrumental “Disco” got the crowd dancing up a dusty storm and a re-boost in energy came with Robert Johnson’s “Stop Breakin’ Down” and a cover from one of their favorite bands, as John Bell put it, “Can’t Get High.” Keyboardist John “JoJo” Herman had the opportunity to show off his expertise with J.J. Cale’s “Ride Me High,” another staple and perfected Panic cover. Derek Trucks sat in on “Chilly Water,” Robert Johnson’s “Me and the Devil Blues,” and Jerry Joseph’s “North,” to close out the set. Between Herring and Trucks, this was an on-point collaboration that had festival attendees reminiscing hours and even days after this set had ended.

The last show of the weekend was performed by none other than crowd favorite Furthur. Opening the set was the Grateful Dead’s “Terrapin Station,” followed by “Samson And Delilah” with Susan Tedeschi on guitar and vocals. Herring sat in on classics “Brown-Eyed Women” and “Box of Rain.” Tedeschi returned again for a cover of Traffic’s “Dear Mr. Fantasy,” “Playing in the Band,” and “Standing on the Moon.” Furthur came full circle and closed out their set with “Terrapin Flyer > Terrapin Reprise;” in a sense, finishing what they had started. A melancholy spirit blanketed the crowd as the realization that all was coming to a close as Furthur returned to the stage one last time. Phil Lesh stood on stage, as he has done at the end of shows since his liver transplant in 1998, and delivered his organ donor rap. The encore was a beautiful “Brokedown Palace” that peacefully lullabied the crowd and proved to be an appropriate finish to a weekend that provided not only sweet songs, but rocked our souls.