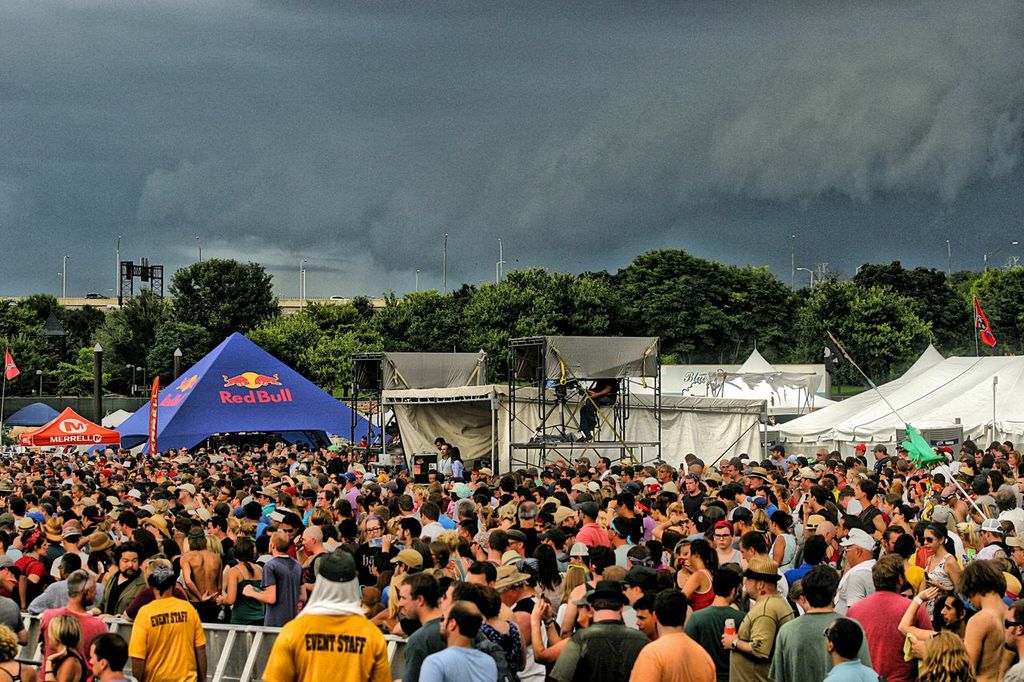 The last day of Forecastle was sweltering, and inclement weather loomed for later in the day. Waking up that morning, we were in for a bit of an unpleasant surprise.  We had been made aware of Animal Collective’s cancellation days prior to the festival, but it seemed that Dan Deacon suddenly just disappeared off of the schedule.  Besides these disappointments, there was much to look forward to including Toro Y Moi, The Forecastle Incident, Purity Ring, and the legend Robert Plant.

I first saw Toro Y Moi during his SXSW set this year where I thoroughly enjoyed his set of chill pop, and sounds of R&B, jazz and funk. His Forecastle set was no different. Walking up to the main stage there was a decent crowd gathered who were getting down to his music in the late afternoon. He set the tone and was an appropriate act to be placed before Grace Potter and the Nocturnals.

Greensky Bluegrass was the optimum choice as opener for The Forecastle Incident on that afternoon. Fast-paced blue grass with hints of rock and roll amped up the crowed, if you couldn’t tell already by their name for what you would be in for. A cover of Prince’s “When the Doves Cry” was a pleasant surprise.

Grace Potter and the Nocturnals

Leaving Greensky Bluegrass and walking over to the main stage to catch Grace Potter and the Nocturnals, the noise overlap from stages was incredibly evident. All weekend the overlap had been bad, and is one of my biggest complaints about this festival, but for some reason Sunday during the late afternoon it was just the worst. Making my way halfway down the Grace Potter crowd to the soundboard, sound overlap from the Red Bull Ocean Stage was intense. Every word coming from El-P & Killer Mike could be heard crystal clear- annoying is an understatement.

But knowing how Grace Potter brings it to the stage, either way, noise overlap or not, this audience was about to get a real afternoon treat. Her stage presence is always amazing and on point. Her energy is incredible as she dances around on stage in a sparkling ensemble, killing it on her guitar, laying on the ground to flick off her shoes, and her piano skills are addicting. It’s hard to be in the audience at a Grace Potter show and not be drawn into her music and lyrics by her genuine emotion, it’s quite addicting.

After an absolute high was implanted in the audience from Greensky Bluegrass, there was an overall feeling that anyone at the Boom Stage for The Forecastle Incident was about to be treated to something special that afternoon. How could this set not be special when you have The String Cheese Incident, Sam Bush, Ronnie McCoury, Jason Carter, and Andy Thorn all on one stage. The set was a mix of Cheese and bluegrass favorites, completely instrumental. With so much talent packed on the stage, the music that was produced that afternoon was memorable and impeccable. At the end of the set I left feeling absolutely content and fulfilled, but also unsure of when, and if ever, I will be treated to something like that for awhile, or ever again.

He’s a legend, what else can I say? Black clouds loomed in the distance and it was only a matter of time before the skies opened up and torrential rain, accompanied by thunder and lightening, would cut Plant’s set short. Songs included, “ Tin Pan Valley,” “Black Dog,” “Going to California,” and “What Is and What Should Never Be.” Everyone seemed to be enjoying themselves and there were a lot of wide eyes as this was a first time for seeing Robert Plant for many. When the rain came there was no stopping it, “Upon us all, upon us all a little rain must fall…It’s just a little rain.” (Led Zeppelin)

Overall the festival was jam packed with incredible music, (for the most part) some beautiful weather, and it just was a memorable experience. The pros defiantly outweighed the cons this weekend, and if the 2014 lineup looks promising, I wouldn’t mind making the trek all the way back to Louisville.