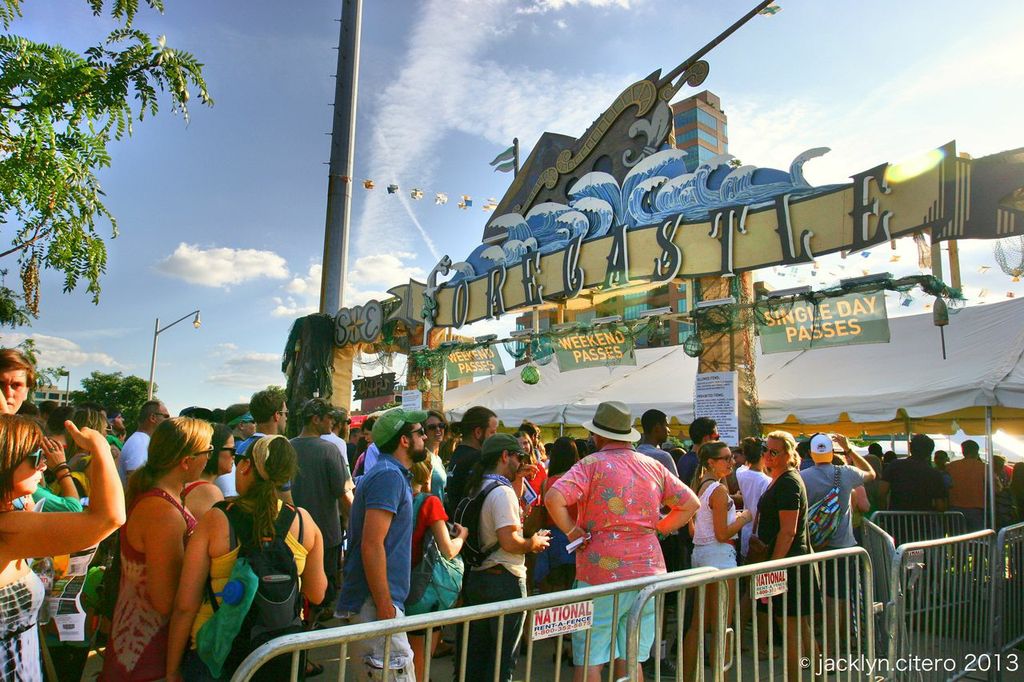 After taking a seven-hour trek and making it through the cluster of endless lines of eager festival goers, we were finally greeted by Louisville’s 85-acre Waterfront Park overlooking the Ohio River. With a lineup including headliners The Black Keys, The String Cheese Incident, The Avett Brothers, and Robert Plant, Forecastle Festival seemed to have something for everyone. Since its start in 2002, Forecastle has evolved from a homegrown local festival to a nationally recognized and flocked-to music experience.

In addition to the four stages pumping out nonstop music all weekend, the festival grounds were host to numerous live art displays, a Kentucky Bourbon Lodge, and a poster showcase of some of today’s most recognized poster makers. Food options were abundant with local offerings like the Holy Mole Taco Truck, Heine Brothers Coffee, and Jeni’s Splendid Ice Creams, festival favorites like Pie for the People and Grateful Burrito Brothers, and chain vendors Jim ‘N Nicks’s Bar-B-Q.

As a city fest, with noise ordinances stopping music around midnight, Forecastle kept the party going with three late night shows. Kentucky native Wick-It the Instigator and Eliot Lipp hit the stage on Lousiville’s own riverboat the Belle of Louisville Friday night. The String Cheese Incident took over The Louisville Palace Theater with a midnight show Saturday night, but if Cheese wasn’t your thing, the Belle of Louisville was host to the sold out late night Houndmouth show with Night Beds and The Wheeler Brothers.

We can’t start talking about Friday without talking about the horrendous lines we were greeted with at both festival entrances. After arriving around 6:30 p.m., we finally made it in 45 minutes later just in time to catch Big Boi and kick off this Forecastle weekend. With the sun shining and a breeze coming off the Ohio River, we hit up the Boom Stage just as the crowd began to sing “Ah ha, hush that fuss, Everybody move to the back of the bus”.

The favorites and classic Outkast songs were played: “Rosa Parks,” “Ghetto Musick,” “The Whole World,” “Ms. Jackson,” “So Fresh, So Clean,” and “The Whole World”. Even with a “Bombs Over Baghdad” tease, the crowd still loved every minute of his set.  Although still in recovery from a knee injury from earlier this year, Big Boi told the crowd he was not going to miss Forecastle and braved the stage on crutches and sang from a throne ornately decorated in red velvet and gold embellishments.

As the sun began to set over the river and barges floated by, the backdrop was set for a pluckin’ good time on the Mast (main) Stage. Although murmurs could be heard throughout the crowd just wanting and wishing to hear “Wagon Wheel”, Old Crow Medicine Show delivered a set that kept the crowds dancing and stomping their feet. With covers and easy sing-a-longs to “This Land is Your Land” and Tom Petty’s “American Girl” the scene was set in anticipation for Friday’s headliner The String Cheese Incident.

In the cool of the night, under the explosion of pre-show fireworks, a circus of sorts was about to start on the banks of the Ohio river. Those familiar with a String Cheese show had an inkling of the party that was about to erupt out of an otherwise typical festival incident, and those seeing Cheese for the first time were unprepared for the massive dose of fun that was in store. “Rosie” kicked off the set followed by “Best Feeling” into “On the Road.” A cover of Aerosmith’s “Walk This Way” really seemed to get the crowd going. The rest of the set included “Song In My Head,” “Sirens,” “Let’s Go Outside,” and “It Is What It Is.” “Valley of Jig” and a stellar “Colorado Bluebird Sky” closed out the night. Overall, Cheese delivered fun and heightened our anticipation for the late night Palace show.