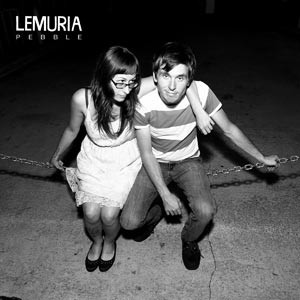 After catching their set at SXSW, Lemuria stuck in my head and grew as an unshakable interest in my mind. Lemuria was formed in Buffalo, NY and have since spread themselves around the country. With the release of their newest album The Distance Is So Big, we figured now we would be a good time chat about the past, the present, and the personal in regards to Lemuria. A big thank you is in order for Sheena Ozzella and Alex Kerns for being so gracious and forth-coming and making this happen. After checking out this super rad interview, head on over and have a listen to Lemuria’s “Oahu, Hawaii”, which can be streamed here.

Vinyl Mag:  Whose idea was it to name the band Lemuria, and is it directly related to the lost land theory?

Alex Kerns: It was my idea. At the time I was reading a lot of mythical books about lost continents like Atlantis and Lemuria. I kind of just picked the name, and Sheena liked it so it stuck.

Sheena Ozzella: We knew we wanted it to be a one-word band name.

AK: We were kind of hoping it would be a name that no other band had, but we later found out that there was a band from Belgium that had the same name and the same kind of idea that we had. We actually got to meet a couple of guys from the band, and they were wearing their Lemuria shirt for their band; they came up and talked to us and were super nice. We’ve kept in touch with them over the years.

VM: How was the connection made with Kind of Like Spitting for the split you did “Your Living Rooms All Over Me”?

AK: I just kind of randomly met Ben, and we became friends. When we put out our first demo, he got a hold of it and liked it a lot. We just stayed good friends ever since we first met, so we decided to do a split LP and a full U.S. Tour together. Still today we’re friends. We’ve been talking about doing some UK shows together and stuff like that.

SO: Kind Of Like Spitting was one of my favorite bands for a really long time before he met them, so when he met them, and I found out that he had met Ben I was really excited. One thing led to another, and when we decided to do the split together it was definitely one of the coolest things to make something with a band that was actually one of your favorite bands.

VM: As far as the lyrics go, is it a group effort? Who does the primary lyrical writing?

SO: I would say Alex writes most of the material for Lemuria. Alex is a man of many words; he’s really good at summing up what he’s trying to say. His lyrics are very straightforward and very simplistic, but they tell stories, and they do a lot more than you would think in just a small amount of words. Alex also tends to write a lot faster than I do. But yeah, I write maybe one third of the lyrics, but I don’t say sh*t as good as Alex.

AK: For the record, I love Sheena’s lyrics, and I wish she would write more, but I just write faster, I guess.

VM: [To Sheena] How does it feel to not only be in a band with such talented musicians, but to also be dating one [guitarist Chris Moore]?

SO: Ooooh, a question about my boyfriend! It’s awesome. I’ve known Chris for a very long time- maybe close to 10 years now? We started dating four years ago, and since then we’ve both been in full-time touring bands, him in four bands. It’s awesome because in so many ways understand each other, but in other ways it’s kind of sad, because we don’t get to see each other very often when we are actively touring.  But, I love him and I support him, and he does the same for me, so it’s working. We’re about to embark on three months without seeing each other, and that’s about the longest we’ve ever gone. But its good, and we’re both good and doing really exciting things. I’m very happy.

VM: Is the title of the new album The Distance Is So Big symbolic to the geographic location of the band members, or is it something bigger than that?

AK: Kind of. It’s actually a lyric from one of our songs on the album called “Oahu, Hawaii”, and in that song it doesn’t really have to do anything with the band, but it’s more so something to do with a relationship. But overall, that line kind of sums up a lot for the band. Internally with the band, we’re all in different places.  But also, we all – in the past – and even in the present have been in long distance relationships. It just seems like it’s always been a big factor for our band.

VM: Leading into my next question- being that everyone in the band does live in different states, how do you feel that affects the writing and recording process?

SO: I think we’ve been more productive than we’ve ever been; it’s made the time we are around each other ‘go time.’ Whenever we would get together, we would have 8-hour long practices and were very much structured around writing an album. It feels a lot more focused now that we all live in separate places.

VM: How did you find your home at Bridge 9 records?

AK: We just heard that they were listening to our first album, Get Better, at their offices through mutual friends. So when we were recording Pebble we figured we should send them an e-mail and see if they were interested. It was an oddball signing, but I think that it really made sense mutually.

SO: I think it also opened up Bridge 9 to signing other bands that were like us. I know that from talking to Chris [Wrenn, starter of Bridge 9] that is has been a really positive thing for them in regards to him putting out things that he really enjoys, and that’s the point of a record label.

VM: Would you say that your first released track off of the new album, “Brilliant Dancer”, is a good depiction of the sound you’re going for with this record?

AK: Yeah. The album is pretty upbeat and optimistic. It’s a long album and little more epic of an album for us.

VM: How was your experience at SXSW this year?

AK: I thought it was a lot of fun. It was exhausting, because it’s one of those things where you can’t just drive your car up to the venue, unload, and play – you have to find parking and walk a mile and all of that. But overall, it was great and a fun festival, and we had a really great time. We played four shows altogether, and all four were worth the trip.

SO: We played for a lot of new people, which is always really exciting. I think we were one of the smaller bands who played SXSW, and I felt like at every show I really appreciated the amount of people who came out to see us. We felt welcomed, and it meant a lot.

VM: Last question- you’re noted for playing “The Fest” in Gainesville, FL every year; will you be playing again this year?

AK: Yeah, we’ll be there. If we didn’t play The Fest it would be a really bad year for us. It’s kind of the weekend we look forward to the most.