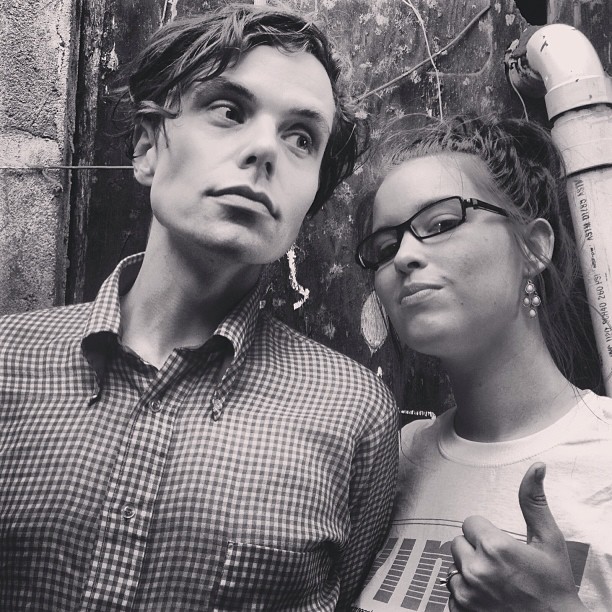 On day three of SXSW, I was privileged (yes…Privilege-d…get it?) to be able to meet with Zac Pennington from Parenthetical Girls.  Play on words, yes, but no less a true statement.  Parenthetical Girls are an experimental-pop group from Oregon who have an eclectic style and dabble in everything from orchestral to electronic elements. After running into (and then conquering) my usual navigational challenges, I connected with after the band’s show at Old Emo’s, where I was able to get the scoop on important topics ranging from Taylor Swift to conceptual influences. Intrigued? Read on. Because you know you want to……

Vinyl Mag: How was the set?

Zac Pennington: It went really well; we had some technical problems, but that’s to be expected.

VM: Right on. How many shows have you played so far?

ZP: This is our third, and we have two more. Tomorrow [Friday] we have off, and then two on Saturday.

VM: Why the transition from Swastika Girls to Parenthetical Girls?

ZP:  That name was pretty short-lived. We had that name for a couple of months and essentially just decided against it. It was more of a burden to bear than I had liked to have. It was just difficult, because I didn’t care enough about it to have to defend it all the time.

VM: Have you been to/played a SXSW before?

ZP:  We came one other time a few years ago- I guess it was in 2008. We kind of took a long break from it- it was just too much.  I can imagine it would be really nice as a spectator.

VM: I can’t imagine how exhausting it must be- even just the drive from Oregon must have been brutal.

ZP:  SXSW landed in the middle of a little tour we’re doing throughout the US, so it’s been broken up, at least.

ZP:  We’re going to Dallas and then heading northward to Birmingham and Atlanta, and then up the east coast.

VM: Do you prefer to be touring or is it just par for the course?

ZP:  I like it. It’s nice to tour; otherwise I often feel like I’m not doing enough. When you’re touring, its all that you can do, and you spend all of your time doing that one thing, so there’s no option to get distracted from it.

VM: Have you had any favorite sets that you’ve caught so far?

ZP:  To be honest, I haven’t seen a lot so far. Last night we played with the band Maserati; I didn’t catch it, but Paul (drummer) caught it and said it was one of the greatest shows he’s seen in years. There is this band called Austra that I’m a big fan of and really want to see. I would also love to see Nick Cave, but I think that’s probably not going to happen.

VM: So, Privilege Is Over released February 19th– how have the fans responded thus far?

ZP:  Fairly well.  It’s an interesting project; a lot of the material that’s on the album – I guess all of it – has been released in some form or another. We started this project by doing a series of 12” EPs. Its been interesting. For the people who follow us really closely, they’re kind of already familiar with the material.  It’s a condensed version of works as an individual piece for people, but also, ideally for people who maybe haven’t been involved with us so much. Its an easier thing to consume as a listener.

VM: How did the idea of Privilege the series come about?

ZP:  We made an album in 2008 called Entanglement that was an orchestral-pop album; we recorded it with an orchestra, and it took a really long time and was really labor-intensive. So, we decided that didn’t want to take that long to make another album, and we tend to take kind of a long time, and so the idea of making shorter statement was kind of pragmatic. Also, I feel it was a way for us to try a bunch of different thing that maybe we wouldn’t have felt comfortable doing if we were making a whole album.

VM:  Who or what influenced the idea of Privilege and the fictional-characteristic concept?

PG: The idea of Privilege is a vast and wide idea that means a lot of things. In the case of this album, most explicitly, the easiest way to relate it would be monetary privilege. Generally, though, class affects everything in our culture, whatever that fundamentally even means.

VM: Who do you draw your influences from musically; who are you into right now?

VM: Explain the concept behind ‘Curtains’ (the video).

PG: Well, that song was the last song on the album of the entire series, and it’s kind of an epitaph for the whole project, so I really wanted to make a literal Viking-burial. Initially, I wanted to have a public hanging, but I couldn’t figure out how to do it cheaply. With this, all I had to do was buy a boat so we could set it on fire- it was a lot easier and less expensive than you’d think. It was just a nice farewell to the project, and in some ways it was like a eulogy to Parenthetical Girls as it was.

VM: How do you choose your album artwork and any artwork that represents the band?

PG: I’m a really big fan of commercial illustration, so for all of the records, I’ve commissioned pieces from illustrators that I really like. A lot of the stuff that we make is actually Amber who plays the keyboard; she hasn’t done one of our album covers yet, but she does a lot of the other illustrations.

VM: What are your plans for 2013 as a whole? What will you be working on next?

PG: We’re continuing to tour for the first half of the year. We’ve been working on some new material, but nothing that is really definable yet. We’re hoping to put out a new album much more quickly than we have [in the past]. We hope to have one out by next year, but we also take longer than we anticipate, so who knows.