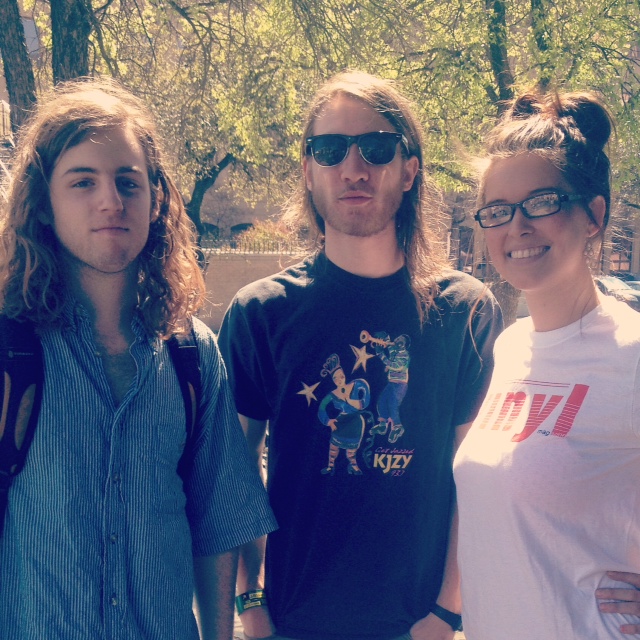 Upon first listen, I quickly realized that New Madrid would turn into one of my favorite SXSW finds. The music they make is powerful; it forces you into a trance-like state and transcends the boundaries of your mind far from worldly concerns. Each time I play Yardboat, I feel a little more free and lot closer to myself and the music. It’s definitely one of those experiential listens that you kind of want to share, but kind of want to keep to yourself all at the same time. Fear not, though, because we at Vinyl decided to share it with you. This four-piece Athens-based group has created something special, and we got the chance to meet with them during SXSW. Feast your eyes on what they had to say, and then I highly recommend you go listen to Yardboat, streaming now for free on their website.

Vinyl Mag: Is this your first year playing SXSW?  If so, are you expecting it to affect your musical career?

VM: What sets would you like to catch while you’re here?

NM [Ben]: I want to try to check out Dive today; they’re playing right off of Sixth at 5:00. Unknown Mortal Orchestra- I really want to see them. Hopefully we will catch Futurebirds play.

VM: You have actually played shows with Futurebirds, right?

NM [Ben]: Yeah, totally, we’ve played with them a couple of times.

VM: Did David Barbe and Joe Lambert approach the band to work on Yardboat or vice versa? How was that experience as a whole?

NM [Ben]: We hooked up with David in Athens just playing shows. We won a contest to get a session in the studio, and he saw us play a show and wanted to do some recording with us. So we set up three days and worked with him.

VM: Did you knock it out in three days?!

NM [Ben]: All of the instrumental tracking, yeah. We did the vocals later. Phil lived in Athens at the time, so he could just come in whenever David had a free hour or something. We mixed it over two weekends just trying to get it done.

VM: Phil- do you currently live in Athens?

VM: Was the move from Tennessee a professional or circumstantial move?

NM [Phil]: We had all wanted to move the year before. We had done these demo sessions, and we were all like, ‘let’s just do it. Let’s just move to Athens.’  But we decided we needed to get something together first. So we finished the record and had something to be proud of.  We all moved together and we all live together. We live in a barn; it’s pretty awesome.

VM: What’s in store this year for New Madrid?

NM [Ben]: Keep on playing shows. Get back into the recording studio. After SXSW, we’re just going back home. We had about five or six shows down here, and we did a tour to get down here. When we get back to Athens, we’ve got a schedule for the last half of March and first half of April at this place called The Green Room.

VM: Who did the artwork for Summer Dream Sigh and Ghost and Fire?

NM [Phil]:Two different people; Summer Dream Sigh I did, and our friend Anna Dewitt, who lives in Nashville, did Ghost and Fire.

VM: How did the album writing process go for Yardboat? Was it instrumentals first or were the songs created around the lyrics?

NM [Phil]: It’s really all over the board, but some of the songs on Yardboat were songs that I had written in high school, and I matched the words and the guitar parts together. With other stuff the instrumentals come and in a stream of consciousness, the words just come.

1 thought on “SXSW with New Madrid”