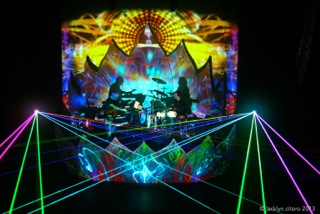 On the eve of a month that many of us consider to be the start of the season of spring, a flower was in full bloom. Instead of promises of warmer weather, the blooming spectacle of EOTO’s iconic lotus flower stage promised concertgoers a night of seemingly endless body-moving jams. The duo, comprised of Jason Hann and Michael Travis, both members of the acclaimed jam band The String Cheese Incident, played the Georgia Theatre in Athens on February 28. The electro-jam show was a complete improvised, free-formed, and live mixed party.

With anticipation for the main act growing, opener Crizzly and his MC took the stage with high energy that translated through the receptiveness of the crowd. Between the bass drops and familiar hip hop samples, Crizzly’s set of “crunkstep” enthralled the audience and the party started — the night could only go up from there. 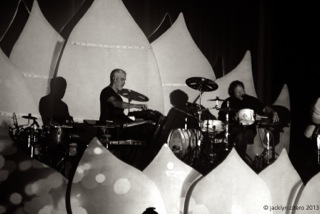 As Hann and Travis took to the lotus stage, a welcoming roar of the crowd filled the theatre. The set began with down tempo jams and complementing visuals as the lotus flower morphed with colors of pinks, purples, and blues. It wasn’t long until EOTO was building the crowd up through a fusion of jam and dubstep. In addition to the inevitable bass drop that was to come next, EOTO pleasantly surprised the crowd with laser visuals. This use of lasers and the manifestation of psychedelic images on the lotus set the tone for the rest of this livetronica set.

Travis’ use of his MacBooks, software, keyboards, guitar, and bongos, and Hann’s drumming and vocals kept the audience on a unstoppable trip of funky heavy house music. With a steady energy of builds and drops, Hann’s spitting freestyle was added into the equation. Throughout the night, the music of EOTO was constantly evolving and maintaining a pace that left the crowd constantly wanting more.

The set progressed into a blend of something I can only define as Arabian reggae–sounds of the Middle East fused with slow motion grooves and island vibes. This journey of worldly sounds eventually blasted off into a raw spacey trance with an accompaniment of mesmerizing visuals. Heavy bass and a fast tempo throughout the rest of the show kept the crowd continually raging until the very end.

With the end of the encore and the house lights of the Georgia Theatre turned on, a disappointment swept over many in the crowd that night. A disappointment because the intoxicating transcendental escape from reality was over.