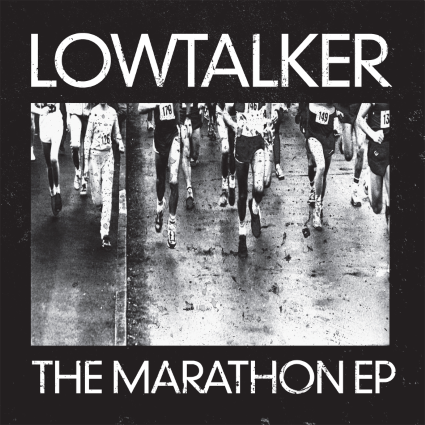 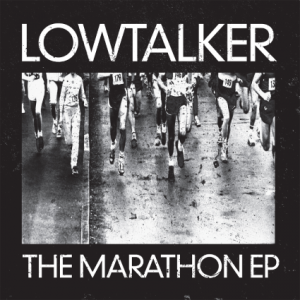 Lowtalker is the combined effort of former Living With Lions, Misery Signals, and Comeback Kid members who will be releasing their debut EP, The Marathon, under No Sleep Records on September 18th.

Stu Ross, Matt Keil, and Casey Hjelmberg formed the band in 2008, naming themselves after a reference to the “Puffy Shirt” episode of Seinfield.

Ross, who was born in Canada, essentially fronts the band as the singer, while also playing the guitar and contributing as one of the songwriters. What he brings musically is matched by what he brings visually, having done the artwork for the first EP, People Worry About Everything.  Keil plays bass, sings, and assumes the role of the mathematical brain in relation to the business.  Hjelmberg plays the guitar (and takes credit for coming up with the band’s name).

Upon first listen to The Marathon, I realized that pinpointing a particular band to compare their sound to wouldn’t be an easy task. Their post-hardcore/punk roots definitely flare through, but each member brings something unique to create a fresh sound.

The EP kicks off with the song “Like Minnows”, a fast-paced, personal recount of seemingly personal experiences with life’s relationships, making it easy to relate to.

“Tensions” is the second track and has a sound of its own. If I were to choose, I would claim it as my favorite of them all.  Repetitive hooks and catchy melodies get me every time.

Self-medicating seems to be an underlying theme throughout the EP, sounding loud and clear in the third track, “Prescriptions”. In our interview conducted earlier this month, Ross revealed that the song is based on a family member of his that has dealt with prescription drug abuse for the last 20+ years.

The EP ends with the appropriately-titled track “Chances” that sings of hopefully looking forward, letting go of your past, and the ghosts that can haunt you if you let them.

Lowtalker will be the hitting the road in October for a short stint of touring which includes a show in their hometown of Milwaukee, Wisconsin.

Personally, this was a great listen from start to finish and will be on repeat for awhile in my musical library. What I find nice about this EP is that it can be enjoyed as a morning starter, a musical night-cap, and anything in between.

Be sure to check out Lowtalker. Catch a show and snag a copy of the EP once released later this month.