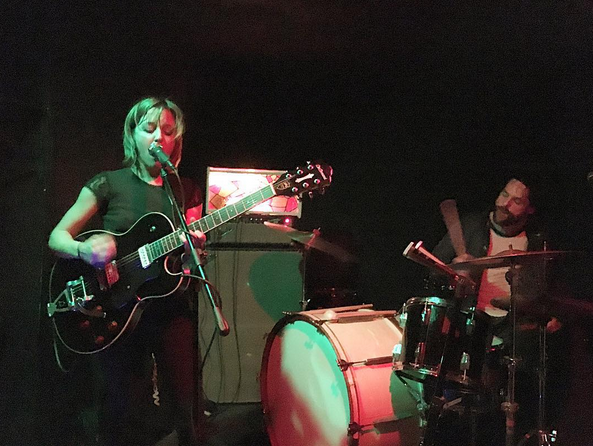 Becky Kessler and Floyd Kellogg didn’t meet with the intention of becoming a band, but with their first album release in 2013 and another coming up next month, we’re glad Violent Mae found one another. The duo, who live five hours apart from one another—Floyd on an island off the coast of Massachusetts and Becky on an organic farm in Connecticut—met up with Vinyl Mag at Muchmore’s in Brooklyn during their one day in New York City for the CMJ festival to talk about their off the cuff creation and what’s coming up next for the band.

Yeah!! Thanks for hangin with us @ViolentMae gettin ready for this set #cmj #cmj2015 #vinylmagcmj @muchmoresny

Vinyl Mag: How did you two become a band, and where did the name “Violent Mae” come from?

Floyd Kellogg: Becky moved up from Outer Banks, and we met right away because of a mutual friend that I have a studio with. We met kinda casually through that.

Becky Kessler: I wanted to record tunes, because he has a recording studio, and I had no ambition for it to go anywhere—just wanted to record these tunes so I didn’t forget them but wanted to do it in a nice, good way. I actually didn’t expect it to be as cool as it was.  When we were in the studio recording, I was like if you’re inspired, drums, bass, whatever—he did that. When it came to release it, it was like well, we want to be a band now.

FK: We were thinking of having other members, but we just played duo off the cuff one night and thought, ‘Well that kind of works,’ and just kept working on it from there. The name came kind of from—we had a crazy year while we were recording that music—there were a lot of happy and darkish times, so it reflects the dichotomy of that feeling.

BK: It’s kind of inherent in the music itself, because it was some pretty moments and some kind of junky, punky moments, and I really like the contrast.

VM: When did you each individually get into music? Where do you get your inspiration for your collaborations?

FK: My uncle was a gear, techy person, and he had a bass he was fixing.  I was like 11 and used to just be drawn toward it. I thought it was a guitar, so I started playing it, and he was like, ‘No, it’s a bass!’ Then I started playing bass, and that was that. I picked up some other instruments along the way.

BK: My mom played guitar and sang, and my dad played piano. My dad actually wrote songs too, but neither one were learned, educated musicians. I started playing my dad’s piano when I was eight, but didn’t get very far with that. I started playing my mom’s guitar when I was 11 and just loved something about the guitar. We share a lot of influences, but we definitely have different ones. Both of us are really obsessed with Morphine; that’s a major influence of both of ours. I think we actually had different style stuff that just blended together really cool—or at least we like it.

FK: I think when you’re writing tunes, they were very intimate and quiet, and all my bands before were like jet-taking-off loud.

VM: How did you get involved with CMJ this year, and what other CMJ shows have you caught?

BK: We got on the CMJ charts with our last record.

FK: We were on the CMJ radio charts at 88 for a couple weeks, which was really nice, out of the blue. The record kind of stuck with them, so it seemed natural to come play the festival. We just caught a couple friends’ bands and a couple we don’t know.

BK: We caught Eternal Summers, and Terrible Roars, who are friends of ours. Then this other band that kind of blew us away, Toronto Weaves, and another band, Strange Kids.

VM: If you were in NYC for more time, what one thing would you want to do?

FK: I should be visiting friends. Hopefully I drag them out tonight; it would be nice to see them.

BK: I have one friend I haven’t seen in years coming tonight that I’m very excited about. I’m actually more nervous about that than playing the show. But I’d go see that new museum, The Whitney. I saw the building from the outside, and it looks really, really cool.

FK: I’ve never been to the Statue of Liberty. I’d really like to go.

VM: How do you handle the long-distance relationship?

BK: It’s tricky. This summer was hard, but we did alright. Every once in awhile it’s like, ‘We have to get massive amounts of stuff figured out and done in the next hour on the phone.’ And we do, usually.

FK: We have intense sessions of working on band music.

BK: When we’re not together, I’m always working on writing, like every day. When we get together, we work on making it better, tighter, with arrangements and how it’s going to go down performance-wise.

FK: Then we update social media.

VM: If you weren’t a musician, what would you do if you could be anything else?

FK: I would be a mountaineering guy or blast off avalanches. Something that has to do with being in the wilderness.

BK: I think I probably would actually be what I am some of the time—I work on an organic farm that my boyfriend and I have. I really get super attached to animals and love that part; I also love the growing part and learning more about it. It’s so hard, but I love watching the plants grow, and the animals are just amazing.

VM: What’s one of the most unexpected things that you’ve found in this process?

FK: Something that surprises me is when we’re recording or working really closely together on something, how much we don’t need to fully say to the other person, ‘That’s not working,’ and have a discussion about it. It seems like we’re in line with shit like that. We don’t do a load of talking.

BK: There’s not a lot of discussion. That’s right, that’s cool. And I was really stoked and surprised that Floyd wanted to make it a band and be in the band when he had a bunch of other stuff going on. That, and I’m also surprised how much more loud gear and guitar pedals I have. And I want a lot more. Floyd’s definitely been educating me on a lot of that stuff, and I’m really enjoying using it.

VM: Do you have a new album coming out this year? What is next for you guys and the band?

BK: It’s not technically released yet, but we have the actual physical thing. It releases November 20th. Right now you can hear “In the Sun.” We actually have a video coming out that this dude who lives here directed—it was such an awesome experience doing that. I think it’s really good, I really like it. We did a live video with the last record that is pretty cool.

FK: Big picture is playing more shows and making sure the album sees the light of day and people get to hear it. It’s fun to share music with people.

BK: I think both of us don’t think too much big picture too often. We just think what’s next, and things we want to do—like making more music videos is fun. And now it’s such a great way to share your music with people, because people have to be engaged in a million different ways. And playing more places; that’s what would be great if the music got known better it wouldn’t be so difficult finding shows in other places.

VM: Is there anything else you want the Vinyl Mag audience to know?

FK: We’re gonna be around for a minute. So stop by. 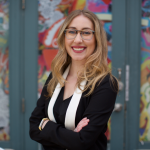