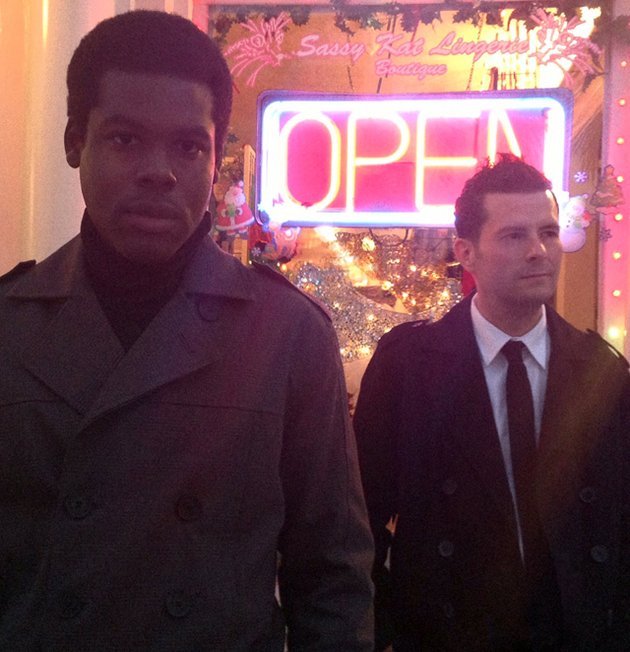 All too often, music with a retro flair just doesn’t sound… authentic. Whether the artist is trying too hard to conform to a bygone era, or a combination of several influences results in musical chaos, often, it just doesn’t feel right. Enter The Lovers Key, a soulful duo made up of guitarist Christopher Moll and vocalist Maco Monthervil. Though the two create sounds undeniably reminiscent of Sam Cooke or the Temptations, there’s a kind of truthfulness to their approach that many musicians lack – and for good reason. Moll and Monthervil met during a period of desperation in their respective lives. Moll had recently broken off from his former band, the Postmarks, and placed an ad in the paper for a singer; Monthervil had recently been rejected by a producer and only hoped to be a backup vocalist. Fate brought The Lovers Key together, and landed us the interview with them below (not to mention an exclusive song premiere – listen below as you read!).

Vinyl Mag: You clearly have some very retro influences. Who would you say has influenced your sound the most?

Maco: People assume I grew up listening to Motown and all of that, but I only discovered that in my late teens. I was exposed to what all the other kids my age were exposed to; Pop, Hip Hop and R&B. My parents are Haitian, and played French ballads and Haitian folk music, which I loved.

I just remember being four, listening to that stuff, crying, but not knowing why. It was the minor chords. I also grew up in a Haitian church, so singing was more than entertainment. I started forming my own taste when I was about seven.

I remember liking Madonna’s music, Whitney Houston, The Carpenters, Boyz II Men, TLC, The Mamas and Papas, Carole King and James Taylor. Then, I became a teenager and got into Outkast, Missy Elliott, and Neo Soul. I discovered Jazz at the nursing home where my mom worked; that’s what they loved. After high school, I started studying Sarah Vaughan. I fell in love with Jimmy Scott, Esther Phillips and Minnie Riperton, and discovered Motown. Then, I discovered Amy Winehouse; basically, what I’ve learned from her is that a singer can sing a song however they want, as long as they’re mindful of the chord progression. She’s probably my biggest modern influence.

Chris: While I’ll always have my musical influences and personal likes…I don’t often talk about the mood influences and what influences me there either getting the heart pumping or tugging on the heart strings. That’s what turns me on musically!

VM: Your debut album is set to come out this year. What has making the record been like?

Chris: It was a blast. It actually came together very, very quickly. The chemistry was there from the get go with Maco and I writing “Who’s The One You Love?’ and ‘Bright Eyes, Black Soul’ the very first night we met. I’d say that was a good night’s work.

VM: We saw on your website that you’ve been getting funding for the album through donations – has that been successful?

Chris: Yes…better than we thought. This initial round is the closest round of our friends and family and they are all play huge parts in helping us make this happen. It’s the new reality of how the creative world works and if that allows for us to have more flexibility and freedom, that’s great.

VM: Do you have any touring plans for the new album?

Chris: We just put the live version of the band together right before the holidays and it’s been amazing…playing some of the best shows I’ve EVER played in my career so far. I can only hope to take it a little wider and a little farther in the near future. Fingers crossed.

VM: You guys have a pretty interesting story about how you met. Can you give us more details?

Maco: Craigslist, on June 17, 2012. I had been working with another guy…something about a possible record deal. Then, things got called off, and he suggested that I become a background singer. So, there I was on Craigslist, depressed, disillusioned with life, and clicking on Chris’ ad cause it said something about minor chords and vintage organs.

Chris: Again…maybe it was fate. I put an ad on Craigslist…Maco answers and we meet up and “Who’s The One You Love?” and “Bright Eyes, Black Soul” drop out of the heavens. That doesn’t happen all the time.

VM: How do you make sure your old-school sound doesn’t seem outdated? Is there something you do to modernize it?

Maco: I try to make all my influences evident in my singing so as to not sound like a ’60s tribute band. I might be thinking like a jazz singer, but at the same time, I’m trying to ride the beat like a rapper, and emote like a Neo Soul artist. I said “try”. I also write exactly how I speak…so there’s never: “I’m feeling blue” or any of those phrases that people just don’t say anymore. I aim to write so that both the sentiment, and the imagery used to express it transcend time, but I want listeners to know that we’re very-much in 2014, and this is just what we like to make…right now. So, I’m not opposed to a very retro instrumental paired with more modern language…but just like you don’t hear me talk about a record player, but you won’t hear me reference an iPod either.

Chris: With all my music, whether it’s with The Lovers Key or The Postmarks, I just try and write from my heart and make sure that I’m always striving to write in a ‘timeless’ vein. I think that regardless of the sonic dressing, well written timeless music doesn’t age. That’s the goal.

VM: Are there any pros or cons to being a two-piece? Does it ever feel like there aren’t enough ideas or instrumentals?

Maco: the pros are the cons…the cons are the pros. The strengths can also be the shortcomings. You know exactly what you want, and are sure that the other person can help get you that…only, they’ll never want exactly what you want, so, there’s lots of compromising, pride-swallowing, allowing, trying, and eventually, you’ve got the best possible outcome…but that’s how the entire world works, so it’s probably easier with just two people.

Chris: Well…like a scale eventually you reach a balance. That’s the intended scenario…balancing with two during the writing process just makes it a little easier to find that center point. There is still give and take…but that’s what collaboration is about. As for musical ideas…my wells run deep.

VM: You’re from Florida, correct? How’s the music scene down there?

Chris: I’m sure like any other. It’s got its good moments and not so good moments. We do what we do and we’re supportive of the local scene but at the same time, it’s easy to become the big fish in a small pond but that does you no good in the ocean. So the goal is to be supportive and nurturing locally…but to ultimately get your music, ideas and visions out to a wider audience.

VM: If you could play a show with any artist, who would it be?

Maco: Do I have to be realistic, or no? Florence and the Machine…she seems like she’d be an incredibly nice person.

Chris: Van Halen or KISS in the 1970’s. It probably would be more fun off stage then on.

VM: We’re interested, since you clearly have such a love for classic music: what are your favorite albums of all time?

Maco: “Back to Black” by Amy Winehouse, is everything I love in one album. There are singers who sing to impress, and there are those who sing to express…she was the latter. Also, Speakerboxxx/The Love Below, by Outkast, “After Hours” by Sarah Vaughan, “Come To My Garden” by Minnie Riperton.

Chris: I always feel guilty, but it’s still my standard list. “Pet Sounds” by The Beach Boys. “Revolver” by The Beatles. “The Queen is Dead” by The Smiths. A guilty pleasure…I still have a soft spot for the first A-Ha album. I actually think outside of the dated 80’s production…there are some well written tunes on there. I feel better I admitted that.

4 thoughts on “The Lovers Key with Vinyl Mag”