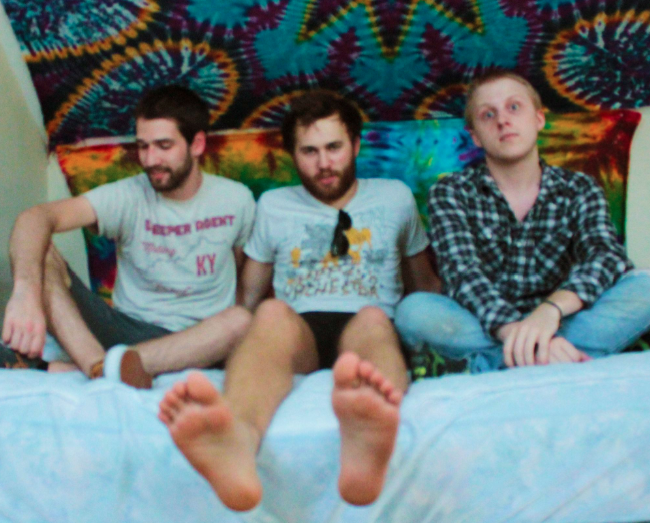 Fresh out of Atlanta comes garage-rock group Lowbanks, the grungy brain child of John Graffo, Christian Self and Grey Duddleston. With the release of their single “TREATZ”, we experience a drugged-up, early punk revival, simultaneously calling to mind Dead Kennedys and Blink-182. Will the rest of the new EP have the same modern-yet-nostalgic feel? We catch up with the trio to find out.

Vinyl Mag: You’ve all been part of several bands before forming Lowbanks. What made you come together as this particular group?

John Graffo (Guitar/Vocals):  Grey and I both played in a couple of metalcore bands back when we were in high school and actually played at least one show together. Those bands both sort of fizzled out and then me and Grey became friends in college. We both had outgrown the metalcore stages of our lives but really missed playing music. Eventually, we ended up living together and writing songs in our free time and that eventually became Lowbanks.

VM: How would you describe your sound?

VM: You all hail from Atlanta. What are some of your favorite Atlanta bands?

JG: As soon as I saw that question I had about 15 bands pop into my head but I’ll limit myself. Concord America are great dudes making great music. Freezerburn is awesome. I’ve been listening to loads of Turf War for the last six or seven months.

Grey Duddleston (Drums): In addition to Johns, I always fall back to Hello Ocho, Kelsi Grammar, and Slowriter.

VM: You released your debut EP, Lowbanks Forever, in April. How have you guys evolved since then?

JG: That release, while maybe not being the strongest collection of songs, was a pretty big point for us. Before that, we’d only played about three shows in like, a year. Pretty much all of our development as a group happened after that – we started consistently playing shows, we started exploring new influences, and we started working a lot harder to make the music we want to make.

VM: Since you’re a fairly new band, we have to ask: how’d you come up with the name Lowbanks?

JG: Lowbanks was something I just thought up one day. I honestly, don’t even remember where it came from! But we wanted something that didn’t have any other meaning – something that wasn’t a common phrase or anything, something that would only represent our music. Of course, a couple months later we found out Lowbanks is a city in Ontario, but what are you gonna do? Haha.

VM: We’ve heard you cycled through a few guitarists before deciding to just be a trio. What made you decide to drop any fourth members?

JG: I guess we just work better as a trio. After we lost our old guitarist David, we were actually playing as a trio while we waited to find someone to replace him. It was only after a load of practices and a few shows that we finally said “Damn, this works, let’s just be a trio”

GD: Yea David was one of the best musicians I’ve ever played with. He had that awesome combination of talent and commitment that we still aspire to have – But him leaving allowed for such a different sound and we’re all really happy with the changes.

VM: What’s your songwriting dynamic like? Does one of you primarily write lyrics?

JG: Usually I’ll write out a guitar part and bring that to the guys at our space, and we’ll jam on that and see where it takes us. Sometimes I have ideas for full band arrangements, but usually we just jam over and over until we’re satisfied. As for lyrics, I write some, Christian has written some, Grey’s even written a few – it’s pretty collaborative.

VM: Tell us about the inspiration behind “TREATZ”. What’s it all about?

JG: “TREATZ” was written for a special lady in my life. It’s about being in love, but compares that feeling to the feeling of being drunk. So it works as a love song and a “party” song I suppose.

VM: Any touring plans for the coming months?

JG: Hopefully! Grey and I are finishing up school at the moment, but even still we’re trying to get some things planned for our days off and for next Summer. We definitely have some local Atlanta/Athens shows coming up though!

VM: What’s next in terms of recording? When can we pick up your full-length album?

JG: We’re currently writing the rest of our full-length. We’ve got a bit more to go on it, but our tentative goal is to be in the studio by March 2014. As for when it’ll come out, we’d like to see a summer release, but if it takes us a little longer to make the best record we can then so be it.

*Atlanta readers! Be sure to catch Lowbanks at their show at 529 tomorrow (Dec. 11) if you know what’s good for you!

1 thought on “An Interview with Lowbanks”