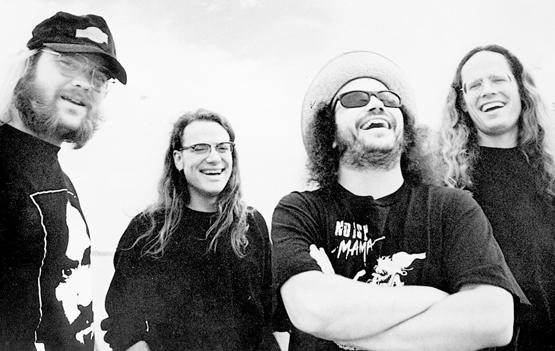 When Whiskeytown was merely a blip on the mind of a 19-year-old Ryan Adams, one alt-country group was already a step ahead. Formed in St. Louis in 1992, The Bottle Rockets – founded by Brian Henneman, Mark Ortmann, Tom Parr, and Tom Ray – treaded between the then-wide lines of punk and country. With the release of Bottle Rockets and The Brooklyn Side in 1993 and 1994, respectively, the band pulled the trigger on a roots-rock revolution, meeting eager listener and media acclaim.

20 years, nine releases and two new members later, BROX – as their fans affectionately call them – is still as fresh and relevant as ever. And on November 19, they’re proving it with Bottle Rockets and The Brooklyn Side Reissues, a deluxe set complete with two discs of remastered tracks and 19 unreleased bonus tracks. Fans will even be able to scour a 40-page booklet which sums up the band’s massive role in the 90s alt- era and includes contributions from the likes of Lucinda Williams and Steve Earle.

So, remarkable musical history aside, what’ll you experience when you take a listen? In many ways, Bottle Rockets is exactly what you’d expect from an early alt-country record: it’s loud, it’s fast, and for the most part, it’s fun. Its country roots are bold and apparent. Take “Gas Girl”, the record’s (insanely brief) second track: a Southern-style, simple guitar is the perfect backdrop for Henneman’s twangy vocals, bellowing about being in love with a gas station girl. Quite the country topic, and did we mention Henneman often sounds alarmingly like Michael Stipe?

But we have to admit that we were surprised at many clever and incredibly pensive lyrics on the album. “Wave that Flag”, for example, is a commentary on the widespread display of the rebel flag in the south today: “Maybe bein’ a rebel ain’t no big deal/But if somebody owned your ass/How would you feel?” There’s no denying that a message like this is refreshing to hear from a country-influenced band. Similarly, “Got What I Wanted” warns about the dangers of cheating, while “The Very Last Time” nearly bubbles over with anger toward a lover.

The great thing about this reissue, though, is that Bottle Rockets doesn’t have to end with “Lonely Cowboy” like it usually does. Listeners will be thrilled to find 13 previously unreleased tracks, including 1991 collaborations with Jeff Tweedy (of Uncle Tupelo and Wilco) and Jay Farrar (of Son Volt). These backing vocals and instrumentals add a more mature dimension to tracks like “Indianapolis” and “Idiot’s Revenge”.

A side-by-side listening of Bottle Rockets and The Brooklyn Side proves that while the former is groundbreaking and largely country-focused, in the latter we see a more mature BROX. The very first song, “Welfare Music”, puts into words the monetary struggle that thousands of Americans face every day; tracks like “Pot of Gold” have a more sophisticated, pared-down country feel, one that’s not so in-your-face. The gang has clearly developed with this release, and knows well enough that a twangy banjo has no place in a tune with lyrics such as, “If I’m just sleepin’/And this is a dream/Let me sleep forever, tell me I’m dead.” Truly, It’s no surprise that this album is the one that skyrocketed the foursome to fame.

But don’t go thinking that this band stopped having any fun in ‘94. Featured on The Brooklyn Side is perhaps the most comical – and our personal favorite – Bottle Rockets track. “Idiot’s Revenge” describes a kind of person all of us have met. Here, they hilariously parody a girl that pretends to like Dinosaur Jr., thinks she’s “sophisticated” and “political”, and is too good to listen to this insulting song written about her. “Radar Gun” pairs edgy instrumentals with a mockery of police officers, and, finally, “1000 Dollar Car” warns about buying a car that “ain’t worth shit.”

Again, following The Brooklyn Side are 6 bonus tracks, most of which are acoustic or live recordings at Mercury Lounge in New York. Besides being a rare glimpse into the 90s music scene, these recordings prove that the Bottle Rockets are just as talented live as they are laid down on a record. Check out “Farmer John” for an ideal example of their live flair, and make sure to pick up the entire compilation in November – your inner southern punk (it’s there, we promise) will thank you.