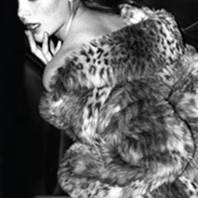 Unless you’re Lady Gaga, it’s damn near impossible to harken back to early Madonna and 80s glam rock in a totally modern way. Enter Kitten, the youthful, L.A.-based electronic group fronted by 18-year-old Chloe Chaidez. Having already toured with the likes of Paramore and The Joy Formidable, it’s no surprise that Kitten’s new EP, Like A Stranger, is as mature as it is totally addicting to dance to.

The EP’s title track, with an unabashedly Madonna-esque title and “Vogue” kind of vocal interlude, is also reminiscent of modern acts like the Eurythmics and Metric. Booming over old-school electronic beats, Chaidez’s voice shakes you to the core with its indescribable mixture of power and warble. “Yesterday” works in a similar way, but there’s an undeniable hip-hop flair to the glam instrumentals of the track. Clashing with the chorus’s moody, 80s goth air, Kitten successfully incorporates two distinct genres to create one of their very own.

The album slows down a little with “I’ll Be Your Girl”, in which Chaidez exhibits her voice’s adaptability. Truth be told, the instrumentals of the track would be a little cheesy without Chaidez’s bellows and whimpers, something the group is undoubtedly tuned in to – again, this fivesome has mastered the art of toeing genre lines. Next up, “Doubt” has a totally primal, animalistic feel. For the first time on the album, one of the male members of the group takes the mic alongside Chaidez, a fact that doesn’t go unnoticed; right as we were beginning to think the songs on the album were all a bit too similar, that extra voice kicked the EP into a third dimension.

“Graffiti Soul” is one of our favorites, perhaps because it seems like something Marina & The Diamonds would write. It’s catchy and entertaining, and the perfect song to lead into the EP’s more serious, ballad-like final track, “King of Kings”. Kitten cap off the album with each member showing off each of their respective instruments – the track is awash with guitar solos, drum interludes, and Chaidez belting at the top of her lungs. Is it too much? Of course. But does Kitten pull it off? Absolutely.

Check out Kitten’s new album Like A Stranger out today!  And be sure to hit her up on her current tour with Charli XCX (dates below)!