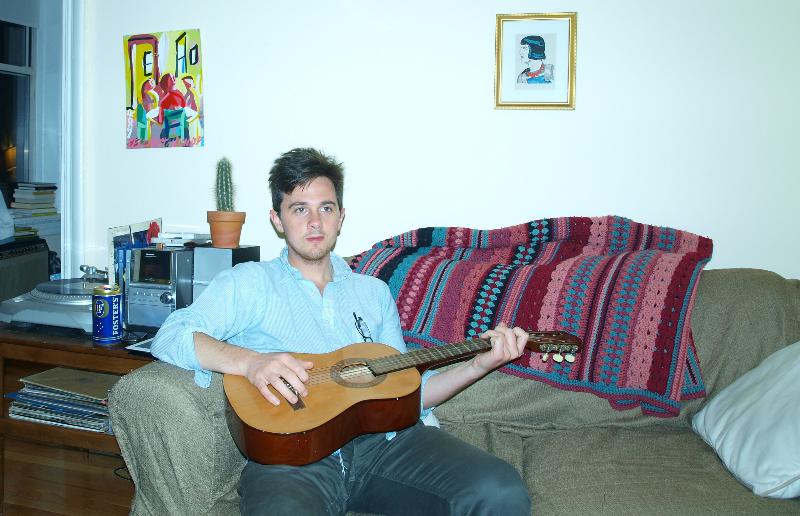 Andrew Cedermark has just released his sophomore album, Home Life, a follow-up to 2010’s major success Moon Deluxe.  In celebration of his recent release (the album came out July 11), as well as his current tour, we decided to ask Andrew a couple of questions.  Check out our conversation below!

Vinyl Mag: Why did you leave Titus Andronicus — when did you decide to do a solo project?

Andrew Cedermark: I left Titus more than four years ago for the same reason people leave a lot of touring bands: I wanted to try my luck living a life in one place, and not always in a car. We toured a lot, and it didn’t agree with me. It wasn’t my music. I was tired of my body smelling like yogurt and wanted to experiment with things like gardening and laundry. On this, my first tour supporting my own music, however, I find myself having a really good time

VM: Tell me about your new album, Home Life — there are some very personal, honest lyrics- what is your writing process?  How long did it take you to write the LP?

AC: I suppose my process is to not simply go with the first, second or third idea that comes, but to compile all ideas that I perceive to be good into songs in whatever way seems most compelling. That obviously happens with varying degrees of success. Writing the lyrics, I spent a lot of time at the library trying to come up with things that I hoped would not be meaningless or pointless.

VM: What was the inspiration behind “Canis Minor” and “Canis Major”?

AC: Directly, these songs are named after a pair of constellations, and I suppose that’s a kind of inspiration. When writing lyrics, all you have to do is write down what you think or feel, make it more vague, then make it more grand, research when people have said something similar to what you are trying to say, incorporate that, and hope that that process offers each listener her own way into the life of that song. Given that, anyone’s guess is as good as mine.

VM: You got a solid review in Pitchfork for Moon Deluxe — they compared you to Jeff Mangum of Neutral Milk Hotel – high praise! How do you feel about that comparison?

AC: The truth is that when I see a good review I tend to think about the better reviews some of my friends have received. As for Jeff Mangum, it is a far-too-generous comparison, probably one that the writer came up with when struggling against a deadline. That is the reality: you can say anything on the Internet. Overblown sentiments flourish where content is king. If I really had anything in common with Jeff Mangum, I’d likely be a beloved and famous rock-and-roller, but as things go we made $50 last night in Baltimore. To answer your question directly, of course it feels great to be compared to one of the indie rock’s genuine marquee talents. But is the indie-rock pantheon holding a place for me? No! As for reviews, all are welcome.

VM: I’m noticing a lot of bands releasing songs on cassette tapes now — what inspired you to release your split on cassette?

AC: Over the course of several years during which I was recording an enormous amount of music, it just happened that not having released any of it began to make me sad. So I wanted to handmake a product that reflected the care I believed I had put into the music. By this time in history it was coming to be widely agreed upon that CDs were just MP3s plus waste, and I couldn’t afford to press my own record, so … tapes. And I made a box to go with them and sold them over the Internet with color-printed booklets of photographs I had taken, with lyrics handwritten all around. That was really my first release, “Two EPs.” I realize now that this isn’t the tape release you asked about though. A label in Charlottesville run by some friends asked about the possibility of releasing a split tape with a band featuring some friends in the almighty Charlottesville revue Drunk Tigers, and I said yes. The same logic was at work here as above.

VM: What is next for you?

1 thought on “Words with Andrew Cedermark”