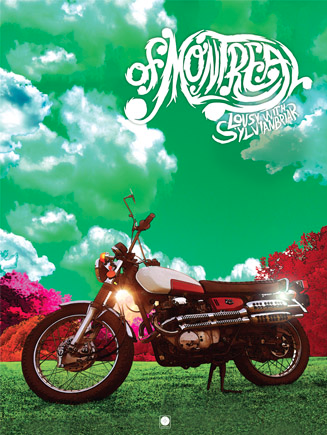 of Montreal is the kind of band that wanders in and out of its time. At the height of fame for Kevin Barnes and crew, around the Hissing Fauna era, their sound was modern and fresh. By Paralytic Stalks, the band propelled into the future, prompting the loss of a few unprepared fans.

With the release of the single “fugitive air”, we expect that lousy with sylvianbriar – to be released October 8 – will force the listener into a time machine set to the 1960s. It’s even apparent in the album art, a psychedelic swirl of intense colors and type.

As much as we hate to make this cliché reference, it’s impossible not to hear the Beatles in this tune. The opening guitar riff screams Harrison, while the sweet ooh-ahhs at the chorus harken back to McCartney. And, much like a Lennon signature, the track feels entirely lyric-driven. This retro sound is no surprise though, considering of Montreal ditched digital embellishments in favor of a 24-track tape machine.

That’s not to say that today’s listener won’t adore this single, and, ultimately, lousy with sylvianbriar in its entirety. In fact, the track fits comfortably into 2013, considering the rise of surf-punk bands like Wavves, FIDLAR, and Bass Drum of Death. Finally, it seems, the past, present, and future have collided for of Montreal.