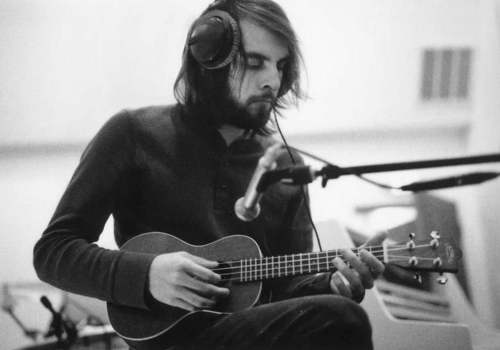 With the warm, lazy summer months ahead, what could be better than a pensive indie album with fantastic acoustic instrumentals? Enter Valaska’s new album, Natural Habitat. The brain-child of Chicago native Dave Valdez, this record will uplift you with its often cheery acoustic guitar, then force you into a state of reflection with its unabashedly meaningful lyrics.

Produced by Copeland frontman Aaron Marsh, the album is clearly the result of much introspection and a complete turnaround in musical style – Natural Habitat is far more raw and thought-provoking than Valdez’s 2010 EP. Also notable is how influenced Valdez obviously is by acts as diverse as Elliott Smith, Bright Eyes, Iron & Wine, and Of Monsters and Men. This mash-up, whether Valdez is conscious of it or not, gives the listener a positively chilling indie experience.

The Elliott influence is apparent – and incredibly poignant – from the first track, “On the Surface”. Vocal layering and an emotional acoustic guitar pave the way for the song’s insightful take on man’s tendency to only scratch the surface of things. The record ironically picks up a bit with “Spanish Needles”, a tune entirely about the inevitability of death. Another favorite is “Golden Age”, a track that reveals Valdez’s experience touring with pop rock bands for a large chunk of his life – it’s undeniably catchy, even sweet, whisking us away to a different time and place.

By “Wildfire”, we’re hooked. The song presents a situation that everyone is familiar with: the promising nature of a fresh relationship, but also the care involved in seeing someone new. The title track, toward the end of the album, provides a comprehensive summary of Natural Habitat and Valdez’s new musical direction. It’s all about being alone, thinking everything through, and the array of emotions that coincide with that experience. Raw and whimsical, the track helps to wrap up the album in a beautiful little bow.