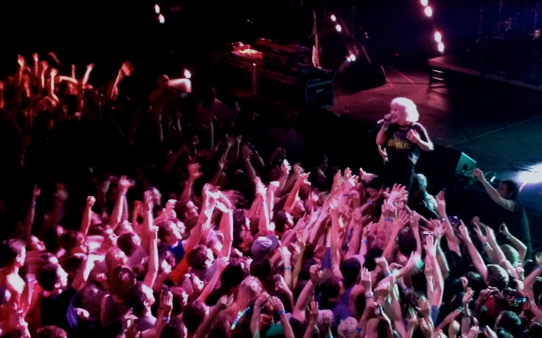 Crystal Castles provided an incredibly contradictory show in the best way on April 17. Though Glass and crew entered the stage to a near riot – the audience had waited over an hour for Crystal Castles to come on – the stall proved to be entirely worth it. Opening with “Plague”, the first track off their new album, (III), it was quickly clear that this set would be all about digital, electric glamour with a wash of old-school punk ideals.

Soon enough, the trio – consisting of founding members Glass and producer Ethan Kath, and touring drummer Christopher Chartrand – dove into tunes from their previous album, including “Baptism” and “Suffocation”. This is when things became truly rock ‘n roll. Between Kath’s impressive electronic instrumentals and Chartrand’s mind-blowing drum solos, Glass struggled to pull away from a security guard and crowd surf several times, and even began taking massive swigs of whiskey and spitting it over audience members.

We were most thrilled when we heard the first few beats of some of our old Crystal Castles favorites: “Crimewave”, “Alice Practice”, and a portion of “Vanished”, to name a few. By this point, Glass knew she held the crowd in the palm of her hand. She stood before thousands of energized fans, slugging from that same bottle of whiskey and twirling the microphone in her hand, as if teasing us to beg for more.

And “more” is what we got: among the trio’s encore songs was “Not in Love”, their undeniably catchy cover featuring Robert Smith. While we danced nonstop for the last minutes of the show, we couldn’t help but think how in love we were with Crystal Castles’ live performance.