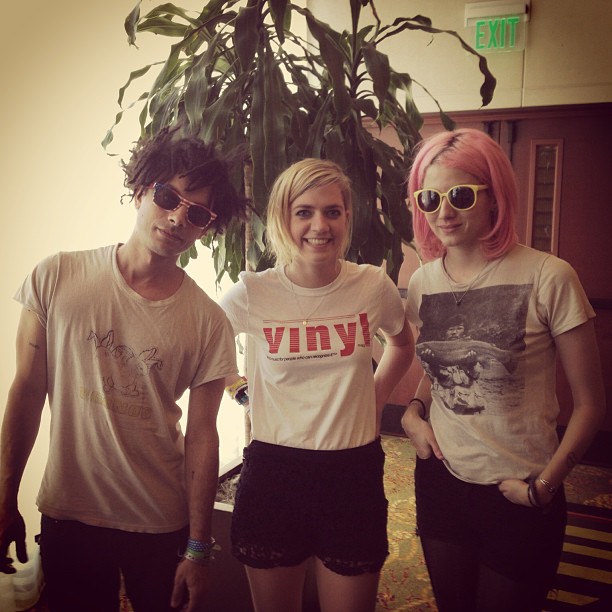 Hunters was my last interview at SXSW, and I have to say, I couldn’t have asked for a better one.  Because it was the last day after a long week of running around frantically like a headless chicken, I was feeling a little fried, and forming full coherent sentences was getting a little complicated (more than usual).

Fortunately for me, Izzy Almeida and Derek Watson – Hunters – are two of the chillest, most conversational interviews I got all week.  To cut to the chase, these dudes are just plain cool (cheesy? Deal with it).  It was one of those interviews that felt like just hanging out rather than firing questions and receiving formulated answers.

We found ourselves a quiet little place to sit and talk, and we had ourselves a nice little chat about their SXSW experience, their influences, and what is next for them.

If you haven’t listened to Hunters, you’re in for a treat.  Be sure to check them out.  The duo has just signed to Mom+Pop and announced a tour with Bleached.  So check out this interview, check out their tunes, and then be sure to hit up their tour.

VM: How has the audience response been?

Izzy: It’s been great, actually, yeah. I think it’s been a good opportunity to meet more people and see a bunch of bands. And it’s nice out and we’re coming from New York – it’s so cold there, so I’m enjoying it.

Derek: We’ve been running into friends in other bands, you know, all playing in one place…

Izzy: And you play some pretty weird shows, like playing after a rap group, and it doesn’t make any sense, but somehow the crowd’s into it and you’re like, ‘okay, cool!’

VM: It’s a really mixed crowd, but it’s fun.  It keeps you on your toes, you know? So do you have a favorite venue or show that you’ve played so far?

Izzy: That was fun, yeah.

Derek: I’m trying to think what else… it’s kind of all a blur… oh, no! The Gypsy! That was the best one.

Derek: Yeah, there was one monitor, and it wasn’t really working, so we couldn’t really hear ourselves, but it made us feel comfortable. You know, it made us feel like we were doing something we always do, so yeah, that was probably the best one.

VM: So I read you met at your job, and then you never went back.

Derek: It was a horrible job.  It was one of those things were you’re in New York and you have to get a job quickly.

Izzy: It was definitely a temporary job, like, ‘okay, I’ll do this for now, and then I’ll go find something else,’ you know, but then we found each other. That’s really cheesy.

Izzy: I do actually, that’s what I do on tour!

Derek: That’s her next job! She just comes up with different cards and then sends them into Hallmark (laughs).

VM: So, did you find your sound the first time you ever played together?

Izzy:  No, it was really weird and easy for some reason. I don’t know why.  Well, I think the reason why is we had an adventure, playing together…we had talked about music before and had a lot of similar tastes and backgrounds.

VM: You’ve been compared to the Stooges and Sonic Youth. Do you like that comparison – do you think that’s accurate?

Derek: I don’t know if it’s accurate, but it’s nice. I mean, those bands are awesome.

VM: Izzy – I read that you’d had a bunch of bands in your head since you were a kid. Was it always the same genre?

Izzy: Oh, when I was way younger, it was really cheesy stuff, like…it’s embarrassing. But then when I started getting more into rock and stuff, that’s when I started trying to write rock songs, but they were really bad because I was really young. I still remember them because, wow, they were awful. They’re going to the grave with me (laughs).

Izzy: No way. It’s definitely one of those secrets you have to keep.

Derek: And I think maybe the Sonic Youth thing comes up, because we use tunings for our guitars and stuff, so maybe in that way I could hear it. And, you know, since it was a guy and a girl, I think people gravitate toward stuff like that automatically. In that way it makes sense.

Izzy: The Stooges and Sonic Youth were definitely a big influence for me, especially coming from Brazil where it was hard to find out about bands. So for me finding out about the Stooges and Sonic Youth was already a huge thing, like, ‘oh my God, I found it!’ And there was a scene in Rio that knew about those bands, but I wasn’t part of it. Like, my brothers and sisters were listening to stuff that’s just not good, and I was just trying to find stuff out on my own, you know?

Derek: Yeah, and they’re really good intro bands, bands that you can start to dig with.

VM: So how did you get put in touch with Nick from the Yeah Yeah Yeahs to mix you?

Derek: We just knew him from around, and the timing was just such that they were on a break – like they had just finished touring, and they were kind of taking a break to sort of regroup and have a little time for themselves – and he was down; he was like, ‘oh, I’m kind of interested in doing stuff with you.’ And we didn’t have any money, so for someone to offer to do it for free was kind of, you know, from the heavens. No matter who would’ve asked us we would’ve said yes, to be honest. It was just a really lucky situation. And he was super cool about going back and forth with mixes and stuff like that, so that worked out really well.

VM: Wow, that’s awesome. So, [Izzy] what was it the Village Voice said?  Did you read that? They said that when you’re on stage, you’re the world’s most rhythmic stroke victim.

Izzy: I feel like that makes sense actually, because sometimes when I see a video of a show or something, I feel like I’m just not even in rhythm, like I don’t even know what’s happening. I think it’s funny; it’s cool. I don’t care.

Izzy: I haven’t been going to that many shows, because I’ve been so sick!

Derek: Wow, I’ve seen a bunch.  Believe it or not, I think Riff Raff was kind of awesome. I wasn’t expecting that. I wanted to see the dude from Hawkwind – he was doing Space Ritual, but I couldn’t go – I think we were playing at the same time. That was kind of a bummer. We saw Pangea and FIDLAR – that was good. We saw like a song of Bleached.

VM: Aren’t you touring with them?

Derek: Yeah, almost as soon as we get back we’re leaving.

Izzy: Yeah, we’re recording and then we’re going on tour.

Derek: It’s hard to say though, I feel like you just see so many things here. I might wanna see Waka Flocka tonight, if that’s possible. It’s like a guilty pleasure.

Derek: Oh, is that tonight? I didn’t have any plans to do that, but that could be kind of funny. Where is that?

VM: Is that that MySpace secret show or something?

VM: Yeah, every time I hear about MySpace now it’s associated with him.

Izzy: Maybe it’s an urban legend or something, because I don’t know how I found out about that, but that’s all I hear.

Derek: Yeah, it’s like I think of them together, which is weird, because I haven’t thought about that website in so long.

VM: So, you’re touring, and then are you coming up with anything new?

VM: And you’re coming to Atlanta?

Derek: Yeah! Are you gonna come?

VM: Yeah, I’m from Athens, which is right there.

Derek: I’m not sure where we’re playing but…

Derek: Oh, that’s cool. Yeah, we played the Drunken Unicorn there once, and the Masquerade.

VM: Did you play upstairs there, or…?

Izzy: It was like a green room, for real – everything was green.

Derek: Yeah, it had a high ceiling, but there were no windows, and there were these really weird, greasy chairs. It was fine. I mean, it was actually really funny. I actually liked the stage there.  You could really get to the audience.

VM: Yeah, that’s cool. The floor though, if you’re in the audience, I always feel like I’m gonna fall through. It freaks me out every time.

VM: Well, cool, we’ll see you in Atlanta then!

2 thoughts on “SXSW with Hunters”