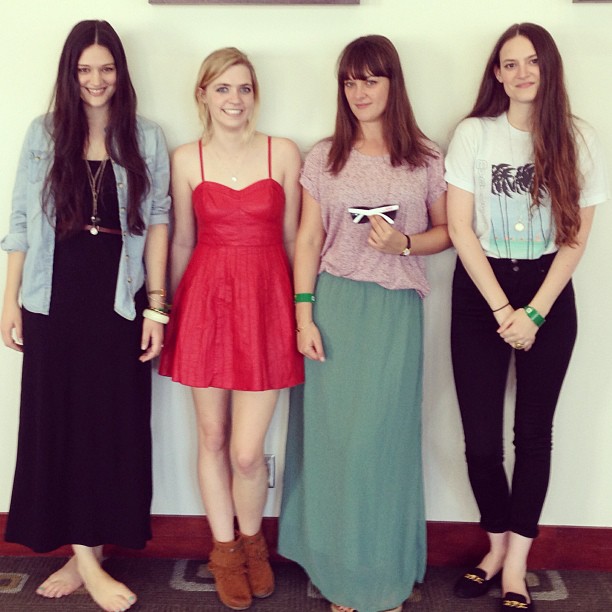 You can’t not love The Staves.  As someone who is prone to more than my share of girl crushes (I’m talking about you, Sarah Balliet, Alice Glass, Carrie Brownstein, Missy Gilbert…), I gotta say…these ladies are awesome.

The Staves gained popularity in the US through their tours with The Civil Wars and Bon Iver, and they recently released their debut full length Dead & Born & Grown in November.  And since it’s been on repeat on my iPod since it was introduced to me, I was super pumped for this interview.

I met up with Emily, Camilla, and Jessica Staveley-Taylor in the convention center in downtown Austin on the third day of SXSW.  I was greeted with genuine friendliness and free chips and salsa (give me food, I will love you).  After a little bit of chit-chat, we got our interview on.  So go ahead and live variously through my hangout session with The Staves.  Enjoy.

Vinyl Mag: I read that you grew up listening to Crosby, Stills & Nash and The Beatles, which is kinda what I grew up with, because my mom was always listening to it. So, how does that effect your writing? Does that have an influence on you?

Jessica: We are very holy people.  We like to think of ourselves as the Holy Trinity. We always try and play saintly locations.

Emily: I hadn’t realized that there were so many churches.

VM: I was like, that can’t be a coincidence, but apparently it is.

Jessica: St. David’s here we played last year, and it was like the highlight of the week for us, so we’re really excited to play there again. It was so cool.

VM: So, you’re all sisters?

Jessica:  It’s definitely not [the normal sibling dynamic], but it works for us though. We get along really well; we always have.  We always hung out together at home and had a shared group of friends and shared tastes, so it was never like a question really. We work well as a band, so we always have so much fun together.

VM: So what are your ages?

Jessica: (Points to Emily) She’s the eldest, I’m the middle, and she’s the baby (points to Camilla). Can I just say that?

VM: So you’ve toured with bands like The Civil Wars; how was that?

Camilla: It was really fun. That was like our first US tour, so it was really cool…mostly in the south. We were on the tour bus with them, and that was like a whole experience in itself. It was like ‘ah it’s our bus’ it was so cool!

Emily: It was lovely. We got to play some cool places.

Jessica: And we played here at the Paramount.

Emily: Yeah, it was crazy.

VM: So do you think crowds or fans are different here in the US than in the UK? What are the differences?

Emily: I don’t know. I think audiences are different, like [there are] ifferent audiences depending on who you are playing to…I don’t know if there is a huge cultural variety. Back in the UK, I guess our experience has been that Americans have been more instantly vocal with their reaction.

Jessica: On that tour with The Civil Wars…[the American audience] would just be like so friendly as we were on stage. They’d be like, ‘you guys are great!’

Jessica: It was just so nice. I think maybe English crowds are a bit more reserved.

VM: So do y’all all write, or does one person do the writing?

Emily: Some songs will be more one person than the others, and some songs I couldn’t really remember who wrote which line. It’s just kind of all three of us. It depends on a lot of things.  When we first started, not living in the same place, there were quite a few miles between us, so we would write individually and then come together and as we learned the parts of each others songs, they’d change and become a ‘Staves’ song rather than like a ‘Jess’ song…it’s basically pretty collaborative.

VM: So you just released your debut album, Dead & Born & Grown. How did you come up with the name?

Jessica: Well it’s title track.  It’s one of the songs on the album, so we called the record that because that song was one of the first songs we’d ever written together years ago…so it was kinda the beginning of everything, so it’s got a really special place for us. It’s got a really nice..what’s the word…

Camilla: It’s got everything from the beginning to now…so it’s kind of like a compilation of everything – some of them were written knowing we would make an album and needed more songs, and some of them we’ve had written for ages, so it’s sort of like a ‘best of’…

Jessica: (Laughs) We were gonna call it like the ‘Greatest Hits’ but we thought maybe that wasn’t the best title for it.

Camilla: ‘Best of the Staves!’ (laughs)

Emily: We just saw someone while we were trying to cross the road, and we were waiting for the lights and this guy in front of us just started walking, so I started following him, and he just turned around and said, ‘don’t follow me – I’m drunk!’  And sure enough cars just kept passing ahead, and I thought that would be a quite good album title.

VM: So I’m getting an exclusive preview for your next album title.

Jessica: (jokingly) Oh, yeah- we’re always inspired by everything around us.

VM: So The Guardian compared you to Mumford & Sons. How do you feel about that?

Jessica: I think that Mumford & Sons fans would be very disappointed if they bought our album. Especially bangers. No bangers on there.

VM: I’m actually not a huge Mumford & Sons person, so that was kind of a surprising thing for me too. It just seemed a little random.

Emily: It’s strange, because then people put Laura Marling and Mumford & Sons in the same category.  They’re so different..like what?  I think it’s just because they come from the same time, and they are kind of in the same group of people, but musically, I don’t get it.

Jessica: I think because Mumford have done so well there is kind of like an umbrella term for those types of bands – which we’re happy to be under. They’re great, and it’s always great when there’s a band that gets the success it has, and it kind of opens the door for people that are doing harmonies and playing acoustic guitars…something that’s not super pop or R&B. We’ve been doing this for so long, we’ve always listened those records like The Beatles and Crosby, Still & Nash, and for a long time that wasn’t cool. We were just kind of rattling around at home loving that music, but no one else was really into it. It seems like now there’s a real awareness I think of that whole thing. So bands like that have done a really good job. It’s cool.

VM: So who are you most looking forward to seeing?

Camilla: Mikhael Paskalev, yeah.  Make sure you get a chance to see him.

Jessica: I don’t know who else is playing!

Camilla: It’s so tricky when you’re playing.  You [know that there are] all those people that you want to see, but it’s quite hard to actually find time to get to the places.

VM: How many shows are you playing here?

Camilla: I think it’s three. Not like a horrendous amount.

Emily: And then there’s like a session or so.

VM: So what is next for you after SXSW?

VM: Are you coming to Georgia?

Jessica: I hope so!

Camilla: I don’t think the routing is 100 percent finished yet.

Emily: Every time I see it, it’s changed.

Camilla: If not, we’ll probably be kind of close by. I think it’s going to be a short tour, like six weeks or something.

Jessica: Your country is massive. Touring at home is like two weeks, max. You scratch the surface each time in America, which is kinda the exciting thing about it.

1 thought on “SXSW with The Staves”