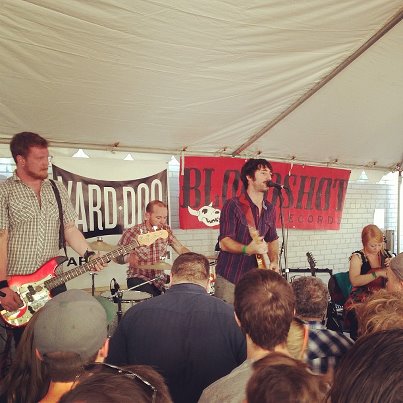 I have serious fangirl love for Murder by Death.  I jumped on the bandwagon a little late after discovering them when they opened for Say Anything at the 40 Watt Club last year.  Since then, I’ve procured all of their albums, mildly YouTube-stalked them, and – now – gotten the chance to interview guitarist/vocalist Adam Turla at South by Southwest.  Serious highlight of the week.

So enjoy!  And be sure to catch them on their current tour this year!  You’ll thank me -everyone should get a chance to see them live.

Vinyl Mag: You started in 2000, and you have six albums. So it’s been go, go, go. How do you keep coming up with new stuff that quickly?

Adam Turla: Six full-lengths, yeah.  I’d say the albums come out every two to two and a half years, and we’ll work really hard on an album – writing and recording – and then we’ll tour for like a year and a half, and then we’ll go back and write again.  It’s just sort of a system at this point. Part of that comes from [that] this is all we do – my friend, Will Whitmore, describes us – and him as well – as ‘blue collar musicians.’ We have to work. We can’t take the luxury to take some time off and spend the money that we make, because there is no money. Not enough at least. We have to keep that sort of system.  I’m at that point now where I’m like, ‘alright, when I get home from tour in June, that’s when I have to start writing again.’…you have to stay organized and stay efficient. That means that I’ll never force an album out…unless I really want to put an album out.

VM: Are you the kind of person that sits down and has set hours for when you write, or just as it comes?

AT: I’m not the Ernest Hemingway, like the 10-2 thing or whatever.  It’s the opposite.  It’s more like a time where I don’t think about songs very much at all until I’m writing…and then I’m thinking about them all the time. I don’t even write with a guitar.  I just write everything in my head.  So a lot of it happens when I’m like camping or walking somewhere, and I get an idea and try to write it down before I forget it.

VM: So you said William Whitmore…I read that he did vocals for you on the phone?

AT: Oh yeah, yeah!  He’s one of our oldest friends in the music world, and on our second album we wanted him to sing backup vocals on this song, and he was…I think he was here – at South By [Southwest]…He called me from a pay phone, and we just held a microphone up to the phone and recorded it, and it actually sounded pretty good.

AT: Yeah. We couldn’t believe it worked.

VM: Do you have anymore stuff like that – that you just kind of improvised?

AT: The girl that just walked by is a great musician named Samantha Crain, and she actually sings two songs on the new album.  That was sort of like…she lives in Oklahoma, and we were recording in Dallas, and we were like, ‘you should come down and sing on these songs.’ [And she said] ‘ok.’ And then on the new album, there’s a guy named Thor Harris from Swans.  He makes his own instruments, and he’s friends with Scott, our keyboard player, and he happened to be in the Dallas area…and he just came one afternoon and put down all these weird sounds on the album.  Had never heard the songs. Strange noises. That guy’s awesome.  Swans are crazy.

VM: So you’ve been called a band without musical borders. Are you good with that definition?

AT: I don’t care whatever it’s called. I guess it’s pretty accurate. We try to implement elements of like…the world? Music where it’s like…this has an Irish melody, this has a Latin beat. I’m not here to name anything. People ask, ‘how do you describe your band?’ The whole point is that I don’t want to do that. I don’t want to just be a country band…I don’t want to be a rock band. I’m just gonna write some songs, and that’s it.

VM: It’s really cool because you’ve kind of come up with something new, which doesn’t happen very often. And there’s a really big variety in your sound. A lot of people just keep coming out with the same album over and over, [and you don’t].  But [at the same time] it all sounds like Murder by Death.  That’s pretty impressive.

AT:  Yeah. Thank you. You know, they say you can’t be everything to everyone.  Like when you pick a band that is a genre-specific band, and they’re doing something that’s really modern Americana, a bunch of people are going to love it, and you’re gonna be the kings of that…you can be the king of that genre. But you’re also gonna have people that are like, ‘God, more of the same.’ So my philosophy is more like, you can be everything to some people, and I think a lot of people are attracted to the fact that our albums are different from each other, and there’s a lot of variety on the albums. We have really great, loyal fans, and they are often people who don’t like a lot of stuff out there. They’re like, ‘I don’t know why, but I like this.’  It’s how I am, too.  I mean, I don’t like a lot of stuff, but when I like something, I love it.

VM: So is the name a reference to the movie?

AT: Yeah I love it…but yeah. I regret naming the band that.

AT: Because we still get people that think we’re a metal band or something.

VM: Yeah…I saw y’all open for Say Anything, and I didn’t know who y’all were and I was like…’Murder by Death?’  And then I was totally surprised.

AT: We’ve also done so much cross-genre stuff. Like that tour was completely different than what we usually do. This is a country/rockabilly showcase [today], and tonight we’re playing with Clutch – stoner/metal/blues band or stoner blues and rock. And Monday, we played with all these hipster bands that were like dancing, so I mean, we jump around  a lot. And the name – I hate it, because we get pre-judged a lot, but also it’s kind of memorable. Maybe it’s helped somewhat.

VM: So there’s a lot of whiskey and devil references.  I mean, it makes me feel good when I listen to it, but there’s obviously some darkness. Are you mainly the writer?

AT: Yeah I write the lyrics. I’m just more attracted to dark stuff.  A lot of our songs are sung really low and then work their way into sort of a sad and beautiful triumph.  That’s one of the things I really like to do is twist what can happen in a song. Form a four-minute song that’s actually a book or a story.

VM: Who have a liked most so far at South by [Southwest]?

AT: Shovels & Rope. We went to this show at Willie Nelson’s ranch with this band, Shovels & Rope. Our tour manager has been listening to their CD a lot. They were just a great two piece. They’re definitely kind of the hot show right now, but I think it’s merited, and they’re good. The girl can sing.  The dude can play.  It’s simple. That was really good. I’m trying to think if there’s anything else I’ve seen that was awesome. A lot of stuff that I liked. That is the thing that I was most impressed by.

VM: So what’s next for you guys? I know you’re doing Shaky Knees.

AT: Yeah. Man, it seems like that festival…everybody’s talking about it. My friend, Tim is the guy who booked it.  He’s been booking shows in Atlanta for like 10 years, and I just always liked the guy, and we’ve kept in touch. And he asked us like maybe six months ago to do that festival. I was like, ‘Sure man, I’d love to do it. If you’re doing a fest, I’m there.’ And then all of a sudden, he’s done with the lineup and I’m like, ‘sh*t.’

VM: I know. We’re from Athens, and it’s right there, so I’m definitely going.

AT: That’s cool.  That band, Shovels & Rope is playing right before us or right after us.  I don’t remember, but it’s gonna be cool. I was just thinking…I don’t think I’ve ever played a festival in Georgia or Florida.  Never played a southern festival – I think it’s kind of weird.

VM: So what else is next?

AT: May is the weirdest tour we’ve ever done. We’ve got some club dates going up and down to Shaky Knees.  Then we’re flying straight from Atlanta to Europe and doing two weeks in Europe. Then we’re flying straight to the West Coast for a combination of small clubs and small towns. And we’re playing Kickstarter.  We did a Kickstarter, and we have to play private shows – we do two rounds in California. And then we have to fly to do some festivals and do a couple more club shows. And then it ends, we’re playing in an antique store for a Kickstarter event, and then we’re playing a Canadian barbeque contest. And that’s the last show of the tour. They sent me the schedule and it was like, ok…people start showing up around noon, and the feats of strength start around 2 p.m.  They had me at barbeque and feats of strength.

2 thoughts on “SXSW with Murder By Death”