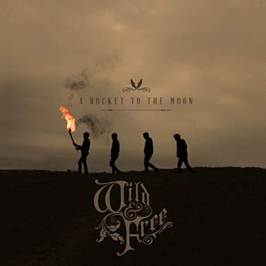 A Rocket To The Moon has been around since 2006, and the band is only just now dropping its second album. A little taken aback? We were too, until we gave the new album, Wild & Free, a listen. This band has matured a lot in their seven years, developing a very folksy angle to their usual pop punk sound – it’s no wonder that they needed a little more time to unleash their potential.

We caught up with ARTTM’s lead singer, guitarist, and founding member, Nick Santino, about everything from the group’s inspiration for the new album to touring with bands like fun. and Motion City Soundtrack. Check it out below!

VM: So, you guys have been a band for about seven years now. Where do you think you’re at right now in your musical career?

NS: I think we are still learning and still growing. There’ve been some changes over the last four years in our band, and I don’t think I could have predicted them if you asked me then. I think that’s the most exciting thing about music – and the most frightening. It’s always changing. You never know what’s happening next.

VM: Who are your major musical influences?

NS: Anyone from Tom Petty to Katy Perry. A good song is a good song no matter how it’s performed. I like to keep an open mind when it comes to music and try to not discriminate against certain types.

VM: What do you guys typically write about?

NS: We write songs about real-life situations. We want our music to be relatable to anyone who listens. We’re big on musical storytelling.

VM: You’ve played with some pretty big bands, such as the Maine, the Cab, Motion City Soundtrack, and fun.. What has that been like?

NS: It’s always great touring with people that enjoy what they do. Touring’s half of the band’s existence so you need to have fun with it. Every so often you’re on a tour where you don’t see eye to eye with another band or band member. But I always look at it like we are all here doing the same thing for the same reasons. And if you’re here for a different reason, go home.

VM: Your next album, Wild & Free, is set to drop March 26. How’d you choose the album title?

NS: Wild & Free was something that I typed into my notes app on my iPhone three years ago in the middle of the night while sleeping in the van on tour. I wanted our album to be very youthful and fun while keeping a mature side. When it came to writing songs for the album I remember digging through my notes and finding “Wild & Free” from a couple hundred days before. We wrote that song and it later ended up becoming the title of the record. I guess I kind of knew in the back of my head that it would be the title of the record before we even wrote it. The record reflects the title pretty well.

VM: To me, the new album has a more mature, almost country sound. What do you think caused such a shift?

NS: Natural growth and touring. We’ve been on the road for four years straight now. Our musical influences have changed and expanded. Our live playing has improved. We never set out to write a country album. I don’t think that is what we have here. But we just played from our hearts and what you hear on this record is the sound of live hearts beating.

VM: What do you think are the standout tracks on the album?

NS: They are all so different. That’s what makes our band “A Rocket To The Moon”. We will play a few pop rock songs then jump into a Garth Brooks cover. You never know what you’re going to get with our band and I think that’s what sets us apart. There’s a track called “Wherever You Go” that stands out most because it’s the most country-sounding song. But it’s also my favorite song on the record, both because of the story and because of the music.

VM: What are your touring plans concerning Wild & Free?

NS: We’re gonna hopefully be on the road all year. I can’t wait to play more of these songs.

VM: In your wildest dreams, which bands would you want to tour with?

NS: Tom Petty and the Heartbreakers for sure.

VM: Where do you guys see this album taking you?

NS: Hopefully, somewhere that I can’t even begin to predict. Fingers crossed.