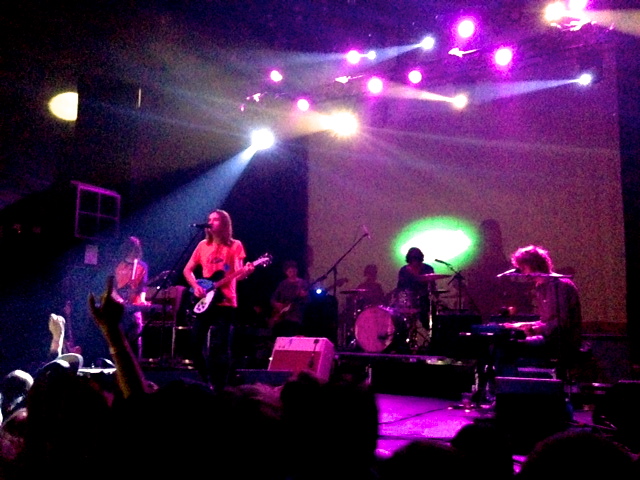 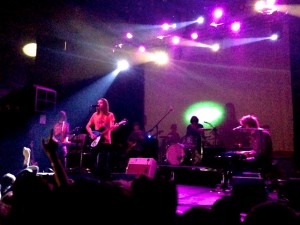 Some concertgoers can’t get enough of upbeat, high-energy shows that keep them dancing all night. Others prefer a more laid-back musical environment, one in which they can simply bob their heads and let the music soak into their skin. We give you the best of both worlds: Australian fivesome, Tame Impala. Their show at the Georgia Theater in Athens on February 23 was a constant mix-up of both types of tune – one song heavy and bouncing with the energy of a thousand guitars, the next transcendently mellow.

As the band walked onstage and began to play, we couldn’t refrain from thinking that their outfits – tee shirts, jeans, sneakers, and shoulder-length mops – were a bit reminiscent of a high school band. But once the steady drumbeat ushered in “Apocalypse Dreams”, all thoughts of amateurism vanished immediately. The crowd was swept into a psychedelic, undeniably Jefferson Airplane-esque paradise, and instinctively swayed happily in unison. The band and audience gained speed through the next few songs, along with the screen behind the stage, which warped from simple, colored lines pulsing to the beat to undeniably 60s-inspired, exotic rainbow patterns. This energy peaked with “Elephant”, arguably Lonerism’s catchiest track. As lead singer Kevin Parker crooned in that oh-so-John Lennon-ish voice, “Well, he feels like an elephant, shaking his big, grey trunk for the hell of it…”, we were all pushed over the edge into an earful of blues-y perfection that we couldn’t help but move to.

Soon, Tame treated us to a trio of our favorite tracks. With “Feels Like We Only Go Backwards”, the insatiable toe-tappers in the crowd became smooth sailors on a wave of chill psychedelia. When repeated whisperings of, “Gotta be above it, gotta be above it…” introduced Lonerism’s first track, though, the audience began undulating excitedly all over again, feeling Parker’s inspirational lyrics washing over us. Finally, the band transferred us to Haight-Ashbury circa 1967 during “Mind Mischief”, a tune with a very – well, there’s no other way to properly sum the vibe up – cool guitar sound.

Tame finished up with the upbeat, drum-focused “Half Glass Full of Wine”, and after an incredible, lengthy jam session – and this comes from someone who typically can’t stand when live bands jam – those at the Georgia Theater were begging for an encore. Thankfully, the crew came back for “Nothing That Has Happened So Far Has Been Anything We Could Control”, a very optimistic song with some unabashedly dark lyrics. I have to say, though, that our moods as we were leaving were much more similar to the song’s mood: as we exited the theater, we felt like we were floating atop a mind-bending whirlpool of rainbow-bright colors and dynamic sound.