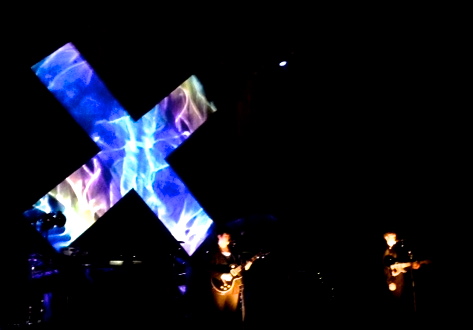 If you’ve listened to even a tiny fragment of a song by The xx – any song at all – you can not only acknowledge that the band is perfect in a very technical, musical sense, but also that the purity of their music provides an incredibly ethereal experience for the listener. Now, imagine it live: the drums reverberating through your very core, voices ever more ghostly, each silence ironically amplified a thousand times over. When The xx played the Tabernacle in Atlanta on February 2, the beautiful simplicity of their music reminded us of why we should be thrilled to be alive.

As we had so desperately hoped, Romy Madley Croft, Oliver Sim, and Jamie xx played a substantial amount from both of their albums, xx and Coexist. Opening with “Angels”, the first track on Coexist, the trio set the mood immediately: dark, emotional, and – appropriately – angelic. We instantly noted that Crofts’ and Sim’s voices sounded nearly identical to the way they sound on the albums – just much, much more intense. Though we were a bit disappointed that the band moved around the stage very little, we soon realized that the gripping, otherworldly nature of the music entirely made up for the lack of movement.

By next playing “Heart Skipped a Beat”, The xx effectively relieved fans of their concerns that very few tracks from xx would be played. Soon after, “Crystalised” was swept through as well, male and female vocals layering beautifully. We were thrilled when we heard Jamie xx’s steel drums opening up “Reunion”, a song that brings in what we believe to be the better half of Coexist. The track was chilling, filled to the brim with emotional tension – that is, until a steady drumbeat was ushered in as Croft nearly whispered, “Did I… see you… see me… in a new light?”

Finally, the trio played our favorite track on the entirety of Coexist, “Sunset”, a song that manages to be extremely dance-worthy while exploring pure heartache. Toward the end of the band’s set, they began to once again bring back older tracks, including “Shelter”, “VCR”, and “Islands”, three of their all-time best, and three that ideally exhibit the unheard-of vocal chemistry between Croft and Sim. By the time the three tiptoed shyly off the stage, the crowd was all but drooling for an encore. And, boy, did they get one. The xx came back with the powerful “Intro”, and promptly ended the night on a much softer note with “Tides” and “Stars”.